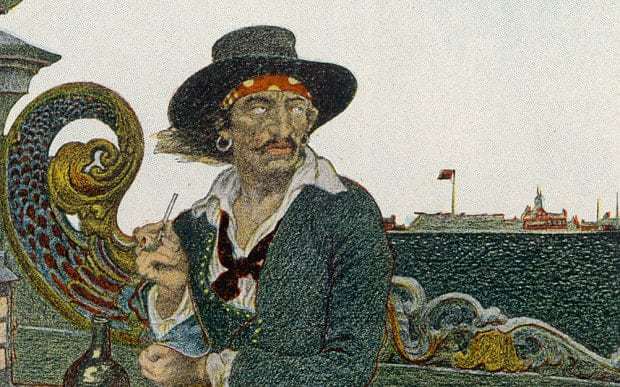 Whether or not Captain William Kidd was a pirate is debatable. For sure he isn’t the notorious pirate that history has sometimes made him out to be. Kidd was a privateer, who was hired to capture pirates after his immigration to New York in the 1690s. He was hired in 1695 to defend English ships from piracy in the Red Sea.

For the most part, this mission was unsuccessful. However in 1698, Kidd and his crew captured the Quedagh Merchant, which held gold, jewels, silk and sugar. Now, this is where the controversy starts. Was the Quedagh Merchant an Indian ship sailing under a French banner, or was it a British ship? According to other reports, it was hired by Americans to transport their goods. The only thing history tells us for sure is that it had an English captain.

Whether or not the capture of Quedagh Merchant was done with Kidd’s approval or not is disputable. Several sources say that once the ship was captured, and they found that the ship was being captained by an Englishman, Kidd ordered the ship freed. It might be the case, that in the end Kidd capitulated because he wanted to avoid mutiny.

This capture was the first time Kidd was accused of piracy. His subsequent trip to St. Mary’s, Madagascar didn’t help matters any. St. Mary’s was a hot bed of pirate activity, and with his visit there, Kidd cemented the charges that would soon be laid against him.

After he discovered the charges against him, Captain Kidd sailed back to New York, and was arrested in July 1699. In 1701, he was sent back to London, where he was initially tried in front of Parliament. He kept his silence during the trial, expecting his allies within the Whig party to save him. They did not.

He was executed by hanging on May 23, 1701 at London’s famed Execution Dock. His body was ordered to be held in a cage on the River Thames, and displayed as a warning to other pirates.

The mystery surrounding Captain Kidd endures to this day. Some historians claim that he was in fact a pirate, and his execution was justified. Those reports claim that he ran his crew ragged, and that he was also guilty of torturing crew members from captured vessels. Other reports suggest that he was a political pawn, who was sentenced to death after refusing to betray his sponsors within the Whig Party.

There is also the mystery of where the goods from the Quedagh Merchant went. Like all pirate stories, there is treasure to be had. People from all over the world have looked for the booty that Captain Kidd supposedly left behind after his death. Supposedly, some of Kidd’s treasure was found off the coast of Madagascar in 2015. Whether it was from the Quedagh Merchant or not is unknown.

Whether or not Captain Kidd was a real pirate or simply a political less to the Whigs is unknown. But we do know, that following his death, his image grew to what it is today. Today, he is known as one of the most famous pirates in history.