Today in History: Bonnie and Clyde Killed by Police (1934) 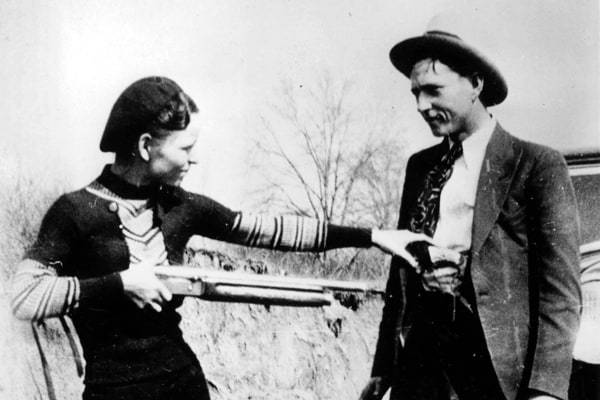 Today in History: Bonnie and Clyde Killed by Police (1934)

It is almost universal that during times of great economic upheaval, crime rates go up. Less legitimate employment, more expensive living conditions and so on, often force those who would otherwise lead normal lives into living lives of crime. It also opens the door for people predisposed to crime to take advantage of desperate people.

During the Great Depression, this was true. Other factors led into the increased crime rate as well, things like a decade of Prohibition, that led to gangsters and organized crime groups that peddled illegal alcohol.

The late 1920s and 1930s was full of dramatic and well-known criminals. Al Capone, John Dillinger, Pretty Boy Floyd, and of course Bonnie and Clyde are all very famous for their criminal ways. In fact, the public at the time became very enamored with many of the well-known criminals of this time period, many of whom were sensationalized in the media.

The public image of Bonnie and Clyde often falls into the category of ‘tragic love story’. Bonnie Parker is one of the few women from this time period that is associated with a true life of crime, though there are others.

Bonnie Parker and Clyde Barrow met in 1930 while Parker’s husband was in jail. Historians mostly agree that they were smitten with each other right from the beginning, and many suspect that Bonnie Parker started up her life of crime with Barrow because she was in love.

Barrow was sent to prison soon after their first meeting, but Parker waited for him and they soon started a spree of small-time robberies throughout the central United States. In 1932, Barrow was accused of his first murder (though in that instance he was innocent, though a member of his gang was guilty). Later that year, he and Raymond Hamilton and Ross Dryer (both associates in his gang) shot and killed a sheriff’s deputy. It was the first time, but not the last, that Clyde Barrow killed a lawman.

What followed was a spree of murder and robbery. Bonnie and Clyde would soon become a national sensation. In 1933, their escape from a hide out in Joplin, Missouri became nationwide news when two police officers were killed. It was the aftermath of this raid by police that netted some of the only images we have of Bonnie and Clyde.

There are several instances during 1932 to 1934 where Bonnie, Clyde, and their gang would kidnap people, rob them, then leave them far away from home. Historical reports suggest that they would leave their victims with enough money to return home.

Because of increasing notoriety (due to the images found in Joplin, more people knew what they looked like), Bonnie and Clyde’s life became much harder. They started having to camp out as being in public would lead to their capture. Writing from some of their gang suggest that both Parker and Barrow knew that their crime spree would end in their deaths.

This notoriety led to them being recognized in Red Crown Tourist Court (now part of Kansas City, Missouri) in July of 1933. It was during this escape from law enforcement, that two of the three remaining members of their gang were injured. Buck Barrow, Clyde’s brother, was mortally wounded, and Buck’s wife was nearly blinded. While trying to save Buck’s life, the police caught up with the gang once more. Buck Barrow as killed, and his wife was captured. Bonnie and Clyde and their last gang member W.D. Jones managed to escape.

For the next year, the trio would commit small time robberies. In 1934, Barrow would be instrumental in the Eastham Prison breakout, which led to federal law enforcement being brought in. It was this final action that led to the couple being hunted nationwide. Over the next few months, they (along with the men they broke out of prison), would kill several lawmen, and continue their crime spree.

On May 23, 1934 the law finally caught up with Bonnie and Clyde for the final time. They were gunned down on a rural road in Louisiana.

Bonnie Parker was, by all accounts, in love with Clyde Barrow. And while there is evidence that she was involved in some of their crimes, there is no evidence that she ever killed anyone (she did shoot at law officers during their escape from Joplin, Missouri). The two were national sensations for their illicit actions and what the public saw as a couple in love committing crimes and running from the law. Their lives would be immortalized in movies and TV shows long after their death.