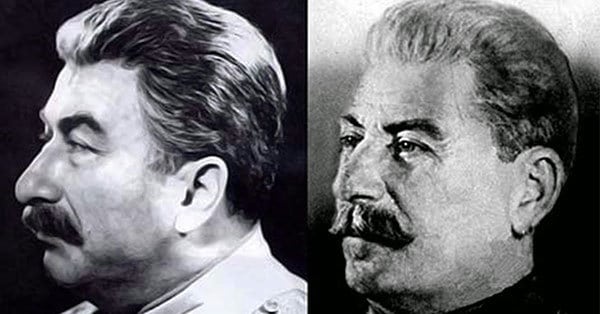 History is stranger than fiction. As the Second World War raged on, Joseph Stalin, the Premier of the Union of Soviet Socialists Republic (USSR), became fearful for his life. To alleviate this fear, the Soviet secret police, later called the KGB, recruited people to act as a political decoy for Stalin. It is suspected that Stalin used political decoys for much of his life. When Stalin died on March 5, 1953, it became a common truth that Stalin did indeed use body doubles. Some even suspected that Stalin had faked his own death and it was a political decoy in his coffin and tomb. A portion of the truth trickled out, finally, in 2008.

To state that Joseph Stalin was a powerful leader is an understatement. Stalin was born to ethnic Georgians and grew up speaking the Georgian language. The majority of Gori’s 20,000 residents were ethnically Georgians but there were also ethnic Armenians, Russians, and Jews in the small Georgian town. Stalin’s father was a cobbler, who failed to keep up with foot-fashion trends. As his business failed, Stalin and his parents moved from apartment room to apartment room and lived in poverty. As Stalin’s father turned to a state of drunkenness that resulted in repeated beatings, Stalin and his mother fled to the home of a family friend, Father Christopher Charkviani. Living in the Charkviani home allowed Stalin to attend the Gori Church School, where he excelled academically and displayed talent as a painter, poet, and dramatist.

Stalin became involved in the illegal fight toward revolution. He was arrested several times for organizing illegal workers’ rights marches and political rallies. At one point, he was sent to Siberia as part of his punishment. After the Revolution and civil wars, Stalin became an important figure in Vladimir Lenin’s socialist government. While the two men squabbled over the implementation of government, Stalin was handed a gift when Lenin suffered a series of strokes in 1922. Shortly thereafter, Stalin gained control of the Soviet Union.

During Joseph Stalin’s rise to power, he implemented controversial murderous plots against the citizens of the Soviet Union. Ministers and people who opposed him were executed after fake trials or they just disappeared. Stalin increased the role of the Soviet secret police as he became an absolute power in the 1930s. For a man that relied upon the covert operations of the secret police, it made sense to use political decoys as a way to protect himself from his growing list of enemies. While there may be many more, two of Stalin’s political decoys are known.

Political decoys are not new in human history. Leaders have used them long before the invention of the internet, fake news, and alternative facts. The use of a decoy could give an ailing leader the sense that he or she was fine. It has long been rumored that Winston Churchill used a voice impersonator, Norman Shelley, to record his breakfast chats during the Second World War. A former aid to Harry Kissenger has gone on record as stating that when Kissinger went on his secret China visit in 1971, he used an impersonator at least once.

The difficulty with proving that a leader used a political decoy is evidence. Any leader that used a body double would want to keep that information as close to the vest as possible. The sanctioned use of a body double goes far beyond a doppelganger or look-a-like. A stand-in for a president or powerful leader must undergo extensive training to ensure that their deception is 100% accurate. A political decoy must know all of the visual mannerisms of the person that they are standing in for; otherwise, chaos could ensue. Imagine if a political decoy used his right hand to sing a letter when the real leader was left-handed. There would be some serious ramifications for such a misstep.

In April 2008, Felix Dadaev came out to officially proclaim that he was one of at least four of Joseph Stalin’s political decoys. Gaining approval from the Vladimir Putin government, Dadaev wrote an autobiography about his days as Stalin’s body double. Dadaev was a young man when the Second World War broke out, yet he states that his friends thought he could pass for Stalin. An actor, illusionist and musician, Dadaev was to travel to Britain as a member of the State Singing and Dance Band of Ukraine. When war broke out, he was reassigned to a concert brigade as a dancer, juggler, and illusionist. As with all members of the military, he had to fight as well. In 1942, Dadaev was badly wounded during the Russian liberation of Grozny. His family was notified that Dadaev was dead. This is where his life as Stalin’s double begins.

In 1943, Dadaev was flown to a cottage near Moscow and instructed by the NKVD, later the KGB, that he forge a new identity. He was “flattered” and “proud to look like the leader.” Dadaev began his training to become Stalin’s body double. Despite being significantly younger than the leader, makeup artists made the 20-something young man look like the war-strained 60-year old leader. Dadaev watched countless movies and newsreels of Stalin in public giving speeches and walking. Under the strict direction of Lavrenty Beria, Stalin’s chief of secret police, Dadaev mastered Stalin’s movements and intonation.

In 1943, Dadaev was flown to a cottage near Moscow and instructed by the NKVD, later the KGB, that he forge a new identity. He was “flattered” and “proud to look like the leader.” Dadaev began his training to become Stalin’s body double. Despite being significantly younger than the leader, makeup artists made the 20-something young man look like the war-strained 60-year old leader. Dadaev watched countless movies and newsreels of Stalin in public giving speeches and walking. Under the strict direction of Lavrenty Beria, Stalin’s chief of secret police, Dadaev mastered Stalin’s movements and intonation.

When Dadaev’s training was complete, he stood in for Stalin at the Kremlin. This was a plan made by Stalin’s ministers and committee leaders. If Dadaev could convince those men that he was Stalin, he would officially become a political decoy. The months of training had paid off. In February 1945, Dadaev was placed on a plane and flown to Yalta to discuss with President Franklin D. Roosevelt and Prime Minister Winston Churchill the postwar reorganization of Europe. Dadaev’s plane was to act as a decoy that permitted Joseph Stalin to land in Yalta unnoticed. Soviet intelligence was not accurate. There were two assassination attempts against Stalin in Yalta, through no fault of Dadaev, who had been sent back to Moscow.

Over the course of several years, Dadaev’s life was all about standing in for Stalin. He learned how to apply the makeup on his own since a makeup artist could not always travel with him. Dadaev sat in cars in numerous parades acting as the Premier. He flew in planes that diverted attention from Stalin’s plane, allowing Stalin to arrive in cities unnoticed. If at any point Dadaev failed to convince those around him and the public that he was Stalin, the secret police would have executed him.

Dadaev was forced to sign a non-disclosure contract that prohibited him from discussing his role as Stalin’s political decoy for decades after Stalin’s death in 1953. He was never able to notifiy his family that he was alive or what his new role was in the Soviet government. Upon Stalin’s death there was no longer a need for a body double and Dadaev created yet another identity and life for himself. At the age of 88, he released the approved autobiography about his role as Stalin’s body double.

Dadaev was not the only body double for Stalin. Rumors had circulated that there was another body double for Stalin simply known as Rashid. It is unclear if Rashid was trained by the Soviet secret police or recruited by Joseph Stalin. Regardless, Rashid learned how to mimic Stalin under the tutelage of Alexei Dikiy who played Stalin in the numerous propaganda films released by the Soviet government.

Rashid stood in for Stalin on numerous occasions. The KGB never acknowledged Rashid as one of Stalin’s body doubles. The rumor that Rashid existed is consistent with Dadaev’s approved account that Stalin used more than one body double. Rashid had claimed that while Stalin was lying in his home dying, a body double was in the home acting as if Stalin was healthy. This body double was used when Stalin needed to make appearances to meet government officials and others in the months and weeks before his death. The man simply known as Rashid existed. He died in 1991 at the age of 93.

Felix Dadaev saw Joseph Stalin only once. The encounter was brief and happened in the years before Stalin’s death in 1953. Dadaev stated that Stalin “smiled and gave me an approving nod and that was it.” For a man that proclaimed to be “honored” to stand in as a political decoy for the leader of the Soviet Union, that simple nod of approval was enough recognition for a job well done. Clearly, Dadaev was a talented stand-in for Stalin as his story has now been made public with Russian approval. Having just a little evidence that Joseph Stalin used body doubles provides some proof on how governments would protect their leaders during times of adversity.