Today In History: Geronimo, The Apache Warrior, Surrenders To the U.S. Army (1886) 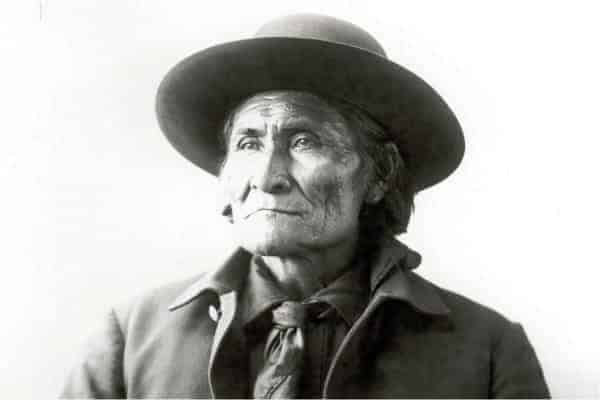 Today In History: Geronimo, The Apache Warrior, Surrenders To the U.S. Army (1886)

From 1850 – 1868 the Apache warrior Geronimo was part of a united front that carried out a number of raids in a show of resistance to the U.S. and Mexican military in parts of the American Southwest and north Mexico. Historically, the raids were not new. They predated Geronimo and at that time were carried out so frequently that they started to become a normative expression of the Apache way of life.

The Apache – United States conflict did not begin until 1848, following the of the American – Mexican war. It was directly related to the American expansion (and settlement of) Apache tribal lands. The Apache were a collective group of tribes whose cultural and regional ties bound them together; they originally inhabited the southwestern United States.

While the Apache were stealing livestock, they were also fierce warriors. Early violent raids began in the 17th century along the Mexican and Arizona border. Mexico was eager to put an end to the raids and in 1835, openly encouraged Mexican citizens to kill the Apache as a means of justice. But, the raids escalated and by 1837 were so severe, frequent and brutal that the entire area was an open pit of vulnerability. Over five thousand Mexicans were killed between 1820 and 1835.

Geronimo came of age during the years the raids were on the rise and perceived the continuation of them as an Apache way of life that grew from revenge warfare. He eventually became a natural leader of the Apache warriors but before joining them he was a family man from a young age. The turning point that sealed his future was a Mexican raid on a camp that left his mother, wife, and three children dead.

The Apache – Mexican revenge raids continued, now with Geronimo among the mix. The Apache – United States conflict that began taking shape was an extension of the ongoing warring. Adding US troop to the mix began to wear the Apache down, Geronimo and other warriors were forced to flee their reservations. American troops were able to trail the tribes throughout the summer and autumn seasons while those who were left on the reservation became restless which caused a series of escapes, led by Geronimo who escorted the Apache bands into rugged areas to a hideout.

The U.S. Army were able to recruit some Apache to scout Geronimo and his followers to the areas where they were hiding. The Indian warriors were uneasy to discover their own people were acting against them in favor of the U.S. and Mexican militaries. This lowered the moral of the warrior bands who finally agreed to negotiate, which took three days during which, Geronimo was warned by a U.S. soldier the plan was that he and his followers would be killed. This prompted Geronimo and his men to sneak away. Again, on the run, the U.S. Army relentlessly chased after Geronimo and his band. The Army gave them no room for sleep or staying long in any one place. The intense pursuit eventually wore the Apache down until they agreed to surrender, which they did on this day in 1886.

Geronimo soon escaped and remained on the run until his final capture in September 1886.