Today In History: The Mexican Army Massacres Hundreds During the Texas Revolution (1836) 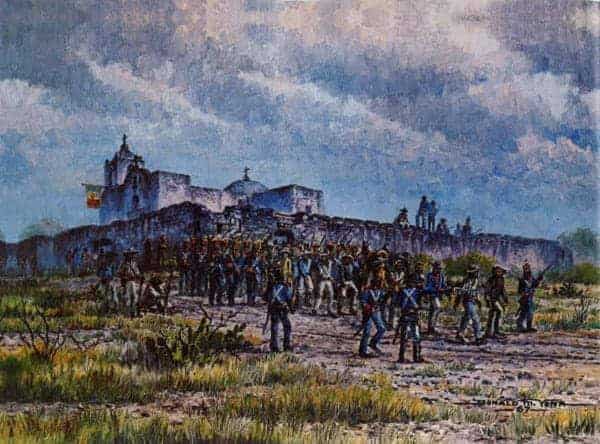 Today In History: The Mexican Army Massacres Hundreds During the Texas Revolution (1836)

On this day in 1836, during the Texas Revolution, the Goliad Massacre took place. Over 300 war prisoners captured while fighting for the army of the Republic of Texas were slaughtered by the Mexican Army in the town of Goliad, Texas.

In the spring of 1836, the Mexican and Texan armies had been engaged in numerous battles during which the Mexican army began amassing a surplus of captured Texan rebels.

The Mexican forces continued dominating the Texan rebels. The Texan army put their predicament to a vote. Given their circumstances, they concluded they stood no real chance of defeating the Mexican army. Believing if they surrendered to the Mexican army they would then be released to the United States, they gave themselves up willingly and were taken to the fort at Goliad.

The vast number of Mexican forces continue overwhelming the Texas army and many more troops were taken into captivity over the following week, all of whom eventually ended up in Goliad. Popular belief that the prisoners would be released ran into conflict with a decree passed by the Mexican Congress that unequivocally stated: armed foreigners captured during combat would be executed.

Jose de Urrea, the Mexican General who oversaw the prisoners, was deeply conflicted by his duty and even wrote the President of Mexico, Antonio Lopez de Santa Anna, to inquire about an alternative to execution. Santa Anna replied that Urrea had no choice but to comply with the law. To assure the order was carried out, Santa Anna sent a second letter to the commanding officer posted at Goliad. On the same day, the officer posted at Goliad received a second letter. This one was from General Urrea, who ordered the prisoners not be executed.

On March 26, the commanding officer marched the Texas rebels out of Fort Defiance. The prisoners were arranged in three columns and executed. Those who hung on to their lives longest were clubbed and then knifed to death. Their bodies were burned and left unburied.