Today In History: Paris Is Sacked By Viking Raiders (845) 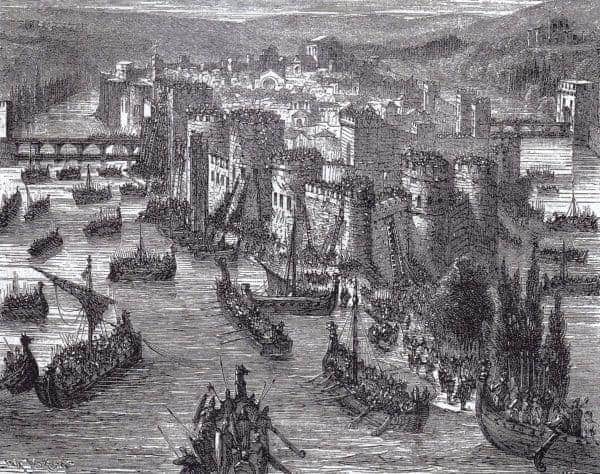 Today In History: Paris Is Sacked By Viking Raiders (845)

On this day in 845, Paris was sacked after a number of Viking attacks led by Norse chieftain, Ragnar Lodbrok. The Frankish Empire had been enduring attacks from the Vikings for over a decade. By the time they were able to seize Paris, Charlemagne had died. For years the Vikings had been unable to reach Paris because of a well-designed defense system that Charlemagne created. It stretched out along the empire’s northern coastline and worked to repel against a Viking strike near the mouth of the river Seine.

In 841, Ragnar had lost favor with the King and lost lands he had acquired over the years as a reward for his contributions to Viking successes. He led his forces to Rouen, they were able to travel up the Seine and defeat a division of the Frankish army. The Viking forces wasted no time, entering Paris the following day they raided and pillaged the city.

Disease was a factor during the wars. The same was true in battles that took place during the Medieval era. During the siege of Paris, exposure to the Plague caused an outbreak that killed a number of Ragnar’s men. Eventually, the Vikings fasted and the spread of the disease subsided. After killing many of its inhabitants, setting buildings on fire and taking prisoners, the Vikings demanded the Franks pay a ransom in exchange for their revolt. Charles agreed to the terms. Ragnar returned flashing gold and silver treasures procured while in Paris, but he did not seem of sound mind. He wept and made religious claims about the time spent in Paris.

After returning home, a number of men who served with Ragnar during the siege of Paris died. The combination of factors worried the Viking King who requested those who survived the siege be executed and pardons extended to all Christians being held prisoner. The siege of Paris was not wholly regarded as a regretful event. The Vikings tried to sack the city once more in the 860s.