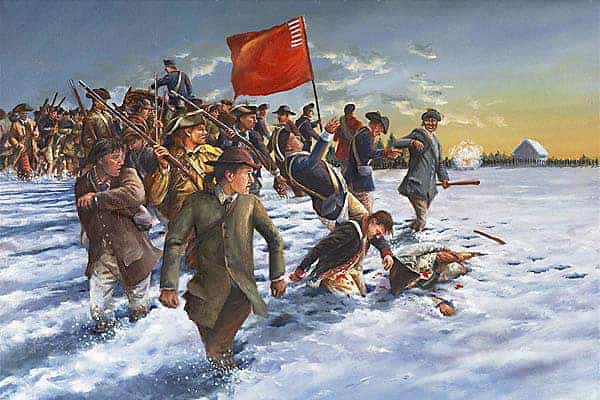 Today in History, Shay’s Rebellion began February 24, 1786. The armed uprising was led by a Revolutionary War veteran, Daniel Shays. He was followed by four thousand angry Shaysites, who together in 1787 marched to the city of Springfield, Massachusetts. Upon arriving, they tried to take control of the city’s armory and overthrow the government. Their motivation to confront the lawmakers was linked to a variety of economic and civil rights injustices.

Even though the rebellion failed, it made a lasting impression on lawmakers; thematically, it became an impetus of debate at the U.S. Constitutional Convention. It also drew attention to the prospect that the nation might have to –finally– reform the Articles of Confederation. The rebellion also caught the attention of George Washington who had been enjoying a private life as a retired citizen since the end of the Revolutionary War. Realizing, his work was not yet done, he emerged from retirement and ended up serving two terms as the first president of the United States.

When Thomas Jefferson heard news about the rebellion, he expressed a need to not overreact. In a letter to James Madison, Jefferson underscored that moments of civil unrest now and again are a good thing. From his point of view, the rebellion was nothing more than the normal byproduct of a healthy democracy.

As debate over the rebellion grew, the government finally began to seriously address the weakness of the federal government as constituted under the Articles of Confederation. Federalists agreed vehemently that a stronger central government was necessary. After Shays Rebellion, even a few Anti-Federalists began shifting their opinion. Convention after convention, it was acknowledged this could not be decided without input from each state. The Constitutional Convention was scheduled and in 1787 all the states were invited to attend and settle the matter. Together in Philadelphia, representatives discussed myriad issues, including how to manage domestic riots and a state’s authority concerning extradition from one state to another. Some issues considered very likely would not have been on the table that day had Shay’s Rebellion not drawn attention to the intricacy and necessity of such laws.