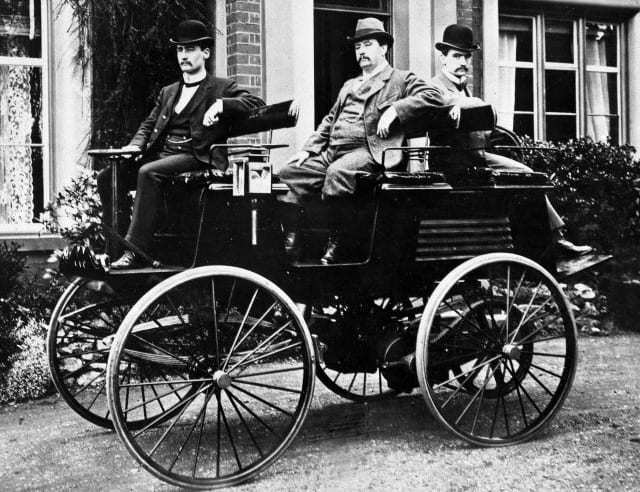 Thomas Parker was nothing short of a genius inventor who revolutionized several aspects of life in England. He was even described as “the Edison of Europe” because of the things he was able to accomplish. But Thomas Parker was not always recognized as being a brilliant engineer, and he came from rather humble beginnings.

Thomas Parker was born on December 22, 1843 in Coalbrookdale, Shropshire. His father was moulder at the Coalbrookdale Ironworks, and as a young child Thomas worked in the ironworks while attending school. He always had a flair for creating things, and in 1857 he made a small steam engine, and in 1859 he made a violin. His interests were always varied and he would find a way to create things that fit his changing interests. In 1862 he became a moulder like his father. It was a job that his family had performed for generations. His direction in life changed when he was sent to the 1862 International Exhibition in London as a representative of the Coalbrookdale Ironworks. There saw some of the great technology of the time including the wet battery and the electric telegraph, which would inspire his later endeavors.

He moved to Birmingham that same year in order to increase his experience as a moulder. He got married to Jane Gibbons, the daughter of an engine-driver. Together they moved to Manchester where Parker was able to attend chemistry lectures by prominent scientists including Henry Endfield Roscoe. He returned to Coalbrookdale in 1867, working as foreman for a short time before being granted the position of chemist in the electroplating department. His new position inspired him and gave him the opportunity to create some of his first major inventions.

In 1867 Parker worked with a machinist at Coalbrookdale in order to create a new and improved steam pump. They received a patent for “Parker and Weston’s Patent Pump” and it was awarded a medal at the International Inventions Exhibition of 1885. The steam pump became solely manufactured by the Coalbrookdale Company. Parker continued working in the electroplating department and there he saw a way to improve the process. He replaced the battery cells with a large dynamo that he designed and built himself. This is believed to be the first time that a dynamo was ever used for this purpose.

His job at Coalbrookdale never stopped giving him opportunities to invent new creations. In 1880 the Kyrle Society increased awareness about the negative effects of coal smoke in cities. So Parker invented the “Kyrle Grate,” which was designed to allow anthracite coal to be burned inside of it. His grate won a silver medal at the Smoke Abatement Exhibition in 1881.

After the grate, he invented a gas engine, and then he moved on to the lead-acid battery which was invented by Gaston Planté. Parker believed that the battery could be improved, and in 1882 both Parker and Gaston Planté filed for patents for the same improvement to the lead-acid battery. Both patents were granted. Parker later decided to buy out Planté’s interest in the process.

Parker never slowed down with this inventions and improvements. He made improvements to alternators and he was involved with working on the electric tramway at Portrush in Northern Ireland. It became the first electric tramway in the world to powered by hydroelectricity. In 1882, Parker, working with Paul Bedford Elwell, took out patents for improvements to electric lighting and dynamos. That same year he left Coalbrookedale to create a company with Elwell to manufacture electrical equipment.

What he created next was years before its time, and it stunned the world.

Thomas Parker was not the first person to create a vehicle that could run on electricity, several others had attempted it throughout the 1800s. But Parker did manage to do something that no one else had done before him and something that others would attempt to do for decades after him.

The Elwell-Parker company started designing, building, and installing dynamos and electric lighting. In 1883 they were the first ones to install an electrical installation underground when they created dynamos and electric lighting for Trafalgar Collieries in the Forest of Dean. They were then approached to design and construct the electrical plant for the Blackpool Tramway, the first electric tramway in England.

Strangely enough, it was Thomas Parker’s electric vehicle that got very little attention. It was the first electric vehicle that had the potential to be mass-produced and truly revolutionize how people traveled. Parker was very interested in looking at eco-friendly options for transportation after realizing just how bad gas and coal were for the environment. It was to that end that he worked to power more things by electricity such as trams.

Parker developed several models of electric cars, one of which he drove rather regularly despite the Light Locomotive Act. The Act stated that three men would have be in the vehicle, two to drive and one to walk in front of the vehicle with a red flag. The car was only legally allowed to go 4 miles per hour on country roads and 2 miles per hour on town roads. He was known as Wolverhampton’s (the city where Elwell-Parker was based) first motorist. He made a habit of commuting to work in his vehicles, one of which gave him 18 months of trouble-free service.

Parker gave talks to the automobile club and during one of them he complained that the hilly town of Wolverhamption did not have a single yard of level ground. He lamented that the hills and gradients prevented his progress in improving the electric car because of insufficient batteries. Eventually his cars started to gain attention and he even sent one to Paris, but the ship floundered in the channel. The car was salvaged and sent back to him.

Amazingly, being electric was not the only innovative feature of Parker’s cars. Some of them had hydraulic brakes on all four of the wheels, and four-wheel steering. These were improvements that were unheard of even once cars started to dominate the roads. Parker continued to invent and revolutionize life in England and Europe for the rest of his life, and each generation of his descendants have continued in the family tradition of inventing.