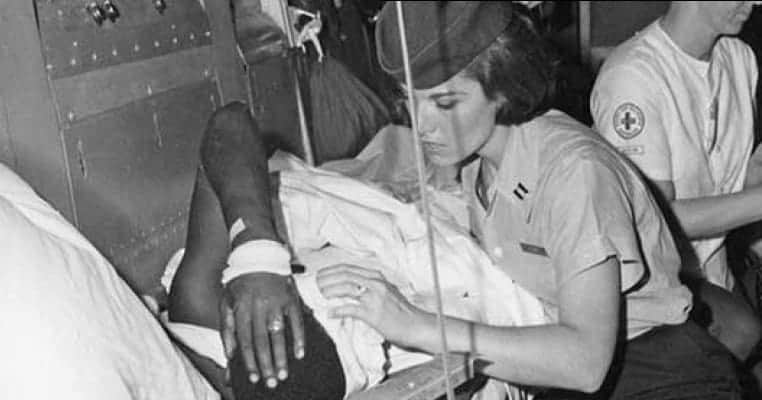 While the iconic images of US soldiers in the Vietnam War all evoke young men posing in alien-looking jungles or with Huey helicopters, the reality is that many women were involved in the conflict as well. Little official data exists to confirm the number of women who served or volunteered, but estimates put it around 11,000. The vast majority were volunteers, not service members, serving in nursing roles with various branches of the US Armed Forces. However, there were also enlisted service members in all branches and at various levels including physicians, air traffic controllers, intelligence officers, and other service positions.

American women also served in Vietnam through charitable organizations like the United Service Organization (USO), famous for its entertainment programs, the Red Cross, the Catholic Relief Services, and other humanitarian organizations. Female journalists and foreign correspondents were also present and even suffered casualties. South Vietnamese women joined the war effort through a Women’s Corps that focused on supporting military families through medical care and child care. The North Vietnamese paid less heed to gender norms and had women present at many levels throughout their war effort including serving in combat and sabotage units alongside men.

The vast majority of women who serviced in the US Armed Forces during the Vietnam conflict were nurses. All of the nurses who served did so as volunteers, dispatching with the Army Nurse Corps. Their ranks ranged from recent college graduates to career service members in their 40s. The first Army Nurse Corps members arrived in Vietnam in 1956, with a mission of teaching the South Vietnamese nursing skills. More traveled to Vietnam as the conflict increased, with over 5,000 eventually serving between 1962 and 1973. The last Army Nurse Corps member left Vietnam in March 1973, just two years before the fall of Saigon.

The army nurses did suffer casualties throughout the duration of their volunteer service. Five female army nurses are documented as casualties, with the first being Lieutenant Colonel Annie Ruth Graham, who died of a stroke in 1968 at the age of 52. Prior to her service in Vietnam, she had served as an army nurse in both World War II and the Korean conflict. A combat death occurred in 1969 when First Lieutenant Sharon Anne Lane died of shrapnel wounds sustained during a bomb attack on the hospital where she served. She was posthumously awarded a Vietnamese Gallantry Cross with Palm and a US Bronze Star for Heroism.

The US Army resisted the idea of sending women, other than nurses, to the Vietnam conflict. It wasn’t until 1964, when General William Westmoreland requested the presence of a Women’s Army Corps (WAC) officer, that non-nurse service members had a presence in Vietnam. The WAC, which was founded during World War II, had 20 officers and 130 enlisted women in Vietnam at its peak in 1970. Their mission was to train South Vietnamese women to create their own women’s army division. No WAC members were killed in the conflict.

Women and the US Military

The US Navy, Air Force, and Marines

Much like the US Army, the US Navy also had a Nurse Corps. The Navy Nurse Corps had a presence in the conflict starting in 1963. On Christmas Eve 1964, the Viet Cong bombed an officer’s accommodation wounding many, including five Navy nurses who eventually received Purple Hearts.

They became the first female armed service members to receive Purple Hearts through service in the Vietnam conflict. Aside from nurses, nine female Navy officers served in the battle. Lieutenant Elizabeth G. Wylie was a staff member of the Commander of Naval Forces and worked for the Command Information Center in Saigon, starting in 1967. Commander Elizabeth Barrett became the first female naval officer to hold a command in a combat zone in 1972.

The US Air Force also had a nurse corps in addition to a Women’s Air Force (WAF.) One of the eight military women killed during the conflict, Captain Mary Therese Klinker, was a flight nurse killed in a plane crash near Saigon during the city’s fall. Her plane had been part of Operation Babylift, which was evacuating South Vietnamese orphans to the US for adoption. One hundred and thirty-eight people were killed in the crash, including many children and women working with humanitarian agencies. Klinker was awarded the Airman’s Medal for Heroism and Meritorious Service.

The US Marines had a minimal female presence, as their stringent gender requirements had only approved 60 women to serve abroad. The vast majority of those women served in Hawaii. Only 28 enlisted female Marines and eight officers served in the conflict between 1967 and 1973. The Marine Corps continues to have the lowest percentage of female service members out of all branches, with only 8.3% of enlisted members in 2017.

In addition to the numerous nurses, enlisted women, and officers who served in the conflict, many civilian women traveled to Vietnam to offer aid. Unfortunately, these numbers were not officially tracked by any organization. The most significant organizational presences were the USO, the American Red Cross, the Peace Corps, and numerous faith-based organizations. These women would have volunteered their time in various capacities from nursing, missionary work, education, childcare, and more. It can’t be forgotten that a side effect of war is many humanitarian catastrophes.

American women also traveled to Vietnam as journalists and foreign correspondents. Georgette “Dickey” Chappelle, a writer for the National Observer, was killed by a mine while accompanying marines on patrol in 1965. The Vietnam Women’s Memorial Foundation states that 59 civilian women were killed during the duration of the conflict. One controversial civilian appearance came from the actress Jane Fonda. A prominent anti-war activist at the time, Fonda visited North Vietnam in 1972 to draw attention to claims of US forces bombing North Vietnamese dikes, which the US continues to deny to this day. During the visit, Fonda was photographed sitting on a North Vietnamese anti-aircraft gun. The photo and associated widespread criticism earned her the nickname “Hanoi Jane” which persists to this day.

Women and the Vietnamese War Effort

While not much is known about their personal stories, we do know that the Army of the Republican of Vietnam created a Women’s Armed Forces Corps to help women with family stationed in combat. Throughout the conflict, familial obligations were the leading cause of soldiers deserting the army. The Women’s Corps, which at its height had over 2,700 members, provided vital services in administrative, medical, social work, and intelligence – freeing up male service members to focus on combat with the knowledge their families were being cared for. To serve in the Women’s Corps, women needed five years of formal schooling. Eleven years were required to serve as an officer. Recruits had to be unmarried and stay so during their first two years of their three-year term of service.

The South Vietnamese war efforts did little to break out of the era’s established gender roles. While the Women’s Corps’ work was vital, it was entirely focused on child care, medical care and administrative duties – work that was already considered acceptable for women at the time. Women could train in self-defense and weapon skills with local People’s Self Defense Forces, but such training did not make a woman eligible to join a combat unit. Women were technically allowed to serve in combat roles, but the commissioner of the Saigon Self Defense unit went on record to say that women were best suited to support positions.

The Vietnamese People’s Army did not hold itself to any of the traditional gender roles of the Army of the Republic of Vietnam. President Ho Chi Minh, the leader of communist North Vietnam, expected women to mobilize and fight for their country right alongside the men. Women enlisted in both the People’s Army within North Vietnam and the Viet Cong, active as a sabotage unit in South Vietnam. Many of the enlisted women served as nurses, like in the US and South Vietnamese armed forces, but there were women who served in various combat roles as well.

The North Vietnamese forces do not appear to have had separate women’s forces, unlike both the US and South Vietnam. At least two women, Le Thi Hong Gam and Ngo Thi Loan, joined Brigade 559 as a communications worker and nurse, respectively. Brigade 559 was a transportation unit of the People’s Army that focused on transporting materials and information from North Vietnam to Viet Cong units active within South Vietnam. It was not designated as a women’s unit.

The North Vietnamese also undertook an effort to acknowledge the human cost of the war on its people. An award was created with the honorary title of Heroic Mothers of Vietnam. It was bestowed to over 50,000 North Vietnamese women in recognition of the loss of their sons. Some women fought in North Vietnam’s conflicts themselves in addition to losing sons like Nguyen Thi Nghi, who was a resistance worker against the French Occupation of North Vietnam and lost two sons in the Vietnam conflict.

“The Vietnamese women who fought for their country” BBC Staff, BBC. December 2016.