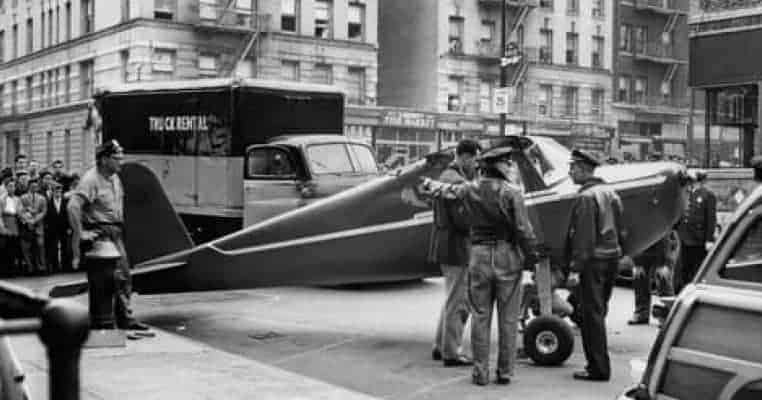 Flying has captured the human imagination for centuries. Dreaming about flying above the trees led to an entirely new industry at the onset of the 20th century. Men and women designed planes that would carry people and cargo to far off places. New industries evolved to accommodate travelers in a quickly changing world to make flying as safe and free from worry and stress as possible.

Whenever there is an issue regarding a flight of any kind, it grabs our attention. A plane crash, mechanical issues, airport power outages, storms, even fights among passengers make headlines. Yet, what if someone stole a small aircraft, took off without control tower clearance, then landed it on a busy Manhattan street, got out and went into a bar to have a drink? In today’s era of fear, the pilot would be arrested as a terrorist. Imagine an aviator pulling this stunt in 1956, during the height of the Cold War and drunk. This is the story of one such aviator.

Each year, the human love for flying has millions of people cramming onto commercial flights and flying near and far. Shockingly, there are very few commercial flight mishaps. The love for being above the canopy and higher than the birds drove Wilbur and Orville Wright on a quest to fly their “heavier-than-air aircraft” on December 17, 1903, off of the dunes near Kill Devil Hills, North Carolina. The bicycle repairmen sparked an intense and world-wide quest to make flying as natural as taking the train.

Pilots became immediate celebrities in the early 20th century. The German Air Force fighter pilot, Manfred von Richthofen, known as the “Red Baron,” captured the imagination of many during the First World War. Images of warplanes fighting in Europe were shown in movie house news reels. Charles Lindbergh flew a successful solo fight across the Atlantic from America to France in 1927. Everywhere he went he was greeted as a hero and cities threw him ticker-tape parades and gave him keys to their cities.

Just as the world was heading toward economic collapse, commercial airlines were forming. Two large ones were Trans World Airlines, which started flights in 1926, and Pan American World Airways that began flying in 1927. Technological advancements continued even as the world suffered from economic perils. When the Second World War began, pilots and mechanics became an essential part of both the Axis and Allied war efforts. Wars provided men and women with opportunities to learn all about flying.

Thomas Fitzpatrick was one such boy. He grew up in Washington Heights, a neighborhood at the northern tip of Manhattan, and was born on April 24, 1930. Tommy lied about his age and enlisted into the Marine Corps and fought in the Pacific during the Second World War. When the war ended he was honorably discharged and returned home. Then, in 1949, he joined the US Army and fought in the Korean War. Corporal Fitzpatrick received the Silver Star and Purple Heart after he was “seriously wounded” and attempted to rescue fellow soldiers “despite severe pain and loss of blood.” Again he was honorably discharged and returned home from war.

Tommy Fitz, as he was called, became a steamfitter in his civilian life. The work required long hours working in the hot and cramped underbelly of New York buildings. On the side he was a part-time airplane mechanic at the Tetterboro School of Aeronautics in New Jersey. He was also learning how to fly and logging in hours for his pilot’s license. By the age of 26, Tommy Fitz was a veteran of two wars, was a union steamfitter, and was involved in the fast-growing aviation industry.

In typical fashion, Tommy and his fellow blue collar workers in the construction trades ended their days by visiting a local tavern. The handwork and long hours involved with being steamfitter required some time to unwind before heading home to engage in domestic duties. Joe’s Bar on 191st Street was a frequent hangout for Tommy Fitz and his coworkers. One night a debate raged among the bar’s patrons. Was it possible to fly from New Jersey to Washington Heights in 15 minutes? Full of the drink, Tommy accepted the challenge and left the bar. He headed across the Hudson River to Teeterboro Airport.

On Saturday night, September 29, 1956, Thomas Fitzpatrick arrived at Teeterboro, selected a small red and white Cessna 140, and began his flight. He flew the plane over Washington Heights and landed it near Joe’s Bar on St. Nicholas Avenue near 191st street. The drunk pilot was able to maneuver the plane’s 32 foot wing span and land it safely on the roadway lined on either side by buildings. He then taxied the plane up to Joe’s Bar, shut off the engine, and went inside for a celebratory beer just before the 3 am last call.

A plane landing on a Manhattan street at 3 am garnered the attention of the local police. The police arrived at Joe’s Bar where Fitz told them that he had suffered “unexpected engine trouble” and was forced to land. He admitted to borrowing the plane because, while drinking, he suddenly had “an urge to fly.” After the police aviation department examined the plane, they determined that there was no engine trouble and Tommy Fitz was simply flying drunk. He was arrested and the plane was dismantled and moved to a nearby police station.

A judge set Tommy’s bail at $5,000 and charged him with grand larceny, which was a felony, as well as violating the city’s municipal code that forbid landing airplanes on any streets in New York City. The judge stated that “many terrible things could have happened” and he did not want Tommy Fitz to perform such a stunt again. Eventually, the grand larceny charge was dropped when the owner of the plane refused to sign a complaint.

Some in the police department were in awe of Tommy’s drunken accomplishment. One sergeant in the Police Aviation Bureau proclaimed that flying a plane drunk and managing to land it safely between New York buildings was a “100,000 to one shot” and a “feat of aeronautics.” Eventually, Tommy was found guilty and fined $100. His pilot’s license was suspended for six months. After his late-night flight, Tommy Fitz claimed he had no desire to fly again and never renewed his license.

Thomas Fitzpatrick got married in June 1958. He and his bride, Helen, settled in New Jersey while Tommy continued to work as a steamfitter. After visiting his old stomping grounds on October 4, 1958, Tommy Fitz went into a bar for a drink. As the drinks flowed the stories grew. When one bar patron told another that Tommy Fitz had landed an airplane on St. Nicholas Avenue and 181st Street they simply did not believe it. Tommy Fitz got up from his barstool, left the bar, drove to Teterboro Airport, and selected a plane. At 12:20 am, the control tower at Teterboro Airport watched Fitz take off in a Cessna 120 without proper clearance, radio contact, or navigation lights.

Just after 12:35 am, a bus driver at Amsterdam Avenue and 191st Street saw a plane in the rear mirrors coming in for a landing. According to the bus driver, the plane landed next to the bus, bouncing 20 feet up upon contact with the ground and then bounced again and “taxied down to 187th Street.” The bus driver, Harvey Roffe, fled from his bus and ran down to 187th street to see the plane. By the time that he arrived, the pilot was gone. Another witness to the plane’s landing told police that he saw a man who was “tall, blond, and husky wearing a gray suit” fleeing from the plane.

Once again the borrowed plane was in fine working order. It even had 3/4 full tank of fuel! As the police began to draw parallels to the plane landing event from two years earlier, Tommy Fitzpatrick became a person of interest. Upon his first round of questioning, he denied everything. When a witness identified Fitzpatrick as the man who fled the plane and the police told him that his finger prints were all over the plane, he admitted to borrowing the plane and landing it on Amsterdam Avenue.

Upon his release from prison, Tommy Fitz returned to working as a union steamfitter. He and his wife, Helen, raised their three sons in Washington Township in Bergen County, New Jersey. Tommy Fitz was an active member of his community belonging to a VFW Post, the Men’s Club at his church, along with other civic organizations. After a battle with cancer, Thomas Fitzpatrick died on September 14, 2009, just past the 53rd anniversary of his first plane landing on a New York City street. A drink consisting of Kahlua, vodka, Chambord, blackberries, egg white, and simple syrup was named in Tommy Fitz’s honor and known as the “Late Night Flight.”

Long Ago, a Pilot Landed on an Uptown Street. That’s Where the Bar Was. COREY KILGANNON. June 3, 2013.

A Drunk New Yorker Stole an Aircraft Twice And Landed It In The Middle Of Manhattan, All On A Bet. Nikola Budanovic. Dec 22, 2017