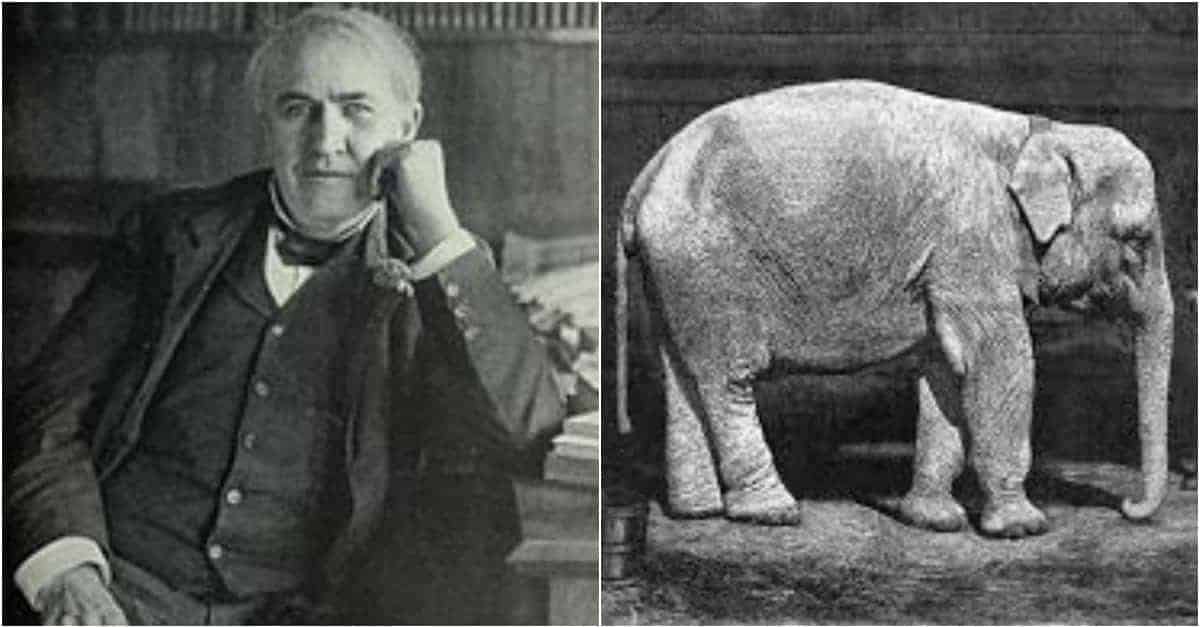 Topsy was an Asian elephant who was secretly smuggled into the United States. She was quickly purchased by circus master Adam Forepaugh, who falsely advertised Topsy as “the first elephant born on American soil.” Topsy quickly grew to be ten feet tall and weigh over four tons. And in 1902, Topsy the Elephant made national news when she killed a spectator at Forepaugh’s circus. The incident wasn’t entirely Topsy’s fault; the patron in question had grown angry that Topsy wouldn’t drink the whiskey he offered her and then burnt the tip of her trunk with a cigar, prompting Topsy to crush him to death.

But the story of a killer circus elephant was too valuable not to make use of, and Forepaugh soon began parading Topsy across the country and charging admission to see the “killer elephant.” But after a number of other near-death incidents caused by Topsy’s drunk handlers, Topsy’s owner realized he couldn’t keep her. Instead, he decided to cash in on the Elephant’s notoriety one last time by arranging a public execution. And on January 4, 1903, Topsy was to be executed by due to be strangled with a crane at Luna Park in New York. The cost of admission was 25 cents.

When Edison heard of Topsy’s story, he quickly dispatched some of his employees to capture the incident in the new medium of film. But contrary to the popular story, this seems to have been the limit of Edison’s involvement in the affair. To begin with, the electrocution doesn’t seem to have been Edison’s idea. It was actually part of a broader strategy Topsy’s executioners came up with to handle the problem of killing an elephant. Topsy was poisoned with cyanide-laced carrots, hung from a crane, and electrocuted with 6,600 volts of electricity. And while it seems the electricity was probably what killed her, it was never meant to be a showcase of the dangers of AC.

In addition, Edison was never actually present at Luna Park, which shows that he probably wasn’t that interested in the demonstration. Finally, and most tellingly, by the time Topsy was electrocuted, the “War of the Currents” had been over for almost ten years. Westinghouse had already been awarded the contract to build electrical generators at Niagra Falls, which is largely regarded as the point at which AC current won the battle over DC. So it would have made little sense for Edison to have arranged for Topsy’s execution as part of a fight that he had already lost.

Ultimately, the idea of Edison electrocuting Topsy to prove a point paints a picture as the inventor as unethical and unscrupulous. It falls into the popular pattern of reimagining historical figures as less heroic than they are usually presented. And while Thomas Edison’s brilliance has no doubt been exaggerated in history, he doesn’t seem to be on the hook for Topsy’s death. So while there are a lot of reasons to dislike Thomas Edison, killing an elephant isn’t one of them. And the story shows why you need to take every historical anecdote, heroic or otherwise, with a grain of salt.

The Real History Behind The Current War – Time Magazine

Battle Of The Currents- AC vs DC

Edison Fries an Elephant to Prove His Point – Wired

Topsy the Elephant Was a Victim of Her Captors, Not Thomas Edison – Smithsonian Magazine