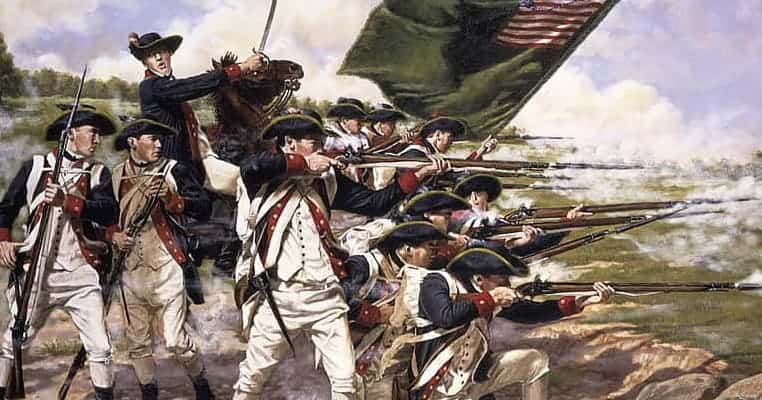 After Washington sent General Nathaniel Greene to command the southern contingent of the Continental Army, Greene in turn split his forces, sending a wing under Daniel Morgan to deal with the raiding British under Banastre Tarleton. Tarleton’s wing was crushed by the American force of Continentals and militia at the Battle of Cowpens in early 1781. The southern campaign became one of speed, with the British under Earl Cornwallis attempting to engage one or other of the wings of the American army before they could reunite. Failing in that after being checked by Greene at Guildford Court House, the campaign became a race to Virginia, from where the American units were supplied.

Both before and after the Battle of Guildford Courthouse the campaign was one of forced marches, battle, withdrawal, and another forced march to a defensible position. “We fight, get beat, rise, and fight again”, Greene wrote to Washington. Washington sent additional troops who faced the same daily conditions as Greene, forced marches in the blazing heat of the Carolinas in summer, cold, damp nights and days in the winter, the enduring problems with lack of food. The terrain was swamps, or thick woods with entangled underbrush, and poor roads, made worse by clouds of mosquitos and other pestilence biting exposed flesh. The British regulars endured the same conditions, with their morale steadily declining as they approached Virginia.

Von Steuben’s Regulations for the Order and Discipline of the Troops of the United States, which described in detail how the men of the Continental Army should conduct themselves on the march and in battle, also contained detailed descriptions of how the army should establish and maintain encampments. Von Steuben ensured that the soldiers in camp, under the supervision of their officers and non-commissioned officers, took steps necessary to the preservation of health and hygiene. He directed that in clear weather tents be struck daily, with the bedding within well aired. He forbade the consumption of meals inside of tents, except during inclement weather. Under von Steuben, the company mess tent came into being.

The training provided by von Steuben is usually described as being mainly directed at the men in the ranks, but in fact he provided training as well on how officers should both lead their men and preserve their health and welfare. “The oftener the soldiers are under the inspection of their officers the better”, he wrote, “â€¦see that their clothes are whole and put on properly; their hands and faces washed clean; their hair combed; their accoutrements properly fixed, and every article about them in the greatest order”. Von Steuben’s concern with cleanliness extended to camp and soldier, and many men who had bathed infrequently, if at all, were admonished that, “the men shall bathe themselves as frequently as possible”, though he recommended a period of repose first to allow the men “to get cool”.

18. The Continental soldier responded to the beat of a different drum

The soldiers of the Continental Army responded, on the march, in battle, and in camp, to signals made to the regiments by drums. Even the call for recruits in towns and villages was often preceded by a drummer to gain the attention of the residents. Drum calls beaten in camp were also used in battle, though with different meanings. A drum signal which in the field called for a parley with the enemy was used in camp as a call for church services, for example. Fatigue parties were called forth through a drum signal. The day began with the beating of reveille, calling forth the troops from their tents or huts, and ended with the tattoo, which directed the troops back in their tents, where unless they had duty they were to remain until morning, other than answering calls of nature.

There were specific drum calls telling the companies to gather firewood, to gather water, and to assemble for provisions, the latter being called roast beef by von Steuben, somewhat ironically since meat was frequently absent from the provisions. When meat was available it was often pickled in salt, either beef or pork, and in the summer months the heavily salted diet contributed to the considerable thirst the Continental soldier suffered on the march. Drinking on the march from one’s own canteen was not permitted except during rest breaks, which were also signified by drums. Troops who indulged in the habit of tobacco were allowed to consume the product either by smoking a pipe or chewing. Since matches had yet to be invented, pipe smoking on the march was rare.

19. The Continental soldier was subject to fines despite infrequently being paid

By 1780 von Steuben’s regulations were in effect in all of the encampments of the Continental Army, though their efficiency was reliant on the ability of the officers imposing them. French supplied equipment, especially in the areas of arms and clothing, were becoming more readily available, at least to the main army under Washington, which was in encampments and fortifications around New York. The French maintained their main base in the United States at Newport, Rhode Island, and supplies passed between the armies both across Connecticut and along the coast line, protected by the French Navy and coastal forts.

The supplies issued to the troops were expected to be maintained properly, and marked with the initials of the owner as a deterrent to theft. Items which were missing at morning inspections were to be replaced, but the soldier who had lost the item was fined. Since the soldiers had no money to pay the fine because pay was irregularly distributed at best, the fine was entered into the books as a stoppage of pay for the amount of the fine. Losing a musket flint cost the soldier one twentieth of a dollar, loss of the musket itself resulted in a stoppage of fifteen dollars, over two months of a private’s pay. Losses of equipment due to lack of proper care on the part of the soldier responsible could also make him liable to military discipline.

20. The Continental Army also provided written instructions individually to men of all ranks

By the time of the Franco-American victory at Yorktown, which effectively ended the hostilities of the Revolutionary War, the soldiers known as Continentals were members of a professionally officered army, with written instructions (by von Steuben) as to how they should comport themselves at all times. Since a significant portion of the Continental Army was unable to read, the instructions were read to them by an officer or non-commissioned officer. A soldier was instructed to “dress himself with a soldier like air”, and to “wash his linen and cook his provisions”. They were instructed to “acquaint himself with the usual beats and signals of the drum, and instantly obey them”.

The Continental Army began disbanding before the British evacuated New York, but enough regiments remained in place along the Hudson River for the Army to be led by the only commander it had throughout its existence, George Washington, into New York on November 25, 1783. Efforts by the troops to obtain their back pay and other promised inducements met varying levels of success. In 1818 Joseph Plumb Martin applied for a war pension for his service during the Revolutionary War and succeeding in obtaining a pension of $96 per year (about $1,800 in 2018). His service with the Continental Army had included the Battles of Long Island, Harlem Heights, Germantown, Monmouth Court House, and Yorktown, as well as others during the war. Only at Yorktown had he seen the Continental Army clearly prevail.

“Rebels and Redcoats: The American Revolution Through the Eyes of Those who Fought and Lived it”. Edited by Hugh F. Rankin. 1987

“Revolutionary Rangers: Daniel Morgan’s Riflemen and their Role on the Northern Frontier”. Richard B. LaCrosse Jr. 2002

“Regulations for the Order and Discipline of the Troops of the United States”. Baron Friedrich Wilhelm von Steuben. 1794 edition.