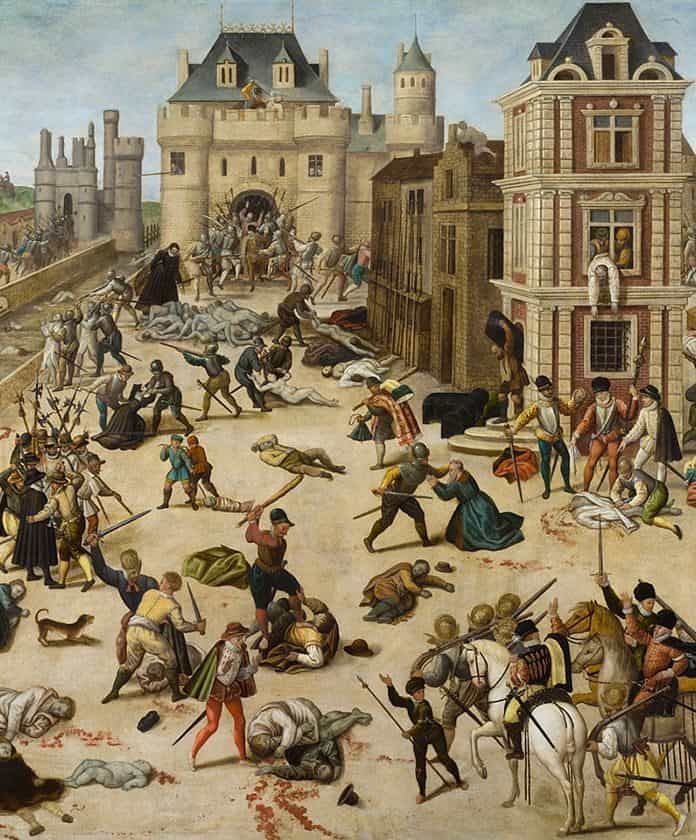 In August 1572, French Huguenots (Calvinist Protestants) flooded to the Catholic stronghold of Paris to witness the royal wedding of the Princess Margaret of Valois to King Henry of Navarre. The political match intended to heal the French Wars of Religion that had plagued the country for ten years, but it had the opposite effect. Decades of tensions between Catholics and Huguenots exploded into a massacre on St. Bartholomew’s Day, causing the waters of the Seine River to run red with blood.

France became deeply divided after the Protestant Reformation in the early sixteenth century. Initially, the new religion reached the lower classes, but it soon spread among members of the nobility. The new Protestant elite conflicted with the high-ranking Catholics of the country. The religious divide projected into the royal succession, in which the Catholic Valois family and the Protestant Bourbon family both claimed descent to the throne. The tensions imploded in March 1562, beginning the French Wars of Religion.

After the warfare ended with the Edict of St. Germain in 1570, the moderate group, the Politiques, advised King Charles IX to embrace both religions to maintain the peace. The monarch and his regent, his mother Catherine de Medici, increased their tolerance of the Huguenots. In September 1571, King Charles IX appointed the Admiral Gaspard de Coligny, the highest-ranking Protestant in France, to his council, inviting more Huguenots to the royal court. To prove their sincerity towards Protestants, Catherine arranged a royal wedding that would end in disaster.

The royal council announced the upcoming royal marriage between the Catholic Margaret of Valois and the Huguenot King Henry of Navarre. Although the union between King Charles’ sister and the King of Navarre meant to heal the rifts between Catholicism and Protestantism, it also had a political goal. It would include the Bourbon family in the French succession, ending the conflicts between the two families. However, the wedding could not have come at a worse time for the struggling country.

As the royal family raised taxes to fund the celebration, the crops failed. The opulent displays to celebrate the match fueled the resentment of the starving French population towards the elite. Although the French Wars of Religion had passed for the moment, tensions between the Catholics and Protestants continued. The Pope himself condemned the union. The Catholic nations of Europe opposed the religious tolerance that the wedding represented. All of the members of the Parlement of Paris, the city’s representative body of government, refused to attend. Despite the protests, the royal family did not cancel the wedding.