This Day In History: The Rosetta Stone is Found (1799) 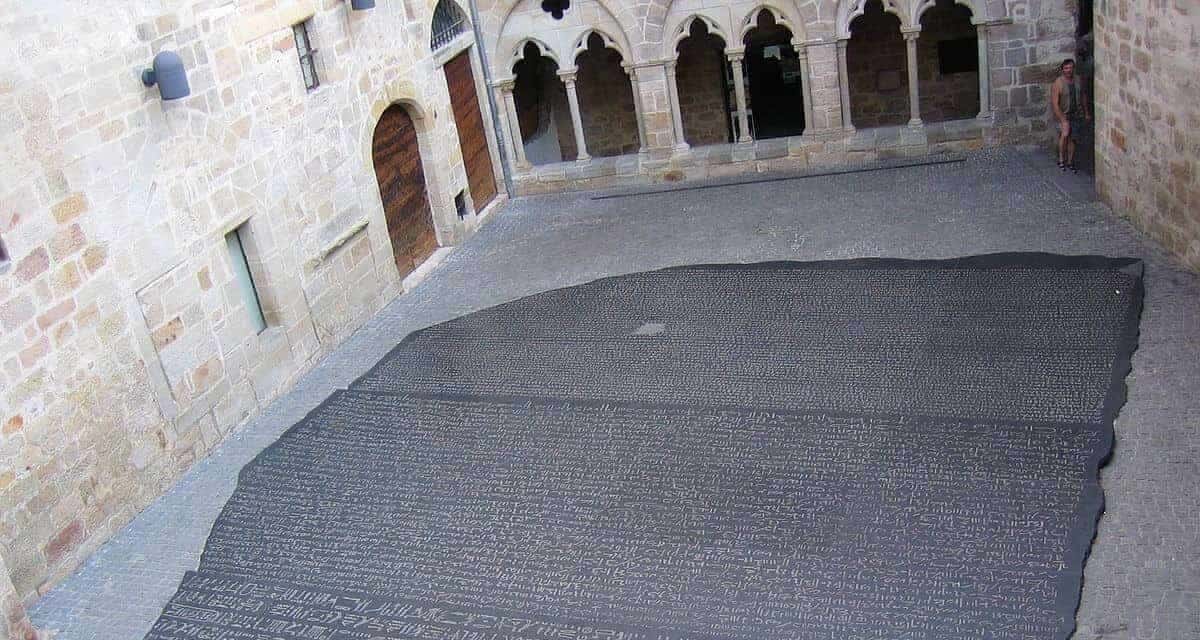 This Day In History: The Rosetta Stone is Found (1799)

On this day in 1799, during Napoleon’s invasion of Egypt a French soldier discovers a black basalt stone that was inscribed with writing. It was to change history and was allow the modern world to understand the language and the world of Ancient Egypt. The stone was found north of Rosetta. It contained several languages, they include Greek and two versions of Egyptian. The stone was concerned with the honors ascribed to a priest by Ptolemy v, an ancestor of Cleopatra. The Greek passage announced that the three scripts were all of an identical meaning and narrated the same events The stone was able to allow westerners and indeed people for several centuries to understand ancient Egyptian – a language that was considered indecipherable and ‘dead’. Indeed no one had read or spoken the language in almost 2000 years since Egypt was a province of Rome.

Napoleon invaded Egypt in 1798 and he quickly defeated the Mamaleuks, the ruling class in the country in a battle, this was known as the Battle of the Pyramids. The French quickly occupied the country. Napoleon saw himself as an enlightened man and he brought many scholars and scientists with him. He ordered them to seize everything of cultural or historical significance and take them back to France for study.

Pierre Bouchard understood this order and he knew he had to alert Napoleon when he found the basalt stone with its weird writings. However, it was not brought back to France as Napoleon had intended. Bonaparte returned to France in 1800 in order to fight the Allies in Italy. He left behind him some 40,000 men in Egypt. When the British defeated the French in 1801, after the Battle of the Nile, they then invaded the country and quickly overpowered the remaining French forces. Then they confiscated the black stone with the three scripts and they brought it back to London.

Luckily for French scholars, Napoleon had ordered the scripts that were engraved on the black stone to be copied. Scholars sketched the images on the stones and also the Greek. These copies soon were published and they were soon circulating all over Europe.

Scholars started to try and decipher the writings on the stone. They knew that if they could then they would be able to understand ancient Egyptian. This is because they knew that there were many of Egyptian writing on papyrus and engraved on walls. They needed to decipher the enigmatic script in order to understand Ancient Egypt, all that was known about the Empire and culture was from the Bible or Classical writers and they knew nothing about the early centuries of one of the world’s greatest civilisations. There was a great rivalry between French and English scholars to be the first nation to decipher the stone and to be the first to understand the language in 2000 years.

French Egyptologist Jean-Francois Champollion (1791-1832), was a childhood prodigy who had taught himself ancient languages. He taught himself Coptic, a language spoken and used by Coptic Christians in Egypt. This and his knowledge of Greek allowed him to decipher the stone. Although he did build on the work of earlier English scholars such as Young. He presented to the world the system of symbols or hieroglyphs that represented ancient Egyptian. Hieroglyphics used pictures to represent objects, sounds, and groups of sounds. Once the Rosetta Stone inscriptions were translated, the world of ancient Egypt was brought to life.

The stone has been housed in the British Museum since the early 1800s.