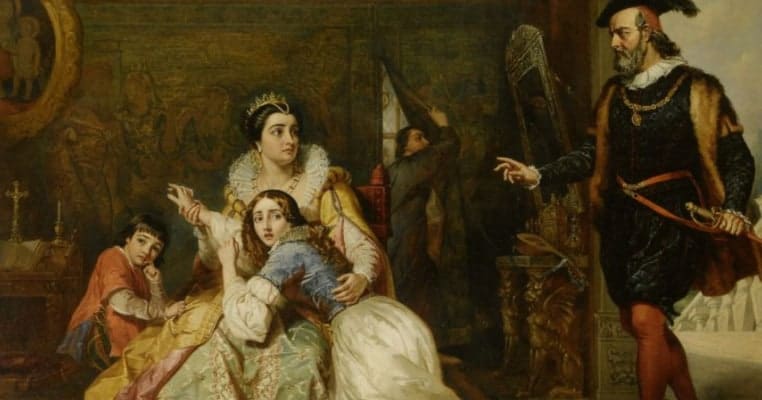 The Path to Conspiracy

Beatrice Cenci (1577 – 1599) was the youngest of seven children – five sons and two daughters – sired by Count Francesco Cenci on his first wife. The Cenci were an ancient Roman patrician family, that claimed descent from the gens Cinci. The family lived together in the count’s palace in Rome, but when the mother, whom the count had routinely abused, died when Beatrice was seven years old, she and an elder sister were sent to be raised by nuns in a monastery.

A brutal man, Count Cenci used his inherited wealth to indulge his tastes for depraved violence with impunity, which earned him the hatred of Rome’s people. His depravity – although not that directed against his own family – eventually caught up with and landed him in trouble with the authorities, and got him imprisoned. His aristocratic lineage and wealth, however, ensured that he was treated with leniency. While their father was temporarily locked up, Beatrice’s elder siblings found ways to escape the abuse. One of Beatrice’s brothers, Giacomo, simply disowned his wealthy father and left, two other brothers got themselves killed in duels, and her elder sister successfully petitioned the pope for permission to marry without her father’s consent.

Beatrice was less fortunate, however: she told the authorities that her father had raped her numerous times, but they did nothing. When he got out of jail, he promptly shipped Beatrice, along with his second wife, Lucrezia, and his youngest son by her, Bernardo, out of Rome and to his stronghold, La Rocca. Secluded in his castle, and away from the eyes of the authorities in Rome, Count Cenci’s perversities increased, and the lives of his daughter and second wife became even more hellish.

In addition to repeatedly raping her, Beatrice’s father made her scrape scabies from his bodies, including from off his testicles. He also made his daughter and her stepmother share a bed with him. In desperation, Beatrice wrote to her elder brother, Giacomo, beseeching his aid. She also contacted the authorities, once again, but once again, they did nothing. Worse, the count found one of Beatrice’s letters begging for help, and beat his daughter bloody in retaliation.

Beatrice decided that the only way to end the nightmare that was her life was by ending the life of her father. So she began planning to bring that about. Her stepmother, Lucrezia, had also had enough of count Cenci’s abuse, and she agreed to help. So did Beatrice’s brothers, Giacomo and Bernardo. Beatrice was the plot’s ringleader, and she enlisted the help of the castellan, Olimpio Calvetti, by seducing him. She also hired another accomplice, a man named Marzio, to act as a hitman.

The plan was relatively straightforward. Olimpio Calvetti and Marzio were to kill Count Francesco Cenci in his bed, than toss him out a balcony, staging the scene to make it look like an accidental fall. Accordingly, on the night of September 8-9, 1598, Beatrice slipped her father a sleeping potion to knock him out. Olimpio and Marzio then snuck into his bedroom, held him down, and drove an iron spike into his head. They then dressed his body, and threw him over the balcony’s edge, breaking a part of it to make it look like it had collapsed. The duo then gathered the bloody bedsheets, and fled.

However, the killers had done a sloppy job in covering their tracks. The fatal wound in the count’s head did not correspond to a wound from a fall, and while Olimpio and Marzio had taken the bloody bedsheets, they neglected to wipe blood spatters from elsewhere in the count’s bedroom. It did not take the investigators long to realize that Francesco Cenci had been murdered, nor did it take them long to realize that the culprits were his own family members.

The papal authorities arrested Beatrice, her stepmother Lucrezia, her brothers Giacomo and twelve year old Bernardo, and her lover and hitman, Olimpio, and tossed them all in jail. The other hitman, Marzio, fled into the mountains, but was tracked down and killed by one of Count Cenci’s relatives. The people of Rome, who knew what kind of man Francesco Cenci had been, figured he deserved his fate, and sympathized with Beatrice and her coconspirators. However, Pope Clement VIII, ruler of Rome and the papal states where the crime had taken place, had other ideas. Viewing patricide as a heinous crime, and worried that leniency might encourage other children to murder their parents, the pope authorized the torture of the accused.

They began with Olimpio, the lowest socially ranked of the conspirators, but he kept mum, refusing to confess or implicate his lover, Beatrice, until he died during the harsh interrogation. Beatrice’s brother Giacomo was not as tough, however. He had not been at the Cenci castle on the night of the murder, but under torture, he spilled out that his younger sister had been the chief culprit, and that she had planned everything. The rest of her family also broke under torture, and Lucrezia and young Bernardo pinned the blame on Beatrice as the ringleader. Beatrice was made of sterner stuff, however, and withstood the torture, including getting stretched on the rack, without admitting to anything. The confessions extracted from the rest of the family were sufficient, however. In a subsequent trial, all were found guilty, and were sentenced to death.

The people of Rome protested, and managed to get the execution postponed, but it was only a temporary reprieve, and Pope Clement VIII insisted that the sentences be carried out. On September 11th, 1599, the Cencis were taken for execution in front of the Sant’Angelo castle in Rome. Giacomo got the worst of it, getting tortured in a cart en route to the scaffold. Once he got there, his head was smashed in with a mallet, then his corpse was quartered. Lucrezia and Beatrice were then executed, more swiftly and mercifully, their heads chopped off with an ax. At the last minute, twelve year old Bernardo, who had been forced to watch the deaths of his mother and siblings, was spared execution, and sentenced to life as a galley slave. However, he was freed a year later. The Cenci property was confiscated – and given to Pope Clement VIII’s family.