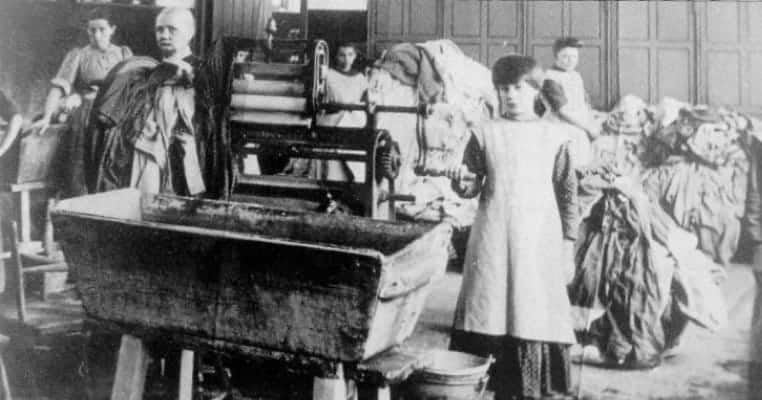 The Donnybrook Laundry opened in 1796. By 1837, the Sisters of Charity had taken over the institution and relocated it to Dublin 4. Between 1837 and 1992, inmates cleaned soiled linens from nearby hotels. When inmates arrived at Donnybrook, the nuns changed their name before sending them to strip out of their clothing, bathe, and dress in a new uniform. With names changed, it was difficult for family members who wanted to find sisters or daughters to do so. Any inmate that refused to adhere to her new name was severely punished.

Like other Magdalen Laundries, Donnybrook housed orphans. Younger girls took care of the babies. As these girls aged they cooked for the nuns and then entered into the washing house. Obedient girls were promoted to the pressing room and later the packaging room. Food for the inmates was meager and consisted of mostly leftovers from the nuns and rarely included dairy, eggs, or meat. A private company purchased the Donnybrook Laundry in 1992 maintaining it as a commercial laundry. It closed in 2006. An application to demolish the laundry and build new apartments was withdrawn in 2017 reportedly due to the “potential for burials being uncovered.”

1. The Last Magdalen Laundry: The Gloucester Street Laundry in Dublin

Until recently, the powerful conservative Catholic Church controlled almost every aspect of life in the Republic of Ireland. Any young woman that found herself pregnant and unmarried had committed the most dire of all sins. Bringing shame, family members often sent their pregnant sisters and daughters to a magdalen home. The Gloucester Street Laundry in Dublin housed around 100 unwed mothers at a time. Forced to repent for her sin, these young women were hidden away inside the walls of a commercial laundry. Nuns provided shelter and meager food allotments while forcing them to work in laundries while they adopted out the bastard children.

The convent owned trucks. Boys and young men drove the trucks to Dublin hotels, picked up soiled linens, and then delivered them to the Gloucester Street Laundry. The nuns made sure that there was not contact between the divers and the “penitents.” Historians believe that over 40% of the inmates at the laundry entered as unwed pregnant young women. Many inmates returned to life in Dublin and beyond, their babies long removed from their care. Others remained institutionalized for the rest of their life. The Gloucester Street Laundry shuttered good on 25 October 1996. At the time of closure the oldest female resident was 79.

Congregation of the Sisters of Misericorde– Wikipedia.