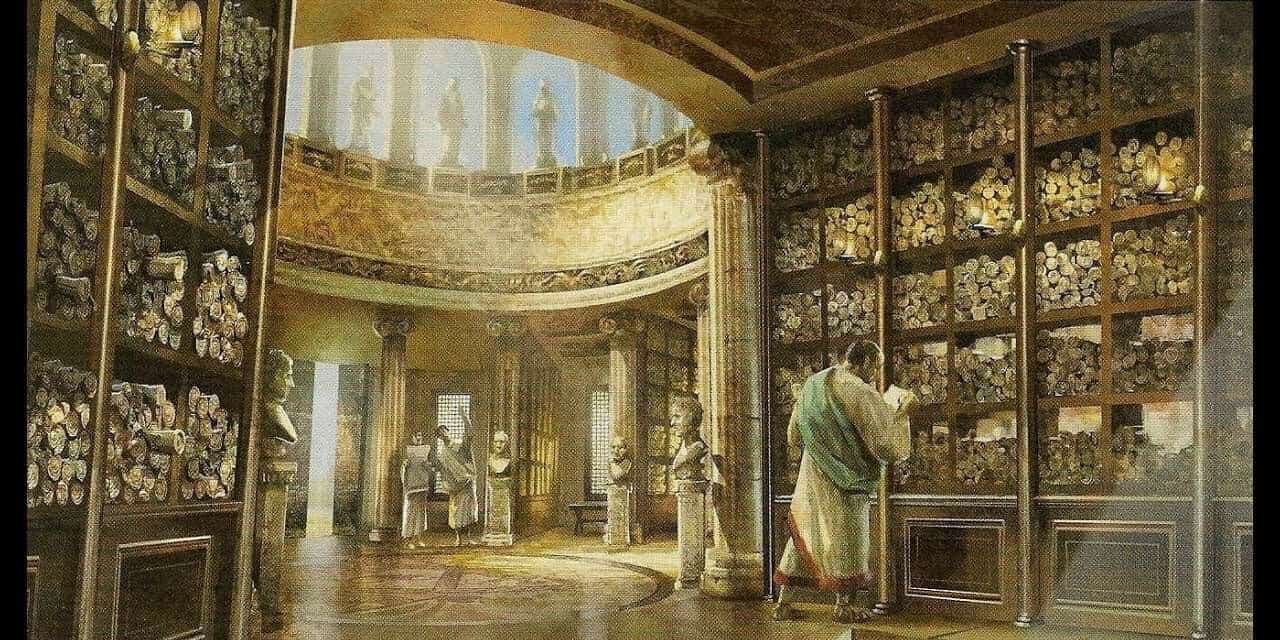 7. The Villa of the Papyri in Herculaneum was destroyed when Vesuvius erupted but thankfully its unique private library survived the disaster.

The town of Herculaneum was almost completely destroyed when Mount Vesuvius erupted in the year 79. Located in the foothills of the volcano, many of its residents would have had fine collections of art – and of books. However, just one private library survived the most famous natural disaster of the ancient world. The collection of the so-called Villa of Papyri is truly unique, offering a rare glimpse into the public and intellectual life of Rome. In the aftermath of the Vesuvius eruption, Herculaneum was left covered in 30 meters of volcanic ash. The town was only excavated in 1750.

The Swiss engineer Karl Weber dug tunnels through the ash, uncovering the town’s secrets. One of the key findings a huge private library. What’s more, around 1,800 manuscripts, all of them papyrus scrolls, had been carbonized due to the heat of the eruption. Almost all were stored in wooden tubes. By the middle of last century, not even 200 of the 1,800 had been deciphered. More recently, technology has allowed scholars to scan and digitize almost all of the writing. It’s been shown that much of the library was devoted to philosophy, though the collection also included poetry and histories.

6. The Royal Library of Antioch was a library fit for a king, with the most famous Greek poet of the age employed as its chief librarian.

For more than two centuries, Ancient Syria was possibly the most enlightened place in the world. especially during and immediately after the reign of Antiochus III, otherwise known as Antiochus the Great. It was he who ordered a library to be built. And it was he who supervised its collections – or, more specifically, he appointed Euphorion of Chalcis as the chief librarian in 221BC. The Greek poet was able to identify and source key works for the king’s collections, he also attracted other thinkers to Antioch, helping establish the city as a hub of research and philosophy.

Sadly, nothing concrete is known about the collections. While it’s assumed that they contained key works from across the ancient world, no formal records remain. All of them were destroyed more than 1,700 years – and, indeed, the destruction of the Royal Library of Antioch is one of the most infamous episodes of the era. According to the legend, it was the wife of the Christian Emperor Jovian who urged him to burn the library to the ground in 363. However, the story of Jovian dancing, drinking and cavorting with his concubines while the library burned is almost certainly exaggerated.

5. The Library of Celsus was built by a Roman Consul in honor of his father – and he buried the old man under its western wall.

Located in the city of Ephesus, in modern-day Turkey, the Library of Celsus was the third-largest library in the whole of the ancient world, after only those famous libraries at Alexandria and Pergamum. As the Latin inscription found in the front staircase states, the library was built by Gaius Julius Aquila in the year 110. He constructed it to honor his dead father, Gaius Julius Celsus Polemeanus, who served as the Roman governor of Asia Minor. Moreover, the son also ordered his father to be buried under the western wall of the library, right next to its rich collections.

It’s believed that the Library of Celsus held as many as 12,000 manuscripts. Most would have been either in Latin or in ancient Greek, with a particular emphasis on the night sky, medicine and philosophy. All of the scrolls were housed in small niches built into the walls. Moreover, they were protected from the heat and humidity thanks to the innovative design of the building: the architects ensure that there was a gap between the outer and inner walls, a clever innovation for the time. Tragically, the Library of Celsus was almost completely destroyed in an earthquake in 262.

4. The Library of Pergamum was second only to the legendary Library of Alexandria – until the Romans came and Mark Anthony stole its collections for his bride-to-be.

Under the enlightened guidance of King Eumenes II, the city of Pergamum (in modern-day Turkey) was transformed from a small town into a thriving, cosmopolitan metropolis. At its peak, it was home to 200,000 people, making it one of the largest cities in the whole of the ancient world. And at the centre of it all was the library. Commissioned by the King himself in around 170BC, it soon became the second most important library in the world, second only to that found in Alexandria. Scholars estimate that the library housed as many as 200,000 volumes.

Works brought by visitors to Pergamum were copied by the library’s own team of translators and scribes, ensuring the collection was kept up-to-date and included knowledge from across the known world. But while the priceless papyrus rolls may well have been protected from the elements, the library itself was still vulnerable to the forces of history. When the Kingdom of Pergamon fell to the Romans in the year 133BC, the library was plundered. According to one account, in 43BC, Mark Antony took the whole collection of 200,000 manuscripts and gave them to Cleopatra as a wedding gift.

3. The Royal Library of Ashurbanipal was so impressive that when Alexander the Great saw it, he demanded that he have a library built for him.

The Royal Library of Ashurbanipal was commissioned by King Ashurbanipal, the last of his dynasty. He wanted a library fit for royalty and one that would present him as an enlightened and educated man. It was built close to the modern-day city of Mosul, Iraq, and was, for the time, a huge project. The King donated his personal collection to the library, making key works available to priests and scholars, and over the years, the collection grew in size and breadth. Most works were collected from across Mesopotamia, above all from Babylonia, with text copied from parchment onto clay tablets.

Around 30,000 such tablets were discovered by archaeologists in the 19th century. The undoubted highlight is The Epic of Gilgamesh, a masterpiece of Babylonian poetry and the oldest-surviving work of great literature anywhere in the world. In 612BC, the city of Nineveh, where the Library of Ashurbanipal was located, was raided. The palace was burned down, engulfing the library too. Fortunately, while countless wax manuscripts would have been lost, the clay tablets survived the destruction. Today, the Ashurbanipal Library Project continues working to catalog all of the 30,943 tablets found where the library once stood.