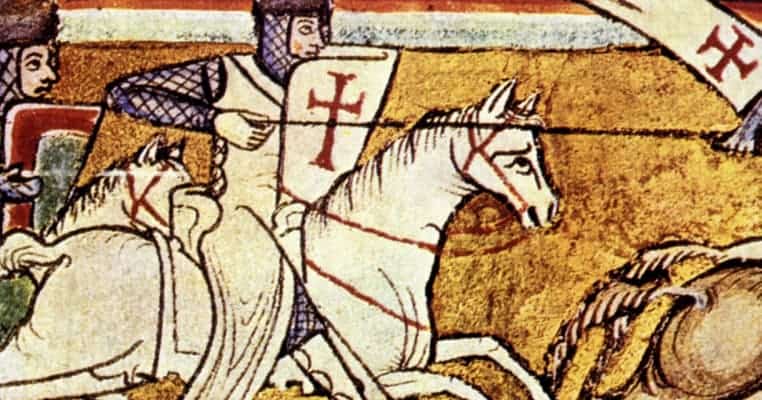 6. The Knights Templar Were Warrior Monks

But make no mistake, the Knights Templar were by no means white-collar bankers. They were warrior monks who had been training in armed combat and warfare since the age of seven. To be initiated into the order, you had to be a knight already. And the order was an order of monks. This idea is quite peculiar, seeing as things like poverty and chastity traditionally characterize a monkish lifestyle. The concept of a monk riding a horse into combat, decked out in chainmail and bearing a double-edged sword, runs counter to how many people think of monks.

What is particularly surprising is that these monks were not just soldiers; they were vicious. If you were faced with an entourage of Knights Templar, mounted on horseback and carrying their weaponry, your best option would be to run in the other direction. They were characterized by the brutality that far exceeded that of the peasant armies. One way that they might be recognized as monkish, however, is their poverty. Even though the order itself was incredibly wealthy, to join, a knight had to sell the order all of his possessions. The knights themselves had no belongings. However, as members of the Knights Templar, they had everything.

5. They Followed a Strict Code of Conduct

Knights in the Middle Ages were sworn to chivalry, which dictated how they were to behave both in their personal and private lives. The Knights Templar were also bound by a code known as the Latin Rule, which began when the founder, Hugues de Payens, consulted with Bernard of Clairvaux. The Latin Rule specified that the knights were never to leave a battle until the order’s flag was waving over the battlefield; they were to die instead of retreat. They were never to be taken captive so that ransom money could never be paid for them; instead, they were to commit suicide. Ultimately, the reward was heaven.

Knights became bound by the Latin Rule when they were first initiated into the order. However, as it was a secret society, little is known about what the initiation rites were. Some believe that it involved worship of the head of John the Baptist or homosexual acts. The order came to be viewed as a “church within a church,” due to its autonomy, so some speculate that the initiation rites included mystical rituals that would be seen as adverse by the church. Whatever the case, members of the Knights Templar were to never, ever break the Latin Rule.

4. The Knights Templar Were Accountable Only to the Pope

The Knights Templar were arguably not only the first international bank but also the first multinational corporation. Multinational corporations are notorious for having more power, functionally speaking, than the national governments. Consider Apple, which dared to tell the federal government that it would not provide the key to unlocking its phones, even as part of a shooting investigation. Historians argue that functionally, the Knights Templar existed as not only a church within a church but also as a state within a state, meaning that they had more power than the kings.

To solidify that power, in 1139, Pope Innocent II issued a papal bull, an authoritative statement from the Vatican, that claimed that the Knights Templar were accountable only to the pope. Some believe that this bull was a form of “hush money” to keep them silent on secrets about the church that they had uncovered. They could travel freely across international borders and would not have to pay any taxes on the money that they earned. They were also immune to local laws, though the Latin Rule prohibited them from engaging in egregious conduct. However, their wealth and power proved to be a threat to some kings and ultimately led to their demise.

Salah al-Din, known to the Christian Crusaders as Saladin, was a sultan from Egypt who led his forces against the Crusaders in the attempt to liberate the Holy Land from the Christians and return it to its prior Muslim rule. The Knights Templar had defeated Saladin’s army on several occasions, but in July of 1187, Saladin’s forces were victorious at the Battle of the Horns of Hattin. They surrounded the Knights Templar, who were far outnumbered, and massacred them. This decisive victory was the beginning of the end for the Kingdom of Jerusalem. A Third Crusade was launched to try to reclaim it, but it was unsuccessful.

The Knights Templar in the Holy Land, who was headquartered at the Temple Mount and protected pilgrims on their journey to Jerusalem, was ultimately finished. However, they continued their activities throughout Europe, including banking. Their banks had made them so wealthy that they were offering loans to kings. They moved their headquarters to Paris, France, which later came under the kingship of Philip IV, also known as Philip the Fair. Philip the Fair became heavily indebted to them, and because his father had pretty much bankrupted France through his military expenditures, he had no money to pay them back. Their wealth would prove to be their undoing.

2. They Were Systematically Rounded Up on Friday the 13th

In the year 1307, King Philip IV of France was in a genuine crisis, owing large amounts of money to the Knights Templar and having inherited a ruined economy from his financially inept father. He would not be able to pay them the money that he owed, so he came up with a plan. He had an order sent out to his soldiers, which was not to be open until Friday the 13th. The letter gave orders to raid all of the command houses of the Knights Templar in France and imprison its members. They were then subjected to the Inquisition.

The Inquisition was a feature of the Vatican that was designed to weed out heresy, or false beliefs, through the use of torture. Though the Vatican had long been friendly with the Knights Templar, the pope at the time was unable to provide any assistance to them. Approximately 138 of the knights were faced with cruel torture, under which they confessed to crimes such as urinating on the cross, denying Jesus, and worshiping the devil. Many of them either died under torture or were burned at the stake. To this day, Friday the thirteenth is considered to be unlucky because of what happened to the Knights Templar on that fateful day.

Ultimately, though, the actions of Philip IV towards the Knights Templar did not provide the economic boon that he had hoped. He was only able to recover enough of their land to pay for the torture and imprisonment that he subjected to. There were vast rumors about an immense treasure that the knights had, which he may have hoped would enrich both his personal treasury and his kingdom, but the wealth was nowhere to be found. In fact, there is evidence that many of the Knights Templar’s documents were burned shortly before Friday the thirteenth, and any treasure that they may have had was whisked away in ships that very morning.

1. Many Treasure Hunters still Seek the Legendary Treasure of the Knights Templar

The Knights Templar gain cultural prominence in every generation. They were the subject of Indiana Jones and the Last Crusade when the rogue archeologist embarked on a quest for the Holy Grail. Many believe that they were the predecessors of the Freemasons, who continue to hold their secrets, which they used to construct the democracy of the United States. But what most interests Knights Templar enthusiasts is the legendary treasure, possibly from the Temple of Solomon, that they supposedly hid.

Only about 10% of the Knights Templar were subjected to the imprisonment and tortures of King Philip IV. Many of them lived outside of France or received word of what would happen and fled. All told, there may have been thousands who survived the events of 1307. However, they no longer had a leader and would have to fend for themselves. And any treasure that they may have had – the Holy Grail, the Ark of the Covenant, wood from the real cross, documents, gold, or anything else – would have to be kept secret.

Some believe that the Knights Templar may have traveled to the New World. The evening before Friday the thirteenth in 1307, there was a fleet of 18 ships belonging to the order docked at a harbor in France. The next day, the fleet had disappeared, and there is no documentation as to what happened to them. Circumstantial evidence suggests that a group of knights may have carried their treasure onto the ships and set sail for shores beyond mainland Europe. Many of them had descended from the Vikings, so the theory suggests that they first sailed to Iceland, then Greenland, and finally to the New World, long before Columbus. Some believe that the purported treasure at Oak Island in Nova Scotia is of Templar origin, seeing as there is Templar iconography around the site.

Others believe that the treasure may be buried somewhere in the crypts of Rosslyn Chapel in Scotland. Scotland was excommunicated from the Catholic Church at about the same time as the order fell in 1307 when its king, Robert the Bruce, killed one of his opponents in a church. It may have been seen as a haven for those fleeing the church. Circumstantial evidence suggests that they may have come into contact with the Sinclair family, the proprietors of Rosslyn Chapel, where they buried their treasure. Some have even tried to engage in a rogue excavation of the crypt, but they were met with legal resistance.

Whatever the case may be, nothing keeps a good story going like a modern treasure hunt. So we still enjoy reading and theorizing about the Knights Templar today.

“Secrets of the Knights Templar.” Documentary by The History Channel.

“Who were the Knights Templar?” by Elizabeth Nix. The History Channel. October 17, 2012.