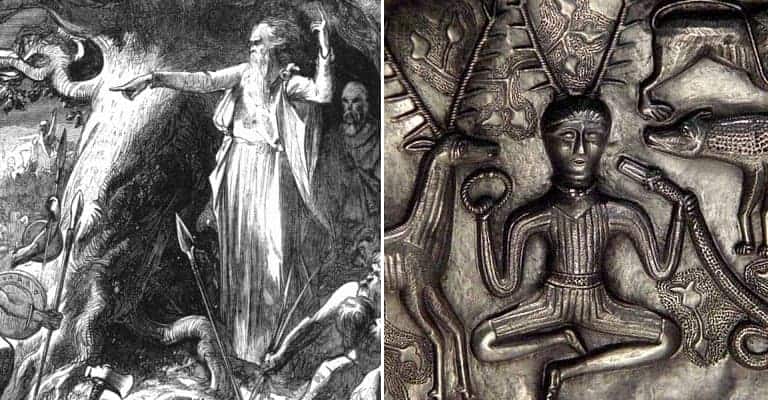 2. Britain’s time as part of the Roman Empire saw it exposed to many new religions

From the mid to late imperial period, towns in Roman Britain was exposed to many new up and coming cults that originated in the eastern Roman Empire. These mystery cults offered both worldly and otherworldly benefits to their adherents. Christianity was just one of those cults. No physical evidence- such as public churches and iconography- exists for Christianity in Britain before the fourth century. This lack of evidence is most likely because, before this time, the religion was illegal and adherents needed to be discrete. However, this aside, it seems Christianity had stiff competition from a variety of other eastern cults.

One of these was Mithraism, a Persian cult that had become particularly popular with soldiers and merchants across the empire. Numerous Mithraea, the semi-subterranean halls were the cult’s initiations took place, have been found around Roman forts and major Roman settlements such as London. Archaeologists discovered the London Mithraeum in 1954, in what would have been the heart of Roman Londinium. First constructed in the mid-third century AD, by the time Christianity had legally establishing itself in the fourth century, it was still going strong. Christianity, it seems, had plenty of competition for the hearts and souls of the Romano British.

1. There is a theory that Buddhism may have established itself in British before Christianity

Two thousand three hundred years ago, the Mauryan king, Ashoka became a Buddhist convert and zealously began to practice his new faith. The previously warlike king abandoned conquest and began to establish free water, aid and hospitals to his people- a fledgeling welfare state. However, Ashoka was also determined to spread the message of Buddhism. So he began to send out missionaries-some of whom made it to Ireland and Britain.

According to David Mackenzie, Ashoka’s missionaries reached Britain before even Julius Caesar. The religion did not dominate the island as Ashoka may have hoped. However, this was probably because it blended with pre-existing druidic beliefs. The Celtic god, Cernunnos absorbed certain attributes of the Hindu Buddhist god Virupaksha – such as the horned snakes both gods are depicted holding. In addition, both religions held the common belief in reincarnation.

The secrets of Paviland Cave, Stephen Moss, The Guardian, April 25, 2011

Encyclopedia of Mysterious Places: The Life and Legends of Ancient Sites around the World, Robert Ingpen and Philip Wilkinson, Viking Studio Books, 2000

An Introduction to Prehistoric England (Before AD 43), English Heritage.

Ritual Mysteries in a Prehistoric Flint mine, English Heritage

Cult of the Head? Craig Melia, Celtic Heritage: Culture, beliefs and Traditions of the Celtic peoples. 2005

The Annals of Imperial Rome, Tacitus