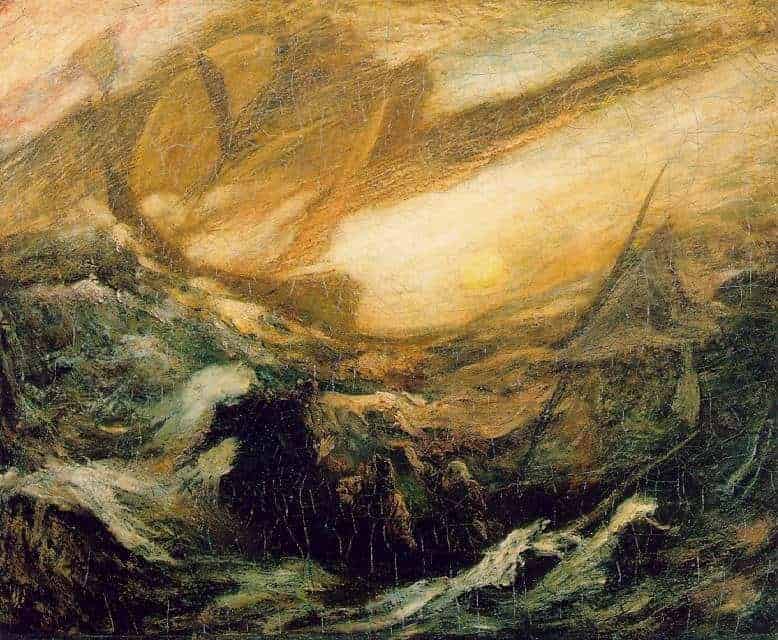 For centuries, the legend of the Flying Dutchmen has captured the imagination. The story tells how the shades of the doomed ship and its crew are condemned to wander the world’s oceans for eternity without ever reaching land- all because of her captain’s fateful decision to sail into fatal seas. The legend has inspired the imagination of playwrights, poets, and painters. It has even become a feature of the popular “Pirates of the Caribbean” franchise, where the ship is known simply as Dutchman and sails under the command of the fictional captain, Davy Jones.

The adoption of the Legend of the Flying Dutchman by popular culture seems perfectly natural. After all, it is nothing more than a fable of the seas, a fairy tale concocted from the superstitious fears of sailors. Or is it? For as late as the twentieth century, sailors have been reporting sightings of the shade of the cursed ship, sailing the seas before them- something they regarded as a warning of impending bad luck or doom. So, is there any truth behind the myth? And if so, what inspired the legend of the Flying Dutchman?

The Legend of the Flying Dutchman

In the legend, the ship that became known as The Flying Dutchman was part of the fleet owned by the Dutch East India Company. These ships traveled between the Netherlands and the East Indies, transporting exotic silks, spices, and dyes back to the Dutch ports. At the time of its last, fateful voyage in 1641, the Dutchman’s Captain was a Hendrick Van der Decken. Van der Decken and his crew had an uneventful outward journey. However, the return one was very different.

Van der Decken was eager to return to Amsterdam as quickly as possible. So he decided to opt for the shortest route possible around the Cape of Good Hope. However, as the ship began to make its way around the cape, a fearful storm blew up. The terrified crew begged the Captain to turn back. In the earliest version of the story, the Captain, realizing his error agreed but was unable to turn the ship around and back into the harbor. However, in later versions, Van der Decken refused. Some claim that this was because the captain was drunk, others that he was mad. Whatever the reason, Van der Decken ignored his crew and took The Flying Dutchman straight into the storm.

Instead of concentrating on battling their way through the maelstrom, the crew mutinied, in the desperate hope they could then turn the ship about out of danger. They failed. Van der Decken killed the leader of the rebels and threw him overboard. As he did so, he declared that he would complete the journey around the Cape even if it took him “until Doomsday.” No sooner had he uttered these fateful words, than an angel appeared. It challenged Van der Decken’s words- and the unhinged Captain repeated them- sealing the fate of himself, his crew and his ship.

Another version of the legend places the fateful events in 1680 or 1729. This time, it is no angel but the devil himself who appears before Captain Van der Decken and condemns him to sail the seas for all eternity. However, unlike the angel in other versions of the story, Satan gives Van der Decken a get out clause. He can redeem himself and his ship through the love of a faithful woman. So, every seven years, the Captain was permitted to return to land to search for his salvation.

Whether an angel of a demon cursed Van der Decken, the outcome for the ship and crew was the same. The Flying Dutchman was lost in the storm. However, the ghosts of the ship, Van der Decken and his crew sailed on- not just around the Cape of Good Hope but also around the world. The ghostly vessel can be seen to hover just below the waves- or appear from beneath them. Either way, sailors regard a sighting of the ghost ship to be a sign of impending doom.

Sightings of The Flying Dutchman

On the face of it, the legend of The Flying Dutchman, sounds like a fable, warning against arrogance and reckless behavior at sea. However, many ship’s crews between the eighteenth and twentieth century have claimed to have seen the phantom ship. The first reference to a sighting of The Flying Dutchman appeared in John MacDonald’s “Travels in Various parts of Europe, Asia, and Africa during a Series of Thirty Years and Upwards” in 1790 when the author noted, “The weather was so stormy that the sailors said they saw the Flying Dutchman.”

In the years to come, other sailors would log their sightings of the ghost ship. Perhaps the most compelling report of a supposed sighting of The Flying Dutchman comes from 1881. On July 11, a vessel containing the future King George V, his brother, Prince Albert Victor and their tutor John Neill Dalton lay moored in the Bass Strait off the Australian coast between Melbourne and Sydney. The royal party was on a three-year voyage around the globe. However, a 4 am the Prince’s saw a sight they could not have expected when, as their log recorded, “the Flying Dutchman crossed our bows.”

“A strange red light as of a phantom ship all aglow, in the midst of which light the masts, spars, and sails of a brig 200 yards distant stood out in strong relief as she came up on the port bow,” described the royal report. “The officer of the watch from the bridge clearly saw her, as did the quarterdeck midshipman, who was sent forward at once to the forecastle; but on arriving there was no vestige nor any sign whatever of any material ship was to be seen either near or right away to the horizon, the night being clear and the sea calm.”

The log entry has a sinister postscript that seems to lend credence to the Dutchman’s ill-omened reputation. For the Princes also recorded that “At 10.45 a.m. the ordinary seaman who had this morning reported the Flying Dutchman fell from the foretopmast crosstrees on to the topgallant forecastle and was smashed to atoms.”

In 1939, beachgoers saw the Dutchman for the penultimate time on the South African coast. The British South Africa Annual drew upon local newspaper stories to report how “With uncanny volition, the ship sailed steadily on as the Glencairn beach folk stood about keenly discussing the whys and wherefores of the vessel. Just as the excitement reached its climax, however, the mystery ship vanished into thin air as strangely as it had come.” Three years later, four witnesses saw the Dutchman sail into Table Bay, off Cape Town. It vanished-never to be seen again.

So do these sightings mean that The Flying Dutchman is indeed a ghost ship whose sad tale has a basis in fact? If it is, those facts are hard if not impossible to verify. A real-life sea captain named Hendrick Van der Decken does not seem to have existed. Some sources have attempted to link Van Der Decken to the seventeenth-century Dutch captain called Bernard Fokke whose suspiciously speedy sea voyages between Java and the Netherlands led to rumors that he was in league with the devil. This link, however, is as much a thing of conjecture as to the legend.

However, what is true is that the Cape of Good Hope was a notorious place for shipping disasters. First navigated in 1488 by the Portuguese explorer Bartolomeu Dias, the treacherous stretch of sea at the tip of South Africa was known for its unpredictable weather, strong currents, and treacherous rocky outcrops. Such was the Cape’s reputation that it was first named “The cape of storms” before being renamed “The Cape of Good Hope“ by John II of Portugal because of the dubious shortcut it offered to India by sea.

Many ships did recklessly risk this shortcut for the same reasons as Captain Van der Decken in the legend. So, perhaps the legend of The Flying Dutchman does indeed immortalize them and their reckless Captains. However, the concept of ghost ships and souls doomed to wander the earth is as old as time. For shipwrecks off the coast of South Africa notwithstanding, some of the motifs found in the tale of The Flying Dutchman have been around since Classical times.

Ulysses’ seemingly endless ten-year quest to return home to the love of a good woman and the cursed roaming of “The Wandering Jew” both echo the Dutchman’s never-ending voyage. Then there is the idea of the ghost ship, which seems to have its basis in the Teutonic belief that the dead crossed the water to the afterlife in boats.

So, if the Flying Dutchman is nothing more than a fable, how do we explain how and why so many people have recorded seeing the phantom vessel? Optical illusions or mirages known as Fata Morgana seems to be one explanation. Such illusions are caused by the reflections of ships sailing some distance away from the viewing vessel. If the atmospheric conditions are correct, the sun’s rays can form a distorted image of these ships in the air and project it miles away from the original ship. The decline of sailing ships means that the likelihood of seeing a mirage based on one of them is slim- thus explaining why there have been no sightings of The Flying Dutchman since the first half of the twentieth century.

Cape Point – The Cape of Ghosts

Medium – The Ominous Legend of the Flying Dutchman

Ancient Origins – Legend of The Flying Dutchman, Ghostly Apparition of The Ship of Captain Hendrick

Source of the Legend of The Flying Dutchman, Music With Ease.