The Sutherland Family had 37 Feet Of Hair Between 7 Sisters 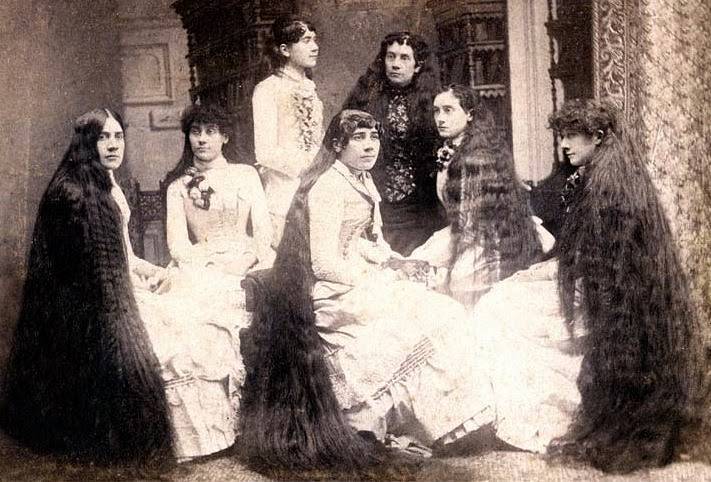 The Sutherland Family had 37 Feet Of Hair Between 7 Sisters

How women have turned the heads of men has changed over time. Many of today’s most prominent female stars, such as BeyoncÃ©, reached the top of the charts by wearing flashy costumes, dancing provocatively, singing her heart out, and even cutting off their long locks to a short cut. This showy display has not always been the case for women. In fact, during the 1800s, one of the most startling things women could do with their hair grew it as long as they could. And seven sisters did just that.

Realizing his daughters’ hair could bring them the spotlight and finances the family desired and needed, Fletcher and Mary decided to create a “medicine” which they claimed would make every woman’s hair grow just as long. The parents patent the medicine as “The Seven Sutherland Sisters Hair Grower.” Of course, this did not actually help to make hair grow faster or longer. The “medicine” combination consisted of salt, magnesium, hydrochloric acid, bay rum, and witch hazel. Hundreds to thousands of people bought the product, so the family quickly expanded their market to include combs, scalp care, and brushes.

With all this success, the family continued to expand their daughters’ agendas. With the “medicine” selling at an average American’s weekly salary, the sisters make public appearances to show off their hair and consult other people on how to grow their hair so long and fine, but they also started to open their own stores. These stores, which opened in New York and other states, were a type of salon that would allow people to come in and talk with a professional about the products to use and how to grow their hair like the Sutherland Sisters.

The oldest sister, Sarah, had the shortest hair out of the seven. Her hair only reached a length of three feet so, in order to make her hair look longer, the sisters would pose for pictures a certain way. Sarah would stand in the back, and the other sisters would sit or bend over so Sarah’s hair would look longer. Victoria had the longest hair out of all the sisters, it grew to a length of seven feet and would often drag behind her if she did not put her hair up.

Mary, the youngest sister, had a mental illness so the doctors would often blame her six feet of hair on her mental illness. Naomi generally wore her hair up in a four-foot-thick braid. However, when she took her hair out of the twist, her locks would fall to five and a half feet in length. By the mid-1880s, the family could not believe the amount of money and fame they received from the public. The sisters could not go anywhere without being noticed by fans.

A New Life For The Sisters

The sisters traveled throughout the 1880s and into the early 1890s. Due to all their wealth, they started to live a life of luxury, one in which they had never imagined before. If the sisters wanted something, they went out and bought it. This included building a huge Colombian mansion in New York. The home had 14 rooms, and many people felt that the house looked more like a castle than a home from the outside. They filled the bathrooms of the home with marble and chandeliers hung from the tall ceilings.

Along with the new home, the sisters bought a custom carriage, created from gold. Along with this, each sister had her furry companion, who would receive their custom-made clothing. Of course, once their home was complete, the sisters wanted to show it off. Therefore, they started to invite everyone they could think of and held grand parties and gala events. A personal hair maid became a part of the lives of the Sutherland sisters. Every night, the maid was paid to comb, untangle, and manage their hair of their charge.

However, tragedy would strike the family when the sister with the thickest hair, Naomi, died in 1893. Naomi died shortly after the sisters moved into their completed mansion. So, while she was able to see the complete work and live within its walls for a short time, she was never able to enjoy the life her sisters did. At the time of her death, Naomi was 40 years old. While the family was devastated, they did not wait long to start looking for a replacement for Naomi. The family held auditions and found a young girl named Anna Louise Roberts.

With their new addition, Anna, the girls continued to tour and sell their hair products. As the money kept rolling in, so did their luxurious lifestyle. Of course, like with many rags to riches Hollywood story, not everything was as well-rounded and fun as it seems. With their new home and parties came the trouble with drugs and alcohol. Throughout their lives, only one of the sisters, Victoria, married. She married around 1899, at the age of 50, to a 19-year-old. Unfortunately, in 1902, she would pass away.

The Negative Side Of Fame Becomes Everyday Life For The Sisters

Since none of the other sister’s married, they filled much of their adult lives with relationship triangles and troubles. The sisters would often swap men, whether because they wanted to or it completed in secret. On top of this, the sisters started to turn on each other. Whether this was because of jealousy among each other, their love triangles, drugs, alcohol, or just because they were always around each other; daily fighting eventually became a routine in their lives.

In the early 1900s, the sisters were still selling their products well. However, they were not making as many trips around the United States of America. On top of this, the daily lives of the sisters came out into the world and soon they were not considered to be wholesome Christians like they once were. After Victoria’s death in 1902, Mary started to show signs of more mental health problems. Soon, the other sisters could no longer care of Mary, and she could not care for herself, so she was placed in a mental asylum.

Some people speculate that Mary was placed in a mental asylum because the other sisters grew tired of her and did not want to deal with her at all. On top of this, Isabella passed away in 1914. The next sister to die, Sarah, went five years later. Not too long after Sarah’s death, the remaining sisters decided to make one last trip together to Hollywood. They wanted to go to California to try to tell their story. Sadly, during their journey, the girls were in a car accident, killing Dora.

The Later Lives Of The Remaining Sisters

During the 1920s, the flapper became popular. These ladies not only wore dresses that were considered a bit scandalous but also short hair. Fortunately, for the remaining sisters, their hair products did not completely die down. People could still see ads for the Sutherland Sisters hair products well into the 1920s. However, over the next decade, the ads became less and less, and soon there were none printed. After this, production on all the Sutherland sisters’ hair products ceased, and they soon became regular members of society again.

Tragedy would strike the remaining two sisters’ lives again when their grand mansion burned to the ground in 1938. Because the girls did not save or invest their money wisely, Grace had very little after the fire. Mary died in the asylum the following year, in 1939. Grace would go on to live until the age of 92. She passed away in 1946 with very little to her name and no family. After her death, Graces’ new home became an unmarked grave.

“Untangling the Tale of the Seven Sutherland Sisters and Their 37 Feet of Hair.” Lisa Hix, Collector’s Weekly. September 2013.