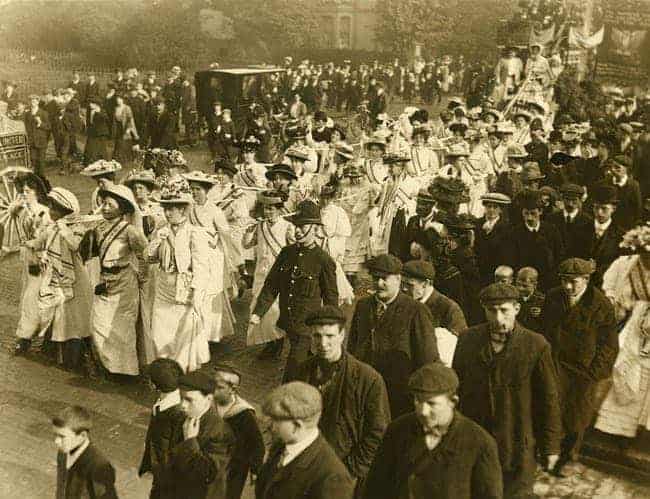 Thinking about suffragettes likely evokes images of women in the 1910s in white dresses peacefully holding signs with slogans like “Votes for Women.” However, suffragists in early 20th century England were anything but peaceful. Their tactics often included vandalism, public demonstrations, and hunger strikes, and they were frequently arrested. Due to brutal treatment at the hands of the police, the suffragists began to train in martial arts in order to defend themselves. They eventually came to call their style of martial arts “suffrajitsu” in a nod to the suffrage movement’s name.

England had a different and longer path to the women’s vote than the United States. English women were granted the right to vote in local council elections in the 1880s, but still lacked the national right to vote. To fight for this right, activist Emmeline Pankhurst founded The Women’s Social and Political Union (WSPU) in 1903. The WSPU was a women-only organization. She established a previous co-ed organization, the Women’s Franchise League (WFL) with her husband, Richard Pankhurst, a liberal lawyer who also fought for women’s right to vote. These two organizations used diverse tactics, including their newly acquired suffrajitsu, to fight for the right to vote.

The WSPU and Other Suffragist Organizations

In the late 19th Century, there were 17 officially recognized groups dedicated to achieving women’s suffrage. They came together under one umbrella organization: the National Union of Women’s Suffrage Societies, or NUWSS, in 1887 or 1888. The NUWSS was led by Millicent Fawcett starting in 1890. They were a non-violent organization that attempted to bring about suffrage through constitutional methods. Fawcett believed that any form of violent protest was counter-productive and preached a civil approach. As the 19th century came to a close, suffragists began to believe that a strictly non-violent constitutional approach was not working, which is where the WSPU steps in.

The slogan of Pankhurst’s WSPU was “Deeds Not Words.” She favored a more active approach to campaigning for suffrage. With a more direct approach, the WSPU women soon found themselves in conflict with citizens and police. They were finding themselves in increasingly dangerous situations. Plainclothes police officers often violently broke up their demonstrations. Over 100 suffragists were injured in a span of several months, with four ultimately dying from their injuries. The need for self-defense was becoming very clear to the women of the WSPU.

A new member of the WFL, Edith Garrud, ended up being the answer to the safety problems of the suffragists. Her teachings of Jiu-Jitsu, or “suffrajitsu” as it came to be known, not only provided self-defense for the women but also offered alibis for suffragists questioned by police about vandalism or public demonstrations. The widespread general trend of Jiu-Jitsu at the turn of the century even impacted popular culture, making it into literature and the news.

How the Suffragists Learned Jiu-Jitsu

Edith Garrud, nÃ©e Williams, met a wrestling and boxing instructor named William Garrud in 1892. They married in 1893, and she began training with him in physical arts. After moving to London, they witnessed a Jiu-Jitsu demonstration by E. W. Baron-Wright, who favored a form of Jiu-Jitsu he’d developed named Baritsu, after his surname. Baron-Wright’s martial art fascinated the Garrud’s, as it allowed a much smaller and physically weaker opponent to gain the upper hand in a physical confrontation using techniques meant to throw the larger person off balance. Edith was only 4’11” in height, so she was especially interested.

The Garrud’s took a class on the art from Baron-Wright and became competent in Bartitsu. Eventually, they became Baritsu instructors themselves and opened a gymnasium dedicated to teaching the art in London. It was at this gym that Edith began instructing suffragists in martial arts, sensing an opportunity to teach women the self-defense so needed for their safety while campaigning.

Garrud became involved with the WFL around the turn of the century by demonstrating self-defense movements and holds to suffragists. She also developed an athletic club for the women of the WFL. In 1908 she became involved with the WSPU and began organizing formal self-defense classes. It was around this time that their demonstrations became increasingly violent, leading Garrud to speak out in Health and Strength Magainze, saying:

“A woman who knows ju-jutsu, even though she may not be physically strong, even though she may not have even an umbrella or parasol, is not helpless. I will show you in a series of pictures how easily she may get the better of an assailant. I know many women personally who have tried the tricks I shall explain to you and come out on top. They have brought great burly cowards nearly twice their size to their feet and made them howl for mercy.”

While the formal classes provided structured self-defense training to the suffragists, their regular schedule provided another benefit to the activists: alibis. Women brought in for questioning by police for demonstrations or vandalism were able to use Garrud’s classes as an alibi, which would be supported by fellow suffragist’s. Garrud’s gymnasium was also occasionally used as a hide-out, as was the case when a half-dozen women who had smashed windows as part of a demonstration sheltered there.

Uses of Suffrajitsu and Its Effect on Popular Culture

As the suffragists gained steam throughout the early 1900s, they became increasingly targeted by police. Emmeline Parkhurst and her daughter were both arrested for disturbing the peace along with countless other suffragists. Parkhurst stated in her autobiography that 159 suffragists were imprisoned in 1909, 182 in 1911 and 288 in 1912. In 1913, 183 women were arrested. 1913 also saw the passage of The Cat and Mouse Act, which allowed suffragists who staged hunger strikes to be released until their health improved at which point they could be re-arrested. The suffragists used Jiu-Jitsu in an attempt to prevent this reincarceration.

Garrud used her Baritsu lessons to train a group of 30 suffragists known as “The Bodyguards” whose primary function was to protect hunger-striking suffragists from being re-arrested and reincarcerated. These bodyguards learned weapons training in addition to Jiu-Jitsu. The bodyguards also safeguarded Pankhurst during public appearances and speeches as she was a high-level target for the police.

As awareness of the suffragist movement continued to grow, the public also learned about the martial arts training of some of the suffragists. Garrud herself wrote and published a one-act play titled What Every Woman Ought To Know, or Ju-Jutsu as a Husband-Tamer: A Suffragette Play with a Moral. In the play, a wife uses Jiu-Jitsu to reject the violent advances of her husband repeatedly. While they reconcile in the end, the message of the story is clear: with Jiu-Jitsu women are capable of defending themselves against men.

The trained women began to be referred to as Amazons in the Victorian press, a reference to the mythical women warriors. Public opinion on the women was mixed, especially once the Amazon name began to stick. Garrud fought back against the name and argued that the women were merely defending themselves when needed, not training for sustained violence against police. Pankhurst took a more direct approach in an interview, stating:

“we have not yet made ourselves a match for the police, and we have got to do it. The police know jiu-jitsu. I advise you to learn jiu-jitsu. Women should practice it as well as men. Don’t come to meetings without sticks in future, men and women alike. It is worth while really striking. It is no use pretending. We have got to fight.”

It took a great deal of time, but the women were eventually successful gaining the full right to vote without any property or status restrictions in 1928. As an interesting aside, the Jiu-Jitsu fad of the early 20th century made it all the way to the pages of Sherlock Holmes. In 1903, Sir Arthur Conan Doyle referenced “Baritsu,” most likely a misspelling of Bartitsu, in the short story “The Adventure of the Empty House” published in The Return of Sherlock Holmes. He later used Baritsu to explain how Holmes avoided falling into the Reichenbach Falls when fighting Moriarity in “The Final Problem.” Ironically, Doyle was an anti-suffragist so one can only imagine what his feelings were on the later widespread use of suffrajitsu.