The Rise and Fall of the Body Snatchers 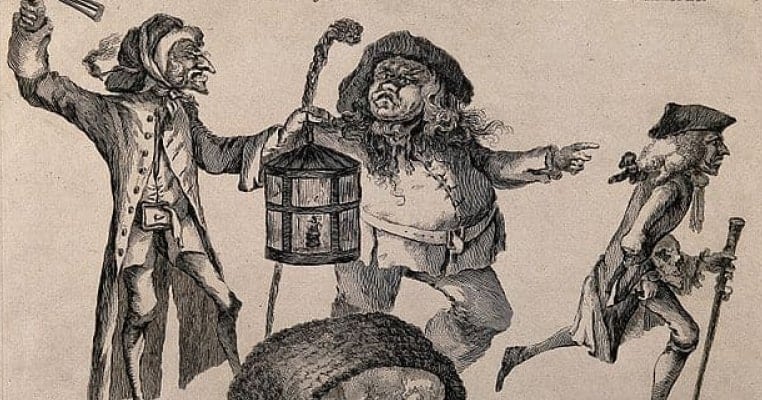 The Rise and Fall of the Body Snatchers

The advent of the Renaissance saw a growing interest in the workings of the human body. However, this was an interest that could only be satisfied by the dissection of human corpses. Initially, the practice was a social anathema. However, slowly the authorities came round to the idea and began to make the bodies of executed criminals available for dissection. In 1506, James IV of Scotland tentatively agreed that the Edinburgh Guild of Surgeons and barbers should have one executed felon a year. In 1540, Henry VIII followed suit, granting four executed criminals a year to medical research.

Finally, the 1751 Murder Act in Britain made it mandatory for the bodies of murderers to be dissected after death. However, by the eighteenth century, even this measure could not keep pace with the demands of medical science. The scarcity of criminal corpses grew even worse as transportation began to replace the gallows. So, to answer the requirements of the medical profession, a new kind of criminal arose. Known as the Resurrection Men or Body Snatchers, these eighteenth and nineteenth-century criminal gangs robbed graveyards of the newly deceased, selling them onto anatomist. Some would even steal the deceased from their deathbeds. However, others turned to murder- and so brought about the Resurrection Men’s fall.

The Rise of Resurrection Men

To understand the rise of the resurrection men, its necessary to know why, in times of such high mortality, there were so few corpses available for dissection. For few people, even the desperately poor would consider selling the bodies of their loved ones to medical schools. This was because most people still believed that to rise to eternal life on the Day of Judgment, a Christian needed an intact body. This belief was one of the reasons why the authorities had allowed the dissection of criminal corpses in the first place. For fear of dissection added an extra layer of punishment.

Many hardened criminals were much more affected by the prospect of dissection than the sentence of death itself. In 1831, The Newgate Calendar reported on the trial and execution of John Amy Bird Bell who was sentenced to hang for the murder of a 13-year-old boy. Despite his young age, Bell showed ‘the utmost indifference’ when the judge sentenced him to the gallows. However, he broke down when he learned that his corpse was destined for dissection.

Yet there were only so many criminals, and dead bodies only stayed ‘fresh’ for a limited time. So corpses for medical research were at a premium. As a result, doctors and surgeons were prepared to pay as much as ten guineas for a newly deceased corpse. So grateful were they for fresh subject matter that they were unlikely to question their suppliers too closely about the origin of the body. So it is unsurprising that in the eighteenth century, the illicit trade in dead bodies took off.

To quote Ambrose Bierce in “The Devils dictionary,” body snatchers supplied “the young physicians with that which the old physicians have supplied the undertaker.” These backgrounds of these suppliers of corpses were many and varied. They could be medical students, disreputable undertakers, con men who claimed the bodies of the poor from hospitals or workhouses- or the poor or desperate. For grave robbing was profitable- and relatively risk-free. For stealing a corpse was a misdemeanor under common law- not a felony as a deceased person had no legal standing, and a corpse belonged to no one. So as long as they just took the body and left behind clothes, jewelry, and other possessions, the resurrection men were safe.

However, while the authorities may have turned a blind eye to corpse snatching, grieving relatives did not. Many people held vigils, guarding the graves of their relatives until the corpse was no longer fresh enough to make it a target for the resurrection men. Others who could afford it employed ingenious measures to ensure their deceased loved ones were not disturbed. They would bury their dead in iron coffins or erect iron cages called mortsafes over the graves to protect them from the potential violation. However, the resurrection men had an ingenious way around this particular device. They would dig a tunnel some distance from the grave and so burrow into it.

Murderous Body Snatchers: Burke and Hare and the Bishop Gang

So, as long as they stuck to these rules, the worst any convicted a resurrection man could expect was a fine or a short spell in prison-a mere occupational hazard to any career criminal. However, by the 1820s, greed or desperation prompted some Body Snatchers to abandon the rules. When the supply of naturally deceased fresh cadavers dried up, some decided to create their own. These resurrection men turned to murder as a way of meeting the demand for corpses from anatomists and so continued turning a profit.

The most notorious of these body snatchers turned murderers were William Burke and William Hare. Burke and Hare were Irish laborers who migrated to Scotland for work. They met and became friends when they were living in the west Port region of Edinburgh. The pair turned to body snatching after one of Hare’s neighbors died, and the couple seized on the chance to sell the body.

However, they quickly graduated to murder. The pair would lure their victims into Hare’s lodging house and get them drunk. Once their victims passed out, the couple suffocated them using their own particular method which became known as ‘Burking”. Burking involved lying on the victim’s chest and covering their mouths and noses until they ceased to breath.

The authorities arrested Burke and Hare when a neighbor discovered a body under Burke’s bed. The authorities eventually found that the pair had murdered at least 17 people between 1827 and 1829. They had then sold their corpses to Dr. Robert Knox, a lecturer of anatomy in Edinburgh’s surgeons Square. Hare who turned King’s evidence helpfully supplied the full facts of the case. As a result, he escaped justice. Burke, however, shouldered all the guilt for the crimes. He was sentenced to hand on January 28, 1829. With supreme irony, he was also condemned to be dissected after his death. As for Dr. Knox, he escaped scot-free as there was no evidence to suggest that he knew he had received deliberately murdered corpses.

The case of Burke and Hare was not an isolated one. In London, a man called John Bishop ran a notorious resurrection gang for 12 years before he was discovered. The band, which besides Bishops consisted of James May, Thomas Williams, and Michael Shields, body-snatched around 1,000 corpses that they sold to anatomist at London’s medical institutions. However, they too eventually turned to murder. Amongst their victims were an Italian boy, Carlo Ferrari, three homeless people, and a woman, Frances Pigburn and her child

May, Williams, and Bishop were eventually arrested and brought to justice in 1831 when they attempted to sell the body of a fourteen-year-old cattle drover to King’s College. After getting the boy drunk, they tied a rope around his ankles and lowered him head first into a well where he drowned. All three men were found guilty. May escaped the gallows and was transported. However, 30,000 Londoners turned up to watch Williams and Bishop hang.

The Decline of the Body Snatchers

The murders carried out by Burke and Hare, and the Bishop gang caused widespread disgust and outrage. They were precisely the catalyst the authorities needed to act. In 1829, Henry Warburton put forward a parliamentary bill “for preventing the unlawful disinterment of Human Bodies and for regulating schools of anatomy.”Eminent surgeons such as Charles Bell, the future Professor of Surgery at Edinburgh University and Granville Sharp Pattison, a Glasgow anatomy lecturer, supported the bill. Both men endorsed a change in the law for the supply of corpses but also emphasized the difficulty anatomists had in obtaining bodies legally.

The result of the bill was the 1832 Anatomy Act. The new law was specifically designed to ensure a legal supply of subjects for dissection that were readily available to anatomists. Now, not only were the bodies of executed murderers to pass onto anatomists but also so to were those of the unclaimed poor from hospitals, prisons, and workhouses. Later, however, the law was refined, requiring family permission before any body could be taken and dissected. However, the effect was the same. It was no longer legal to simply hand over any corpse to the medical schools.

The Anatomy Act sounded the death knell for resurrection men around the world. Soon the need for go-betweens in the anatomy trade began to diminish as cadavers passed directly to strictly licensed anatomists from the relevant authorities. The practice of murdering and selling on bodies ceased as there was no longer any market for them. However, while the practice of robbing graves diminished significantly, the death of body snatching as a trade was a slow, drawn-out one. For the final blow to the body, snatchers was some fifty years away.

That final blow was the rise in the practice of embalming of corpses. The rich or eccentric had practiced embalming in England since the eighteenth century. However, by the 1880s, it had become a regular feature of the trade of ordinary undertakers in Britain and America. For embalming had become popular as it was a much more efficient way of preserving corpses than holding them on ice- especially if bodies needed to travel long distances before burial. However, the practice was even more useful to medical schools. For now, there was no need for a regular supply of fresh corpses for anatomical dissection as anatomists could keep a stock of preserved bodies on hand.

Where Do we get our stuff? Here are our sources?

The Rise of the Body Snatchers, History.co.uk

Capital Punishment and the Criminal Corpse in Scotland, 1740-1834, RE Bennett, Palgrave Macmillan, 2017