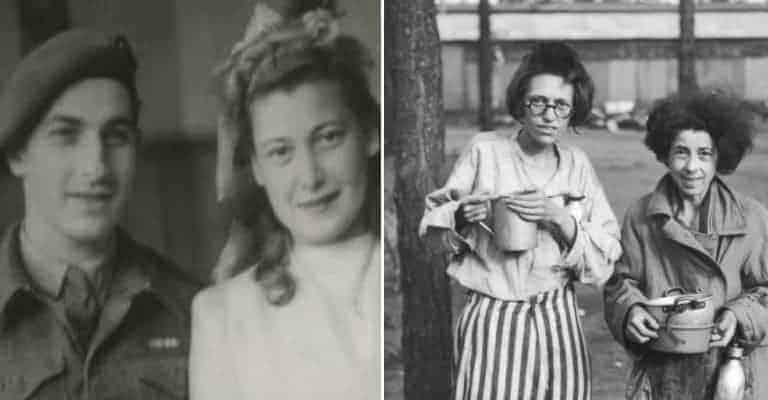 Auschwitz and Belsen: Life Against the Odds

At Auschwitz, Gena and her family were “dehumanized’, as their hair was shaved off and they were issued identical, loose vermin-ridden uniforms. Then they were forced to strip naked and forced into a room and told to wait. “We were trembling. I didn’t know where we were, “explained Gina. “We waited a while, and then water came through the walls. It was wonderful. For many weeks we had had no water on our backs. We were all drinking it.”

However, when Gena came outside, she realized the enormity of what had just happened. “As we came outside, the women there said how wonderful it was to see us. They screamed with happiness. I didn’t understand what they meant. I said ‘What are you shouting about?'” Recalled Gina, “They said ‘Don’t you know? You were in the gas chamber.’ It seemed that on this occasion, fate intervened and the mechanism for pumping the gas failed, earning the prisoners an unexpected reprieve.

During their short stay at Auschwitz, Gena and her mother lost Hela who was injected with petrol as part of Nazi “experiments” and died in the camp hospital. They could not even mourn her. “To cry in Auschwitz could have you shot…. We had to be strong, to block out everything, “said Gena. However, within a few weeks of the gas chamber incident, mother and daughter were on the move again, this time for a brief spell in Buchenwald concentration camp. Finally, as the allies began to advance in February 1945, they were moved for the last time: to Bergen Belsen.

Gena remembered her first impressions of Belsen clearly. “When I arrived in Bergen-Belsen concentration camp, I saw heaps of bodies lying around. Not just one or two but mountains as high as a tree in the garden. “You could not distinguish if they were men or women – bones, skeletons, children’s bodies. You can’t possibly imagine the state of the place; it was horrendous…Wherever we walked, we had to climb over piles of rotting bodies.”

Typhus was rife in the camp, and so Gena was assigned to the hospital to help nurse the sick. It was there that she encountered Anne Frank, whose secret diary would become one of the most touching testaments to the horrors of the Holocaust. “She was delirious, terrible, burning up. I gave her cold water to wash her down,” Gena recalled. “We did not know she was special, but she was a lovely girl. I can still see her lying there with her face, which was so red as she had a breakout. And then she died.” Gena and her mother, however, survived Belsen and where there when the British liberated the camp. “My courage came from my mother,” said Gena. “I was determined to keep her alive, and because of that, I lived.”

On April 15, 1945, the British Intelligence Corps entered Belsen. Amongst them was Norman Turgel, a young Sergeant with 53 Field Security Section who had been assigned the task of rounding up the camp’s SS Commanders. It was Norman who arrested the notorious commandant of Belsen, Josef Kramer who was known as “The Beast of Belsen.” As Norman was locking Kramer up, he had the satisfaction of letting him know that he was being imprisoned by a Jew.

The first sights that greeted Norman must have seemed out of hell. Over 20,000 naked corpses lay about the camp unburied, the victims of starvation, and disease. Other bodies lay alongside the corpses, dying. Norman later discovered some of the camp’s inmates had been reduced to cannibalism. However, soon afterward Norman saw a different sight. He met Gena when she was asked to show him around the camp hospital, and although she was emaciated and bedraggled, for Norman it was love at first sight. He knew immediately he would marry her.

A few days later, Norman invited Gena to the officer’s mess. To her surprise, the tables were covered in white cloths and flowers. “I asked Norman whether he was expecting any special visitors, ” recalled Gena, “He said ‘This is our engagement party'”. Gena admitted she was terrified of committing so soon but was won round by Norman’s persistence. Six months later, on October 7, 1945, the couple were married in a Jewish synagogue that had only survived the war because it had used as a cattle shed. The bride wore a dress made from a British silk parachute. It is now preserved in London’s Imperial War Museum.

The newlyweds returned to London with Gena’s mother and settled down. Gena and Norman became the proud parents of three children and grandparents to eight. However, for Gena, the pain of past events and the family she had lost remained buried inside. She wore a lot of perfume at all times as the stench of the camps never left her. Eventually, she decided that, as a survivor of so much horror and grief, she had to ensure that what had happened to her loved ones never happened to anyone else. So, in 1987, Gena Turgel wrote her account of her experiences “I Light a Candle.”

However, this was just the start. “Those people were real. They were mothers and fathers, uncles and aunts, doctors and teachers, poets, wonderful people. Composers. And now they scream in silence,” said Gena of all those the Nazis had murdered. So she became their voice and took her story into British schools to ensure that future generations would remain aware of the dangers of mindless prejudice and thus ensure that events like the holocaust never happen again. In 2000, Gena Turgel was awarded an MBE for her work in 2000. The indomitable spirit which had kept her alive kept her campaigning- right up until her death in June 2018.

From out of the Horror, A love story, Angela Lambert, The Independent, April 13, 1995