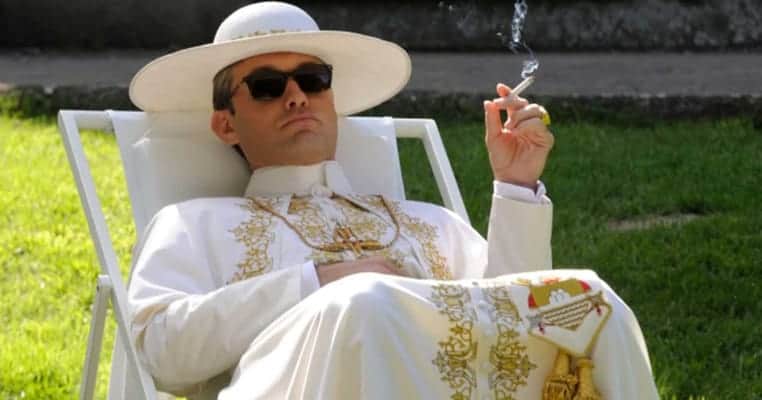 Over a thousand years before Jude Law played a scandalous pope in TV’s The Young Pope, history’s actual youngest Pope ever, John XII (937 – 964), presided over an even more scandalous real life papacy. History’s real Young Pope was elevated to the Holy See in 955 at age 17 or 18, and in what should have come as no surprise to anyone, it turned out that making a callow teenager pope was not a good idea. John XII’s years as Holy Father were as farcical and venal as one could expect from a person thrust into a position of power and influence for which he was clearly unprepared and unqualified.

The tenth century Rome of Pope John XII was somewhat of a semi-deserted Mad Max ghost town. The city held an estimated population of about 20,000 to 30,000 – a huge decline from its early Roman Empire peak of about a million to a million and a half inhabitants. It was still encircled by the remnants of the Aurelian Walls, that had been built in the 270s AD to a secure a city housing dozens times more people than it did in John XII’s days. Within that vastness, the relatively few tenth century Romans were like a few scattered peas rattling inside a huge pot.

Most inhabitants were concentrated along the Tiber, because the aqueducts that had supplied the city in its heyday had been cut, so the only sources of water were wells or the river. All other parts of the city, especially Rome’s iconic seven hills, were green areas occupied by farmers. The famous Forum Romanum, where the giants of Roman history had once rubbed shoulders, was now called Campo Vaccino (“Cow’s Field”). The Capitoline Hill, which had once housed the grand temple of Jupiter Optimus Maximus, was now Monte Caprino (“Goats Mount”).

The grand monuments of yesteryear had already been cannibalized for marble, columns, and bricks, while most of the city’s statues had been burned to transform their marble into lime. The destruction of Classical Rome was done not by marauding barbarians, but by the Romans themselves. Most inhabitants lived in ramshackle houses or huts, while the richer sorts lived in older Roman buildings, fortified and repurposed into strongholds.

The city and the surrounding region were the heart of the Papal States – a swath of territory in central Italy ruled directly by the popes. Interestingly, the Papal States came into being as a result of a huge swindle. Back in the eighth century, some monks forged a document recording a generous gift from emperor Constantine I, transferring authority over Rome and the entire Western Roman Empire to Pope Sylvester I. Such shenanigans were par for the course during a period of astonishing papal corruption and degeneracy, that came to be known as the “nadir of the papacy”.

Against that backdrop, the office of pope was nothing like what it would become in later years, or what it is today. Nowadays, the papacy is a prestigious institute, and popes are highly respected figures. In the days of John XII, however, popes were more like Rodney Dangerfield, and got no respect. And frankly, few of them did much that warranted respect in those days. Italy and Rome back then were in the throes of anarchy, rent by fiercely competing aristocratic families, warring with each other for dominance. The papacy was one of the most sought after prizes, and the rivals fought bitterly to seize the Holy See and make use of its spiritual, economic, and military resources in their quarrels. For them, the office of pope was just another piece and prize in their Medieval Italian version of Game of Thrones.

It was perhaps apt that John XII became history’s most scandalous pope, considering that scandal had attended him while he was still in the womb. Born Octavianus in 937, he was the product of an incestuous relationship between Rome’s most powerful figure, Alberic II, Duke of Spoleto, a self-styled “Prince of Rome”, and his stepsister. In 954, not long before his death, Alberic made Rome aristocrats swear an oath to appoint his son pope the next time the position became vacant. The promise was kept, and when Pope Agapetus II died in 955, Octavianus was duly elected to succeed him. He chose John XII as his regnal name.

The teenaged pope was wholly uninterested in his spiritual duties and papal obligations. By then, the only person who might have checked him, his father, Duke Alberic, had died. So this real life Young Pope suddenly found himself in a position of great power, and with access to great wealth and vast resources, without any adult guidance or supervision. He reacted like many teenagers would in similar circumstances, by diving headfirst into a life of depravity and the pursuit of pleasure. He was particularly devoted to hunting, gambling, wine, and women. He also had a habit, highly peculiar for a pope, of toasting the devil and invoking pagan gods while playing dice games.

As one historian put it, John XII’s pontificate: “became infamous for the alleged depravity and worldliness with which he conducted it“. Among other things, he started selling church offices and titles to help meet the mounting costs of his lavish spending, and on at least one occasion, he ordained a 10 year old as a bishop. He also refused to make the sign of the cross – seemingly a basic part of his job description. He had so little respect for the dignity of church offices, that he once ordained a deacon in a stable.

John XII got a particular kick out of defiling holy sites by having sex in them. He had sex with both women and men in his papal palace, and if visitors refused his advances, he just went ahead and raped them anyhow. His lust was seemingly insatiable, and he reportedly had sex with one of his deceased father’s mistresses, with his own niece, and with his two younger sisters as well.

Decline and Death of a Degenerate

John XII’s depravity did not preclude him from being a shrewd political operator. Indeed, he needed to be, in order to protect himself from the many enemies who cropped up in reaction to his misconduct and unfitness for office. Aware that his fate would be unenviable if he fell from power, and probably wishing to keep the party going, the Young Pope demonstrated he could intrigue with the best of them. His enemies sought the help of a king Berengar II of Italy, so the pope sent emissaries to king Otto I of Germany, with promises to make him emperor if he came to the Holy Father’s aid.

Otto duly invaded Italy in 961, and forced Berengar to back off. The German king then marched into Rome, and entered it in 962. There, he was welcomed by John XII, who crowned his rescuer as Holy Roman Emperor – the first in the west for nearly half a century. However, it did not take long before the Young Pope began chafing at the growing power and influence of his recently crowned emperor. He especially did not like it when Otto started giving him pointed advice about how he expected the Holy Father to behave.

Just before marching out of Rome to deal with Berengar, Otto informed John XII, who by then had “passed his whole life in vanity and adultery“, that he needed to straighten up, and start acting like a pope. That did not sit well with John, who had invited Otto into Italy to save him from his enemies, not to tell him how to live his life. So the Holy Father began intriguing against Otto. Within months of crowning him Holy Roman Emperor, John XII was corresponding with Otto’s enemies, seeking to form a league against the emperor.

The new Holy Roman Emperor got wind of the pope’s ingratitude, so he turned his armies around, and marched back to Rome. John XII fled the city, taking the papal treasury with him. So Otto summoned a synod, which deposed the fugitive Holy Father in 963, and installed a puppet pope in his place. However, when Otto left Rome the following year, John XII, at the head of an army of mercenaries, marched back into Rome, and captured the city in February of 964. He then summoned a synod of his own, which pronounced that his deposition had been illegal, and that he was still pope. The restored pope then proceeded to murder and mutilate as many of his enemies as he could lay his hands on.

When Otto heard the news, he prepared to return to Rome and finish the degenerate pope for good, but fate beat him to the punch. After a tumultuous and riotous nine years on the papal throne, this dissolute Holy Father finally died as he had lived, doing what he liked most: he met his Maker while having sex. There are two accounts of John XII’s demise. One account has him dying after suffering a massive stroke, mid coitus. Another account has him dying in the midst of an adulterous sexual encounter, when the woman’s cuckolded husband burst in on the couple and killed the pope by throwing him out of a high story window.