The Real Snow White Story Really Did Have a Talking Mirror 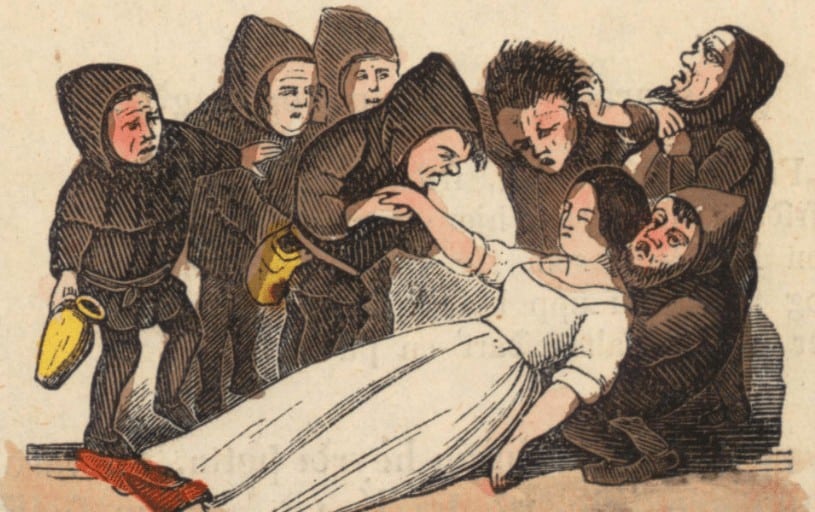 The Real Snow White Story Really Did Have a Talking Mirror

In 1812, The Brothers Grimm published the fairytale of Snow White and the Seven Dwarfs. It was later adapted into a Broadway play one hundred years later in 1912, and a Disney movie in the 1930’s. The general story stayed relatively the same throughout the years. A vain and evil Queen has a magic talking mirror. She checks in on a regular basis, just to make sure she is still the most beautiful person in the kingdom. As she is getting older, the Queen is losing her golden years of beauty, and her stepdaughter Snow White is growing up into a stunning young lady. When the mirror shows her that Snow White is the new hotness in town, the Queen is furious, and she sends her hitman huntsman after her. When the huntsman finds Snow White, he cannot bring himself to kill her, so he lets her go, and he tells her to run away. When she is hiding in the woods, Snow White finds a small cottage where seven dwarf miners live. She becomes their friend, and cleans their house in exchange for food and a place to sleep.

When the Queen learns that Snow White is still alive, she knows if she wants anything done right, she has to do it herself. She uses her magic to disguise herself as an old woman. While in her disguise, the Queen gives Snow White a poisoned apple, which makes her fall under a spell that makes her fall asleep. The seven dwarfs mourn over Snow White, and they put her in a glass coffin so they can keep looking at her whenever they want. One day, a prince named Philip is riding through the forest on a white horse, and he sees this girl in the glass coffin. He decides to kiss the dead princess, and the spell is broken. It’s true love at first sight, and they ride off into the sunset.

It turns out that the story of Snow White matches up with the real-life stories of two different young women in Germany, and they were clearly the inspiration for the fairy tale. Both stories have several things in common- Beautiful young princesses, evil stepmothers, poisoned apples, and princes named Philip. Since the Grimm Brothers were gathering stories that had been passed down by word-of-mouth, it’s easy to see how elements from both of theses stories were blended together to form one fairy tale.

Born in 1533, Margaretha von Waldeck was the daughter of a German aristocrat named Philip IV. He was the Count of Waldeck, so that made him nearly royalty. Margaretha’s mother died when she was very young, and her father married his second wife, a woman named Claudia Elisabeth Maria von Venningen, who was the Countess of Reichenstein. Just like the fairy tale, Countess Claudia was very vain, and she did not like her stepchildren at all. She may have even been the beginning of the “evil stepmother” stereotype.

When Margaretha was 12 years old, she was already growing into a beautiful young woman. She had blonde hair and blues eyes. She had two other sisters, but her father decided that she was the prettiest- and therefore, the most useful. He sent Margaretha on a journey through an area called “The Seven Hills” in the Netherlands to live at a beautiful estate called Valkenburg Castle. Her biological uncle on her mother’s side, Johann Cirksena, lived there with dozens of people in his royal court. According to the story, her father, Count Waldeck, had fallen out of favor with Johann Cirksena after the death of his first wife, and there was a lot of political tension between Germany and the Netherlands. He thought that by sending his daughter Margaretha to live in his royal court, maybe she would grow up to marry one of the aristocrats in the Netherlands. This could have been the answer to repairing the political relationship between the two countries. A Germany man named Philip I, the Landgrave of Hesse, had been imprisoned in The Netherlands for being a Protestant leader in a Catholic country, as well. Germany wanted this prisoner back. Margaretha was being used like a possession that could be bartered with.

Since Margaretha was so beautiful, men in her uncle’s royal court fought over who would get to marry her. A man named Lamoral, the Count of Egmont, was the leader of the Netherland’s territory in Spain. He was the most insistent on courting and marrying her, but her stepmother disapproved. Her parents claimed that the issue was the fact that she was baptized as a Lutheran, and Lamoral was Catholic. However, nearly everyone in the Netherlands was Catholic at that time, so it was a poor excuse. Her father probably wanted to hold out for a husband who had political connections in the main land of the Netherlands. If his daughter moved to Spain with Lamoral, he could not use her for his political agenda.

After living in the Netherlands for years as a trophy standing in the middle of a political and religious debate, Margaretha was still not married at 21 years old. She was far from being an old maid, but 9 years had passed since she lived in the Netherlands, and yet her father’s goals were not accomplished. For a year, her health was slowly declining. She was fed healthy things, and yet she still continued to fade. When she died, doctors believed that she had been poisoned. There is no evidence to suggest that her stepmother was ever involved with the poisoning. However, one could argue that Margaretha’s parents were at least partially responsible for her death. They knowingly used their daughter as a chess piece in a political game, and rejected the potential suitor that was willing to marry and protect her.

Around that same time, an evil old man in the area was caught giving apples laced with poisonous nightshade to children. While there is no evidence that Margaretha ate one of those poisoned apples, the correlation between her death-by-poison and this string of murders is clearly what inspired the Grimm Brothers version of the story.

So…Where do the seven dwarfs come in? Margaretha’s father owned a copper mine, and he used child labor. The small house with the row of beds that we see in the fairy tale story is almost identical to the little cottages where the child miners would live. Many of these children were not born as dwarfs, but their lack of nutrition and the daily grind of climbing in and out of tight spaces stunted their growth to the point where they were called “dwarfs”. Unfortunately, the children could not come to Snow White’s aid.

The second inspiration for Snow White came from Maria Sophia von Erthal, born in 1729. Her father was Prince Philipp Christoph von Erthal, which made her a proper princess. She lived in Lohr, Germany, which was famous for making glass, and there was an abundance of poisonous nightshade plants growing in the forest. While there is far less information out there about Maria’s story, there is one key element to her life that carried over to the Snow White story- the magic mirror. 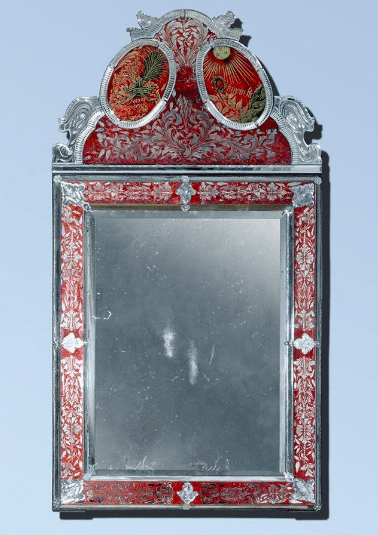 Maria also had a beautiful stepmother who treated her stepchildren very badly. One of her favorite things to do was play with a custom magic mirror she received as a gift from Prince Philip, because it spoke to her, telling her what she wanted to hear.

Okay, so it wasn’t real magic. But for people in the 1700’s who had no idea how it worked, it may as well have been magical. It was a trick mirror that reverberated back the voice of the person who spoke into it. This seems like pretty advanced technology for back in the 1700’s, but it is very real. As you might imagine, The Countess could look in the mirror, and say, “You look beautiful today”, and the mirror would echo it back, fueling her self-indulgent nature. On the left side of the mirror, the words “amour propre”, meaning “self love” were etched there. The mirror still exists today the Spessart Museum, and visitors can test out the mirror for themselves.

Maria was never poisoned, and she got to live out a full and healthy life. However, there is an insinuation that her stepmother was young- possibly close to her daughter in age- and that there was an awkward rivalry going on between the two of them.

In the original Grimm Brothers fairy tale, Snow White is described as being blonde, which matches the existing image of Margaretha von Waldeck. Since the illustration of Margaretha was so small, there is little else to go on, besides written records of her beauty. Maria Sophia von Erthal, on the other hand, had a very detailed painting of her commissioned, so it was easy to see how she could be “the fairest one of all”. She had dark hair and light skin, so she is the physical inspiration for Snow White in the Disney movie.

Even though their stories are two hundred years apart, Maria also has connections to the “dwarfs” living in the mines of The Seven Hills. In a town called Bieber, just west of the Lohr the mines were so tiny, it was not even an option to send adults in there to work. Every single miner wore a brightly colored cap, because of there was a cave-in, they helped the bright fabric would make their bodies easy to find. This morbid little detail was kept in the Disney version of the story, where we see each of the Seven Dwarfs wearing a cap. Of course, it is far less depressing to have adult dwarfs working the mines, instead of children. Together, the lives of these two young women molded into the story of Snow White that we all know and love today, and the true stories have been nearly forgotten.