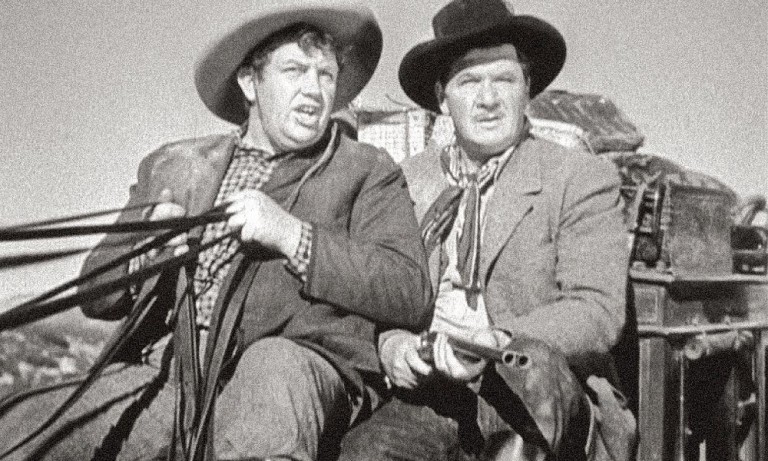 Words and phrases have a beginning to their story just like anything else in history. Today, the meaning of the statement “riding shotgun” is to ride in the passenger seat of someone’s vehicle. However, the second meaning to “riding shotgun” is traveling as an armed guard beside the driver. When it comes to the origin of the phrase “riding shotgun” it is the second meaning that more closely ties in with its origin. Furthermore, the origin dates back to the days of the wild west. One of its earliest newspaper references occurred in the May 1919 issue of The Ogden Examiner. This Utah newspaper stated in an article titled, “Ross Will Again Ride Shotgun on Old Stage Coach.”

The wild west is called such for an obvious reason: the west was wild. During the days of covered wagons, pioneers were busy establishing new states, cities, and homes in the west. However, the land was not unoccupied. Before settlers began moving in, Native Americans had settled in many areas. Nevertheless, the biggest dangers of the wild west come from a lack of enforced laws, thieves, and other criminals. Because of these circumstances, many pioneers felt they needed extra protection on their journey. Therefore, two people would sit at the front end of the wagon. One person would be controlling the horses, and the other would be holding a shotgun.

Of course, it was not only newspaper articles which used the phrase “riding shotgun.” There are also several references of the words in Hollywood’s western movies. One such film was titled Stagecoach, starring John Wayne, which was released in 1939. In several scenes, the character Marshal Curly Wilcox, who is portrayed by George Bancroft, can be seen riding shotgun in order to protect the items they hold in the stagecoach. It is interesting to note that not all stagecoaches would have shotgun passengers. There was only a passenger in the shotgun seat if the stagecoach was carrying items, such as bullion. If there was no shotgun rider, the stagecoach would be carrying regular passengers.

Another Hollywood western movie which uses the original version of the phrase “riding shotgun” is Ray Taylor’s 1942 classic, Stagecoach Buckaroo. This movie stars Johnny Mack Brown, Anne Nagel, Herbert Rawlinson, Nell O’Day, and Fuzzy Knight. In this movie, Johnny Mack Brown portrays a character named Steve Hardin, who gets a job as a stagecoach guard, which was another name for the phrase, “riding shotgun” as the shotgun rider was often known as the guard of the stagecoach.

Maybe one of the greatest western movies that show a passenger turned into a gunman is the movie titled merely Riding Shotgun. This 1954 movie, which was directed by André De Toth, features actor Randolph Scott, who plays Larry Delong, a shotgun rider. This movie, while it is made for Hollywood and not real life, focuses on the life of Delong, who was given the job to guard the stagecoach, which was heading for a place called Deepwater.

Unfortunately, Delong is tricked out of his post as a guard, and the stagecoach gets robbed. He is then believed to be part of the gang that robbed the stagecoach and has to try to prove to people that he was not affiliated with the group.

However, it was not just western movies that brought out the phrase “riding shotgun” into popular fiction. One of the earliest popular fiction mentions of the phrase occurred in 1921. A March 27 issue of the Washington Post published a fictional story titled, The Fighting Fool, which was written by Dane Coolidge. In the story, a character named McMonagle told another character named Benson, “…He is ridin’ shotgun for Wells Fargo…”

Changing of the Phrase Throughout History

If it was not for popular culture using the phrase “riding shotgun,” it probably would have gone away like so many other phrases over time. However, it was also popular culture which helped change the meaning of the phrase. When the phrase was first used with stagecoaches, it was rarely ever written about in print to actually document. People just knew the individual in the passenger seat was the shotgun rider. For instance, the Wells Fargo & Co had a stagecoach service, which generally carried bullion. The company would give their shotgun rider, also known as a shotgun messenger, a “coach gun.” This gun was a double-barreled 10 or 12-gauge short shotgun.

Once Hollywood caught onto the phrase “riding shotgun” it seemed that nearly every wild west type movie would have it somewhere in their script. By the 1950s, the phrase had become so popular in western movies that teenagers took it upon themselves and began using the phrase. However, instead of carrying a shotgun as they would in the stagecoach, the teenagers turned the phrase what would become a popular game around the United States.

Like any game, there are some rules when playing the “calling shotgun” game. However, the main rule is that the first person to yell the word “shotgun” when getting into a car with a few friends or brothers and sisters, gets to ride in the passenger seat of the vehicle. However, there are other rules for if there is a tie on who said the word “shotgun” first or if you are riding with your parents or a couple who is romantically linked. Also, unlike riding shotgun in the stagecoach, the shotgun rider who wins through playing the game does not carry a gun for protection.

Up until the United States September 11, 2001, terrorist attacks, the phrase “riding shotgun” was used as a game. Unfortunately, the terrorist attacks once again started to change the meaning of the phrase. In order to try to protect the staff and passengers on the airlines better, they started to employ air marshals. These air marshals are often told they are “riding shotgun.” However, unlike the original shotgun riders who were employed to protect the stagecoach, the air marshals do not carry shotguns.

While we have mainly been focusing on popular culture for our riding shotgun stories, there is one famous nonfiction story that details a shotgun messenger. This setting for this story is in Tombstone, Arizona on March 15, 1881. On this night, there was a Kinnear & Company stagecoach which was hauling about $26,000 silver bullion, which would be about $659,234 today. The stagecoach was heading from Tombstone to Benson, Arizona. The shotgun messenger on this stagecoach was named Bob Paul, who had lost in the election for sheriff earlier.

However, because the driver, Budd Philpot, of the stagecoach had fallen ill on the trip, Paul had switched places with him. Once they were outside of Contention City, they encountered a male on the road, who was forcing them to stop. Then, three other men came out and attempted to rob the stagecoach. Bob Paul took his gun and shot at the men from the driver’s seat. Throughout the fight, Paul had emptied his gun. At the end of the encounter, one of the men, Bill Leonard, was injured. Both Philpot and the passenger of the stagecoach, Peter Roerig were killed in the shooting.

Of course, during the shooting, the horses got scared, and it took Paul a little over a mile before he could gain control of the team again. The robbers were not able to win any of the bullion as when the horses got scared, they ran off and the robbers were not able to catch up to the stagecoach. After everything, Paul was quoted saying that he believed the first shot fired, which was the shot that killed Philpot, was meant for him.

“The meaning and origin of the expression: Riding shotgun.” Gary Martin, The Phrase Finder. 2018.