The Mysterious Antikythera Mechanism is the World's Oldest Known Computer

The Mysterious Antikythera Mechanism is the World’s Oldest Known Computer 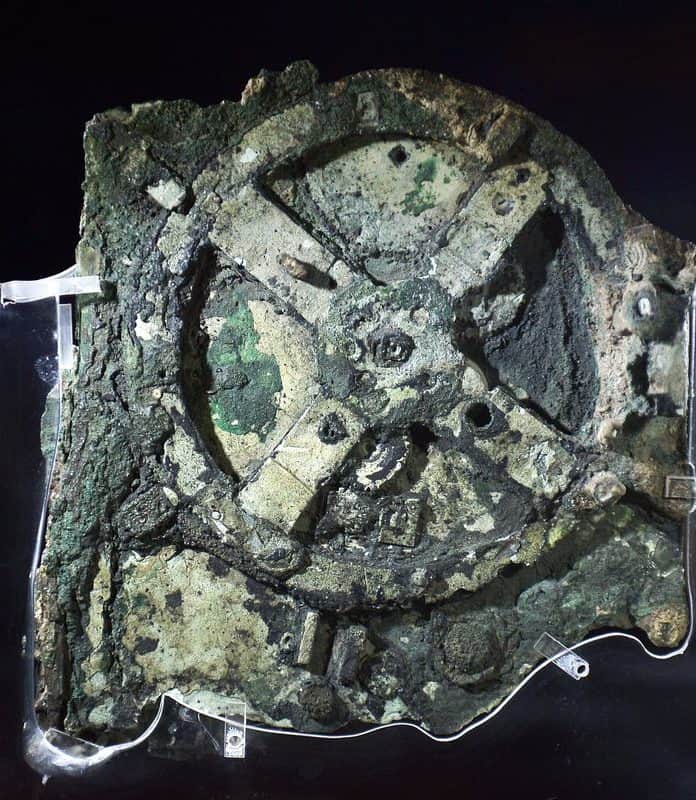 In the ancient and classical eras, the Mediterranean Sea was not much of a barrier between the lands bordering its shores. Instead, it was more of a convenient watery highway, facilitating seaborne trade and exchanges between the Mediterranean’s peoples. In the eastern part of that sea is the small island of Antikythera, between the Peloponnesus and Crete. It lies roughly halfway along the sea lanes used by ships plying the waters between Asia Minor and Italy. In antiquity as well as now, Antikythera’s jagged coastline was a hazard to ships, that could easily be dashed to destruction on its unforgiving rocks.

Such destruction was the fate of an unfortunate ship, presumably Roman, that was sailing to the western Mediterranean sometime around 65 BC. That year the ship and its cargo of commercial goods, including luxury items, sank off the island. The wreck lay forgotten at the sea bottom until 1900. In the spring of that year, fishermen diving for sponges off Antikythera, spotted a bronze hand sticking out of the sediment, at a depth of about 150 feet. They informed Greek officials, who then directed a search around what was identified as a sunken ship. It came to be known as the Antikythera Wreck.

In 1901, divers working the wreck recovered marble and bronze statues, coins, jewelry, glass artifacts, and over 200 amphorae, some of them intact. They also brought up some finely worked vases, other high end goods, and some of the era’s most prized works of art. Among the objects recovered was a wooden box 13.4 inches high, 7.1 inches wide, and 3.4 inches in depth. Inside the box was a severely corroded lump of bronze, that began disintegrating as soon as it was removed from the water. All items from the Antikythera Wreck were taken to a museum in Athens. There, the wooden box and its contents were initially ignored, while archaeologists focused on restoring the more identifiable treasures, such as the statues, jewels, and coins.

A year later, however, an archaeologist named Valerios Stais took a closer look at the wooden box’s contents, and was surprised to discover what he identified as a gear. Further examination was conducted into the corroded lump of bronze, which initially consisted of 4 main lump fragments. As researchers painstakingly cleared the corrosion and encrustation, the 4 main lumps became 82 distinct pieces, including many more gears. All in all, the box contained about 30 meshing bronze gears, the largest of which measured about 5.5 inches in diameter, and had 223 teeth.

Working together, the box’s contents amounted to a complex clockwork mechanism, and Valerios Stais figured it must have been some kind of astronomical calculation device. However, most scholars at the time reasoned that the device, which came to be known as the Antikythera Mechanism, was too complex to have been manufactured in the 1st century BC. Instead, they concluded that it must have been made centuries later, then been lost at sea, and came to rest by mere coincidence atop the earlier debris of the Antikythera Wreck.

As a result, further research into the Antikythera Mechanism was abandoned for decades. It did not resume until the 1950s, when Derek John de Solla Price, a Yale professor who specialized in the history science, took an interest in the device. Over the next two decades, he conducted intensive research into the mechanism, including the use of gamma-rays and x-rays, before publishing a 70 page paper on his findings in 1974. In it, professor Price demonstrated that the device did, indeed, date to the 1st century BC, and as Valerios Stais had guessed seven decades earlier, the mechanism was an astronomical clock.

After carefully examining the gears, professor Price figured out that the device had been used to predict where the planets and stars would be positioned in the sky, on any given calendar month. It worked by moving the biggest gear, which represented the calendar year. That gear, in turn, would move other, smaller gears, that represented the motions of the sun, the moon, plus those of several planets.