The Role of Fool was a Staple in Medieval Culture... In Some of the Most Unexpected Ways 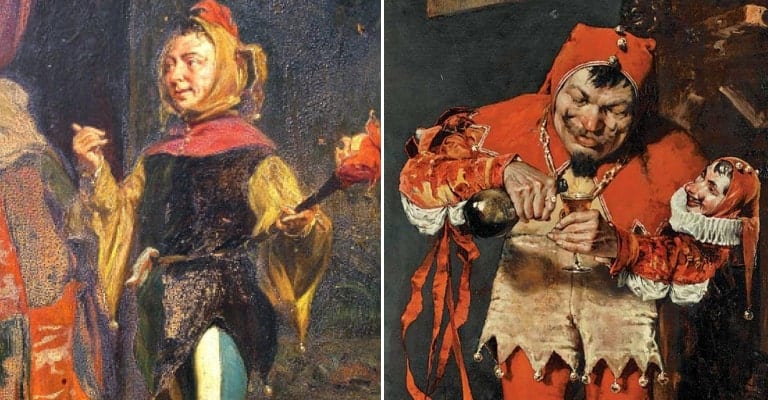 Court jesters conjure images of medieval feasts, where the fool, brightly dressed and belled, would entertain his Lords guests with mockery, mimicry, and jests. The role of the Fool, however, predates the medieval period. The Egyptians Pharaohs enjoyed being entertained by their fools as much as their later counterparts in Europe. Even the Romans loved a Fool, especially the “farting jesters” who, according to St Augustine could “produce at will such musical sounds from their behind (without any stink) that they seemed to be singing from that region.”

If the tradition of the fool was an ancient one, it was also much more varied than we imagine. For the role of the Fool was about much more than telling jokes and entertaining the aristocracy. For although many fools were mentally or physically disabled, others were highly trained, skilled individuals who acted as popular entertainers at carnivals and fair. Then there were the wise fools with a broader role, the councilors, and comforters whose advice even Kings would heed. These fools often acted as political go-betweens- even going into battle.

By the 11thand 12th centuries, medieval Fools fell into the general category of Minstrels or ‘Little Servants. The term covered a whole range of entertainers besides jesters, including acrobats, musicians, and singers. However, “little servant’was an appropriate term for the household fools. For jesters were expected to perform a much broader role in the household than keeping people amused.

Noblemen did not entertain every night and certainly did not want the repetition of listening to the same entertainer, telling the same jokes. So when they were not performing, Fools would be found other work about the household. They might be put in charge of the care of their Lord’s hounds or work in the kitchens. They could also be sent to the market to buy goods for the household.

Highly trained medieval jongleurs may have felt such tasks to be beneath them. However, other fools would have been more than grateful to be of any use at all. For many noble families often adopted as their fools men and women marked by mental or physical disabilities. These ‘innocent fools’ were kept almost as pets under the guise of so-called Christian charity. Their masters provided them with food, clothing and a place to sleep in return for being a curiosity about the court. However, if their Lord decided they were no longer an asset to the household, they would be cast out. The lucky ones might receive a small pension. However, most were left to beg.

Some fools, however, performed much darker duties than a bit of housework. Thomas Skelton was the last professional fool at Muncaster Castle, near Ravenglass in Cumbria. Skelton was in the service of the Pennington family who had owned the castle for eight hundred years and was believed to have been the model for the royal jester in Shakespeare’s King Lear. However, legend tells that Skelton was also an assassin. For Helwise, the unmarried daughter of Sir Alan Pennington had taken Dick, a carpenter’s son and one of the servants at the castle as a lover. When one of Helwise’s other suitors, a local Knight, discovered the affair, he enlisted Skelton to take his revenge.

The knight asked Skelton to behead Dick with his own ax while he slept- and the jester was more than happy to oblige as he believed the young man had stolen money from him. In the aftermath, he bragged about his crime. “I have hid Dick’s head under a heap of shavings, ” he told the other servants. “And he will not find that so easily when he awakes as he did my shillings.”

However, if a fool was lucky enough to be employed by a royal household, they could find that their extracurricular duties were far more significant. Royal Fools were the only ones in the court who could openly mock the monarch- and keep their heads. Will Somer’s, the ‘King’s Fool’ of Henry VIII is just one example. In 1535, Will dared to make a mockery of the King’s then-wife, Anne Boleyn by calling her a ‘ribald’ or a sexually immoral woman- and the King’s daughter Elizabeth a bastard. Henry was so angry that he threatened to kill Will with his own hands. However, Henry soon forgave him.

Fools like Will Somers had such license because they made themselves useful in other ways. For often, they were anything but ‘fools’ and instead were astute, intelligent individuals who acted as unofficial councilors and confidants. Somers was particularly noted for his integrity and discretion. He would use his wit to draw Henry’s attention to matters that the King would otherwise have missed. Thomas Cromwell, Henry’s chief minister, is said to have used him in this way to influence the king on various matters. Likewise, Yu Sze or Twisty Pole, the court jester of Emperor Qin Shi Huang dissuaded his master form the crazy notion of lacquering the entire great wall of China- thus saving thousands of lives.

Some fools were also useful in helping their monarchs mend their ways. George Buchanan was the jester of King James VI of Scotland. James had a bad habit of signing official documents without reading them, which was causing severe problems in the government of Scotland. So George decided to teach him a lesson. One day, he took a document to James and true to form the King signed without reading- only to discover 15 days later that by doing so he had abdicated the rule of Scotland – and made his fool King in his stead. The loyal fool discretely pointed out the error, and from then onwards, James read always read documents before he signed.

But at the end of the day, Royal Fools could also be friends and comforters. In Henry VIII’s declining years, Will Somers was said to be the only person who could make him smile when he was in pain with his ulcerated leg. He was also one of the few people the King truly trusted and confided in. Will served henry loyally until his death. However, other royal fools retired and made a fortune. One Fool, Robert le Pettour was granted 30 acres of land on his retirement by Henry II- on the condition that he returned to court every Christmas day to “leap, whistle and fart.”

The Fools most extraordinary role, however, was their occasional use in war. It was a common sight when two armies were preparing for battle to see the jesters of the opposing leaders cavorting on foot or riding in front of the troops. These brave Fools would tell jokes and mock the enemy to raise their own army’s spirits- or provoke the enemy into a premature attack. For Fools had a psychological role in warfare. The night before a battle, they even acted as early wartime entertainers, diverting the soldier’s minds with songs and stories.

However, the Fools were not just battlefield buffoons. For quite often, the leaders of armies would use their jesters to convey messages to the opposing side. Fools were used to carry the terms of surrender – or to deliver the conditions for the release of hostages. This role was a dangerous one. For although traditionally, messengers were sacred and therefore not to be harmed, it was not unusual for disgruntled war leaders to literally ‘shoot the messenger’ – right back at their army.

Any Fool unfortunate enough to carry a message that displeased the recipient could find themselves loaded into a trebuchet or catapult and shot back into their army by way of reply. If they were lucky, the enemy would have killed the fool beforehand, with only their severed head acting as a reply. However, if a war leader was particularly truculent, it was the intact and living fool who made his way, airborne, back across the battlefield.

However, Fools on the battlefield did not just fly or frolic. Some of them joined in the fighting. One was William the Conqueror’s jester, a dwarf named Taillefer who played a crucial part in the Battle of Hastings. By the middle of the battle, the Norman’s were flagging and in danger of being defeated. Suddenly, Taillefer rode out in front of them and ‘tossing his sword high; he sported with it.”This battlefield-juggling act drew one of the soldiers out of the English’s defensive shield wall.

Taillefer immediately stopped cavorting, turned on the soldier and decapitated him. Then, he turned his horse towards the English lines and charged them. Taillefer was killed in Battle. However, his courageous fooling about acted as just the spur his side needed. Taking heart from his example, the Normans rallied, winning the battle and William his crown. On that day in 1066, one Fools antics changed the course of history proving that medieval jesters weren’t such a joking matter after all.

What was life like for a court jester? Karen Maitland, History Extra, March 7, 2017

10 facts about the Battle of Hastings, Sally Coffey, Britain