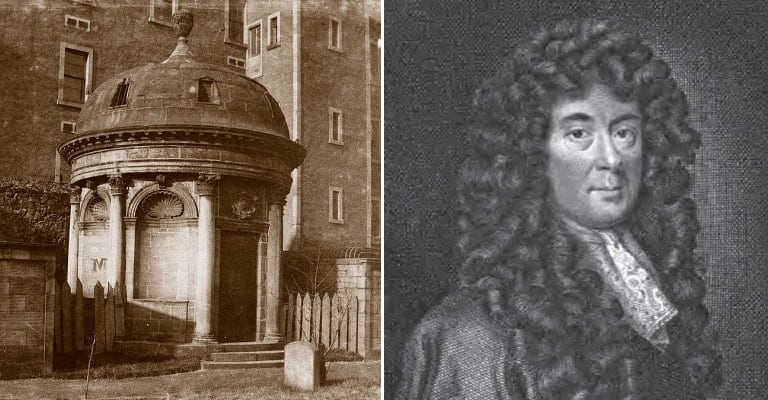 The Black Mausoleum long had a reputation for being haunted. Cassell’s Old and New Edinburgh records show local children in the nineteenth century believed that MacKenzie could never rest in his grave. Those brave enough would enter the graveyard at night and approach the tomb. Then they would shout through its keyhole:

“Bluidy Mackenzie, come out if ye daur, Lift the Sneck and draw the bar!”

It seems that if he was indeed lying restless in his tomb that was just where Bluidy Mackenzie was happy to stay. Until one late night in 1998 changed everything.

It was a night of heavy rain, and a local homeless man was looking for a dry place to sleep. Driven by desperation, he found himself outside the Black Mausoleum. The tomb was locked as usual. However, the man decided to explore- and found a drainage hole or ventilation point at the back that he was able to squeeze through. Once inside, the man made his way down into the tomb’s crypt where he found the coffins of George Mackenzie and his family.

Wondering if there was something inside one of the coffins he could use or sell, the desperate man began to prize one open. However, he lost his balance and part of the floor gave way beneath him- plunging him into an earlier burial pit full of moldering skeletons. Hysterical with shock and terror, the homeless man fled the scene, frightening a local dog walker into the bargain with his sudden exit from the tomb. Just one week later, the disturbances around the Black Mausoleum began.

The first victim was a casual female visitor who stopped to look at the Black Mausoleum. Suddenly she felt “blasted back by a cold force.” Before long, other visitors were reporting similar incidents. Some fainted inexplicably or suddenly felt ill or experienced a sense of great unease. Others came away with marks of bites and scratches- even bruises around their faces and necks after feeling a ‘touch’ in the afflicted area. In all, there have been 500-recorded incidents of the poltergeist’s attacks around the area of the Black Mausoleum and the nearby Covenanters prison.

The poltergeist’s activity has even spread, wiping out the home and possessions of one researcher into the phenomenon whose flat backed onto Greyfriars Cemetery just behind the tomb. Many people believe that the Poltergeist is the revived spirit of Judge Mackenzie, roused from an uneasy rest by the desecration of his grave. Others think the activity is a manifestation of hysterical energy, triggered by that night in 1998 and fed by subsequent visitors. Whatever its cause, the Mackenzie poltergeist has undoubtedly put Greyfriars on the ghost seekers map of Edinburgh- and kept the tragic history of the Covenanters and George Mackenzie in the public eye.

Who were the Covenanters? Scottish Covenanters Memorials Association.

Did You Know? – Covenanters, Rampant Scotland

The Ghost that Haunted Itself, Jan-Andrew Henderson, Mainstream Publishing 2001