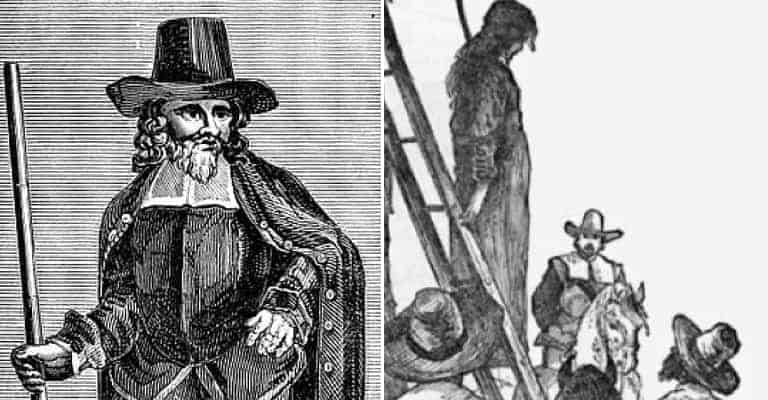 With Stearne as his second in command and Goody Phillips assisting, Hopkins began to tour around southeast England, offering his witch finding services in towns and villages. War-ravaged England was a perfect breeding ground for hysterical accusations of witchcraft, so Hopkins had plenty of takers. Hopkins’s method was to invite locals to begin the accusations- then he took it from there, uncovering yet more witches. By 1645, Hopkins’s had revealed 117 witches in Sudbury alone and a further 40 in Norfolk. By now, he felt successful enough to assume the title by which he was best known: The Witch Finder General.

Torture was illegal in England, so Hopkins had to be subtle. Suspected witches were handed over to Goody Phillips who, along with a group of locally appointed searchers, would strip their unfortunate victim and search her for witch’s marks. Any marks were then ‘pricked’ to test them as devil’s marks. The searchers were also responsible for watching the suspect closely, often for days. This measure was to see if a familiar would approach the witch to feed by suckling on her witch’s teat. However, it was also a way of breaking the suspect down. For during this time, the suspect Witch would also be starved and deprived of sleep- to make her more susceptible to confession.

Hopkins also used other method’s to extract confessions. He would often bind his victim cross-legged on a table or stool and leave them in this position without respite for 24 hours. Or he would force them to continually walk while barefoot, about their cell until their feet blistered and they were broken by exhaustion. However, Hopkins’s favorite method of testing potential witches was ‘swimming.’ The suspect would be bound and lowered into a body of water on ropes and then left literally to ‘sink or swim.’ If they sank, they were innocent. However, to float was a sign of their guilt.

Most of Hopkins’s victims were women like Elizabeth Clarke: old, alone and unfortunate. However, a few dissenting clergymen were implicated. One, in the summer of 1645, was the minister of Brandeston in Suffolk, John Lowes The Reverend Lowes was a gentleman of seventy years old but quarrelsome and not much liked by his parishioners. Initially, Lowes denied his guilt with great indignation. So Hopkins tortured him until he confessed, by keeping “him awake several nights together while running him backwards and forwards about his cell until out of breath.” After a brief rest, the ‘exercise ‘ began again and continued “for several days and nights together, till he was weary of his life and scarce sensible of what he said or did.”

Witch finding was a profitable business for Hopkins and his team. The Witch Finder general charged each town twenty shillings for cleansing it of witches. Sometimes it was much more. Stowmarket in Suffolk must have had a particular problem as the town paid Hopkins the vast sum of £23. Its neighbor, the town of Aldeburgh escaped with a somewhat lighter bill of £6. These sums were a fortune compared to the average wages of the day, and it has been estimated that in all, Hopkins’s received fees of around £1000 for his witch-finding.

The End of Matthew Hopkins

If Hopkins hoped to use his ill-gotten fortune to propel him onto greater heights, he was mistaken. For the tide was beginning to turn against the Witch Finder General. People began to tire of the witch craze as it hit their own pockets. More and more towns were levying taxes specifically to pay the witchfinder- and the citizens resented it. People began to grumble that money was Hopkins’s primary motive for his witch-finding. Hopkins hotly denied this claim, explaining he only ever visited towns that invited him. Any funds received were to cover his expenses- or voluntary donations out of thanks. However, his justifications began to fall on increasingly deaf ears.

Finally, in spring 1646, a small country vicar found the courage to make a public stand against Hopkins. John Gaule, the vicar of Great Stoughton in Huntingdonshire, took to his pulpit and openly preached against Hopkins’s. Not content with limiting his opinion to his parishioners, Guale then went public. He collected evidence of Hopkins’s abuses and publishing them in a pamphlet “Select Cases of Conscience Towards Witches and Witchcraft. The book was well written and convincing enough to win public favor and Hopkin’s reputation was further eroded.

In 1647, in an attempt to revive his credibility, Hopkins published a pamphlet, The Discovery of Witches. The booklet attempted to answer many of the questions raised by Hopkins’s critics regarding his motives- as well as describing the Witch Finder’s methods. However, the pamphlet’s explanations were either vague – or unoriginal. For many of Hopkins’s ‘tests’ were based upon those of James I in his Daemonologie. However, the booklet failed in its primary purpose because the times were changing. By the end of 1646, the first round of the English Civil War was over. Charles I was safely in Parliament’s hands and civic order was being restored. As a result, the social hysteria that had led to Matthew Hopkins’s witch hunting epidemic began to melt away.

In 1647, Matthew Hopkins disappeared from the historical record. One explanation was he was executed for witchcraft. Insider knowledge of Witchcraft was an accusation that had already been thrown at Hopkins. He had answered it in The Discovery of Witches by claiming that pure experience was his guide. However, according to William Andrews, a 19th Century writer on Essex folklore, one Essex town Hopkins visited believed he had to be a witch. So they tested Hopkins by swimming him in the local pond. According to some versions, Hopkins sank and drowned. However, in others, he floated. The locals promptly hung Hopkins on the spot-which explains why there are no records of a trial.

Execution for the very crime he had persecuted so many others for may have been a fitting end for Matthew Hopkins. Sadly, however, it seems his death was much more mundane. Realizing his time as a witch hunter was over, Hopkins parted company from his faithful team and returned to Manningtree with his ill-gotten fortune. There he may well have stayed, living a long and comfortable life. However, in 1648, John Stearne wrote his own book “A Confirmation and Discovery of Witchcraft.”In it, he revealed that Hopkins had died in 1647 “peacefully after a long sickness of a consumption.” Church records show that Hopkins did indeed die in Mistley. He was buried on August 12, 1647.

“A true and exact RELATION Of the severall Informations, Examinations, and Confessions of the late Witches, arraigned and executed in the County of Essex. Who were arraigned and condemned at the late Sessions, holden at Chelmesford before the Right Honorable ROBERT, Earle of Warwicke, and severall of his Majesties Justices of Peace, the 29 of July 1645.” Witch Trials.co.uk.