The Legend of the Jersey Devil is Riddled With Oddities, but Eyewitness Accounts Have Always Remained Consistent 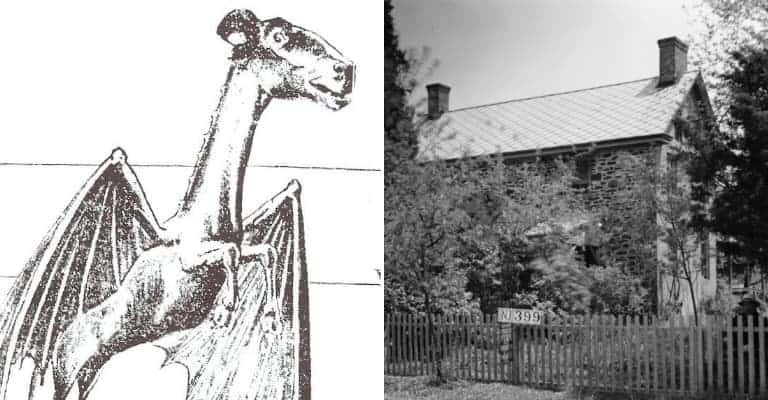 The Legend of the Jersey Devil is Riddled With Oddities, but Eyewitness Accounts Have Always Remained Consistent

In the Southern part of New Jersey, there is a huge 1,700-mile forest called The Pine Barrens. Even today, being in the Pine Barrens can feel like becoming a character in a horror movie. Cell phone reception is blocked, and one wrong step could lead to being lost in the woods forever. Even though it is close to Philadelphia, the forest may as well be thousands of miles from civilization. If it’s scary in modern times, one can only imagine what it was like living there hundreds of years ago.

The Leeds family was blessed with twelve children. At the time, it was extremely rare for a couple to have so many kids that actually survived. Rumors began to spread that Jane Leeds had sold her soul to Satan in exchange for all of those children. But all magic comes at a price, because on unlucky number thirteen, there were complications with the pregnancy. It was a dark and stormy night in 1735, and Jane Leeds was screaming out in frustration that this baby may as well be a demon. Finally, her bouncing baby boy was delivered, and the family gathered to see the child. At first, the child seemed as though it was a perfectly healthy normal baby, but that quickly changed. Right before their eyes, it transformed into a beast. It had the wings of a bat, the face of a horse, hooves, and horns. The devil screeched, attacking the midwife, and killing her. The baby flew into the fireplace and went out the chimney to live in the forest.

While this clearly sounds like an old folktale, and Mrs. Leeds seems to be the victim of a witch hunt from neighbors who were jealous that she never had to experience any of her kids dying. But the weirdest part of the story is that there have been actual witnesses who claimed to have seen the Jersey Devil for hundreds of years. Even to this day, there are people who believe that the legend is real. So, where did this story actually come from? And how much, if any truth, is behind it?

The Real Leeds Family Were Nothing Like The Legend

The first generation of the Leeds family settled in the South-Western part of New Jersey in the 1600s. Daniel Leeds became one of the first men to begin publishing books and almanacs in the New World colonies. They had been so successful, that their family became very rich and powerful. Today, there is even a town outside of Atlantic City called Leeds Point.

Fast forward a few generations to the late 1700’s. Benjamin Franklin opened up a printing press in Philadelphia, and he became a direct competitor of Titan Leeds, the ancestor who took over the family business. Since they were competitors, Ben Franklin started to talk trash about the so-called “Leeds Devil”. They both published nasty things about one another, including an accusation or joke that Franklin made that Daniel Leeds was actually a ghost who came back from the dead. In the end, Ben Franklin’s “Poor Richard’s Almanac” ended up being more popular. Leed’s Almanac’s sales began to dwindle, so they tried to make them more popular by adding astrological signs. There were plenty of people who thought horoscopes were fun, but since the Leeds were Quakers, his religion associated any astrological content to be part of “the occult”. Rumors began to circulate in his community that he was working with the devil.

To make matters worse, the Leeds family crest had dragons on it. In the minds of the Quakers, this was almost proof that they were somehow working with the Devil. The family began to be ostracized from their community.

If he was alive today, Benjamin Franklin would probably find it hilarious that his mocking of Titan Leeds eventually lead people to take the joke of “Devil Leeds” seriously, to the point where people were beginning to actually see this so-called monster in the Pine Barrens.

So, where did the story about Mother Leeds come from? One of the Leeds family members, Japhet Leeds, was married to his wife, Deborah. She had 9 children of her own, and Japhet had 4 children from a previous marriage. This made her a mother of 12 children, just like the legend says. At this point, their family was having such a bad reputation among the Quaker community with accusations of being involved in the occult, it’s really not that surprising that a story was invented about their 13th child that became a demon.

As we mentioned earlier, the Pine Barrens are not joke, and it’s easy to get lost. Parents began to tell this story of the Jersey Devil to their kids in order to keep them from running into the woods alone. Even though it was at the expense of the poor Leeds family, the legend was retold for another 250 years.

Most people remember Napoleon Bonaparte, but far less remember his brother, Joseph, who became the King of Spain. You probably don’t remember Joe, because he wasn’t very great at his job. He lost a war against the English, and had to step down from his throne. His brother Napoleon got a raw deal, as well, and ended up in prison.

Like a lot of people back in the 1800’s, they saw the United States as an opportunity to have a fresh start. Joseph Bonaparte decided to settle down on an 800-acre property in Bordentown, New Jersey. His estate was right in the middle of New York City and Philadelphia, so he was very happy to have a lot of land and easy access to two of the biggest cities in the country.

He built a mansion that was fit for a king, of course, and threw lavish parties in the French fashion. This impressed a lot of people, and he was able to make new friends. It was during one of these parties that Joseph Bonaparte heard the spooky story of the Jersey Devil from a local resident. Around a summer campfire, it’s all fun and games. But in the winter, his location in the middle of the forest was isolated, and he must have spent a lot of time alone.

One winter day in 1813, Joseph Bonaparte noticed tracks in the fresh snow that were very strange. They were hooves like a donkey, except it looked like the creature was walking with two legs, instead of four. He grabbed his gun, and decided to go looking for this unknown animal. As he followed the tracks, they abruptly stopped, as if the creature vanish…or flew.

Bonaparte looks up to see a creature that let out a hideous screeching and hissing sounds. It had huge eyes. Its wings are massive, and it has claws like a bird. It swooped down on him, and he ducked, falling backwards in the snow as the large creature flew away. Stunned, Bonaparte tried to relay the story to his friends. Since they also believed in the local legends, they were all convinced that he saw the Jersey Devil.

In modern times, historians believe that Bonaparte saw the Great Horned Owl. He would have never seen an owl like this back in France. Its wingspan can spread as much as 4.5 feet wide, and they are known for using their wings to make their bodies look huge when they go up against other predators. Sometimes, these owls can grow to abnormally huge sizes, as well. They can also swoop down and pick up snakes, which may account for the hissing noise. The bigger owls are even strong enough to pick up puppies and kittens. They also let out a screech that would be terrifying if someone heard it alone in the woods for the first time.

In the 1900’s, Someone Claimed They Caught The Jersey Devil

After such a famous person like Joseph Bonaparte claiming that he saw the Jersey Devil, other sightings seemed a lot less crazy. Stories of the legendary monster have continued on for over 200 years.

In 1909, there was a dramatic spike in Jersey Devil sightings. Over 1,000 people claimed that they spotted the creature. There were so many sightings reported it in the newspapers that citizens were genuinely scared. All of Gloucester County, New Jersey shut down their schools and businesses to hide inside, for fear of being chased by the actual devil. Later, it was spotted further north in New Brunswick and Trenton.

This was so perplexing, that the Smithsonian thought they needed to investigate. Was the Jersey Devil a newly discovered species of animal? The Philadelphia Zoo offered a $10,000 reward for capturing the beast. No one ever came forward with the animal. But the nearby Arch Museum decided to capitalize on the publicity by claiming that they had successfully trapped it before the zoo.

The poster for the exhibit said, “9th and Arch Museum. Caught! And Here!!! Alive!!! The Leeds Devil. Captured friday after terrific struggle. Exhibited exclusively here at $1,000 a week. The fearful, frightful, ferocious monster that has been terrifying two states. Swims! Flys! Gallops! Exhibited and securely chained in a massive steel cage. A living dragon more fearsome than the fabled monsters of mythology.” And all of that excitement was just 10 cents per ticket.

In reality, they took a kangaroo and painted it green, adding fake wings on its back. Some historians believe that everyone was seeing a rare migration of sandy hill cranes.

In 1929, a huge group of people also claimed that they saw the Jersey Devil in the woods of Clayton, NJ. The hysteria was so real, it even lead to a group of men grabbing their rifles and combing the woods, looking for the monster they would never find.

Even in the 2000’s, some people claim that they saw something in the woods that is beyond any rational explanation, and they are completely convinced that it was the Jersey Devil. No matter what we see out there, the truth remains- Don’t go into the woods alone.

The Secret History of the Jersey Devil: How Quakers, Hucksters, and Benjamin Franklin Created a Monster. Brian Regal and Frank Esposito. JHU Press. 2018.