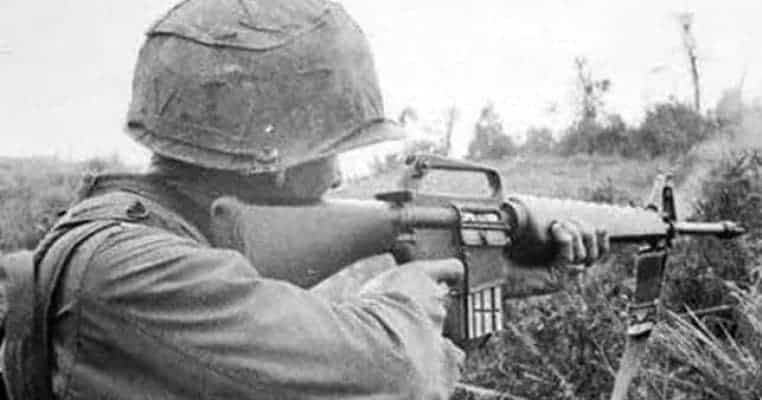 During World War II, American soldiers had the world’s best rifle, the M1 Garand – a highly reliable .30 caliber semi-automatic firearm, at a time when the rest of the world’s armies relied on bolt action rifles. The M1 performed with distinction, and general George S. Patton called it “the greatest battle implement ever devised“. By war’s end, military establishments were working on greatly increasing the issue of semi and automatic small arms to their forces as standard issue. Within five years, the M1 had itself become outdated.

The Korean War demonstrated that the Garand, cutting edge just a few years earlier, was now obsolete, its chief drawbacks being excessive weight, limited ammunition capacity, and lack of automatic fire. It was replaced with the M14 rifle – a souped up M1 upgrade, with a 20 round magazine and capable of automatic fire. While a vast improvement over the Garand, another Asian land war, this one in Vietnam, revealed that the M14 also suffered some serious drawbacks. So it was replaced with a new, cutting edge rifle, the M16. The M16 would eventually become one of the world’s greatest standard issue military rifles, and its progeny are still standard issue for American troops, more than half a century later. However, when first introduced, the M16 had some serious teething problems. They gave the new rifle a poor reputation and made it highly unpopular, until its kinks were finally worked out.

The Transition to the M16 Rifle

When the M14 first saw action in Vietnam, significant drawbacks emerged. For one, while the rifle was a stable and accurate platform when firing single rounds in semi automatic mode, it was virtually uncontrollable when firing on full auto. For another, while its 7.62mm NATO rounds were more powerful and could reach farther than the rounds of the AK-47 wielded by the American soldiers’ opponents, the M14’s cartridges were heavier. That weight meant that M14 users could carry fewer bullets, pound for pound, than their AK-47 wielding adversaries.

Worse, the disadvantages caused by the heavier weight was not balanced out by practical advantages. In most encounters, the M-14 rifle’s longer range was seldom needed in Vietnam, where there were relatively few wide open fields of fire, and where the rugged terrain and vegetation meant that most engagements took place at short to medium distances. Being able to shoot somebody at 500 yards, which the M-14 could reliably do with iron sights (and at 900 yards or more with a scope), was superfluous when most American troops seldom saw an enemy beyond 100 or 200 yards.

An alternative and older rifle, the M2 Carbine, offered a higher rate of fire than the M-14, but its bullets were underpowered compared to the AK-14, which generally outclassed it coming and going. An alternative was needed, and the AK-47, with its intermediate cartridge, pointed the way forward. To stand on an equal footing with the communists, American soldiers needed a rifle that could fire a round that was more powerful than a carbine or submachine gun, but that was lighter than a high velocity rifle round, whose long range was seldom needed in most engagements.

The debate was thus between greater killing or stopping power with a more accurate and longer range powerful weapon, or more bullets to keep an enemy’s head down at shorter range, with a higher chance of hitting and at least slowing him down. The debate led military authorities to rethink a rifle they had rejected in the 1950s: the Armalite AR-15. Developed in response to a US Army request, the AR-15 weighed 6 pounds with a 20 round magazine, fired .223 inch caliber (5.56 mm) rounds that could penetrate an American helmet at 500 yards, and matched or exceeded the wounding capacity of a .30 round. The Army turned it down, and stuck with the M14.

Vietnam forced a reconsideration, and early in 1963, Secretary of Defense Robert McNamara decided that the AR-15 was the superior rifle, and ordered a halt to M14 production. After minor modifications, the AR-15 entered US military service as the Rifle, Caliber 5.56 mm, M16. Composed of hard anodized aluminum alloys, fiberglass, and steel, the new rifle was significantly lighter than the M14, and the lighter weight of M16 and of its cartridges allowed soldiers to carry more ammunition. However, although superior on paper and during the testing that led to its adoption, the new rifle demonstrated some serious drawbacks when it first went into combat.

Drawbacks of the M16 in Vietnam

The M16 was ordered into production in March of 1964, and by the end of that year, the first models had been shipped to Vietnam and distributed to front line troops. The new rifles were widely panned. While the M16’s lighter weight when compared to its predecessor was a huge advantage, many troops reported that the new rifle was prone to jamming, especially at the most inopportune moment, when firing at the enemy – which, all things considered, is as inopportune as a moment can get.

Before long, dramatic tales were making the rounds, of entire patrols wiped out, their bodies discovered next to their jammed rifles, their dead hands clutching cleaning rods, testimony to their last harrowing moments on earth, spent in feverish attempts at clearing stuck cartridges. Whether such tales were actually true or were greatly exaggerated over dramatizations, it was clear that the new rifles had some problems, chief among them that they were prone to jamming. At least more prone to jamming than were their predecessors.

M16s were – and their progeny to this day still are – meant to be well maintained and cared for. Unlike AK-47s, which use a piston to extract empty rounds and chamber new ones, M16s run on a direct gas impingement system. When an M16 is fired, some of the expanding gas from the exploding cartridge goes into a small hole drilled into the barrel. From there, the gas is redirected via a tube back to the firing chamber. There, it hits (impinges) the bolt, forcing it back, extracting the now empty cartridge and chambering a new round.

A drawback of the direct gas impingement system is that, by blowing fired cartridges’ gas directly into the firing chamber, it also blows those cartridges’ residue in there as well, fouling the chamber. Hence, the need for frequent cleaning. The M16 was designed to fire a cartridge that used a specific powder to minimize that problem, but when the US Army discovered that the special powder could not be readily mass produced in 1964, it replaced it with an alternate that produced significantly more fouling.

The Army then made the problem worse by billing the M16 as a self cleaning rifle, when no such weapon has ever existed, nor likely ever will. The military then further exacerbated the problem by failing to issue the troops with cleaning kits, or to instruct them on how to go about cleaning their new rifles. On top of that, the firing chambers lacked chrome plating, leading to increased corrosion. When the inevitable jamming resulted, the original M16s lacked a forward assist – a device to manually push the bolt fully forward if it failed to do so on its own. It was a perfect storm of screwups.

The growing intensity of the war in Vietnam was accompanied by a growth in the notoriety of the M16 as an unreliable weapon. The first step in addressing the problem was to walk back the claims that the M16 did not need cleaning, let alone the bonkers notion that it was a self cleaning rifle. Along with cleaning kits, which were belatedly issued to the troops, training manuals were hurriedly printed and distributed, instructing users on how to go about cleaning, maintaining, and troubleshooting problems with their M16s.

Design defects with the rifle and its ammunition were also addressed. Cartridges using cleaner firing powder – for which the M16 had been designed in the first place – replaced the dirtier ones that had been initially issued to the troops. The rifle itself was redesigned, resulting in an improved model, the M16A1, whose firing chamber was coated with chrome, drastically cutting down on the corrosion problems of the original version. The redesigned rifle also featured a forward assist, allowing troops to manually tap the bolt forward when necessary.

Between the new emphasis on training and instructing the troops on the proper cleaning and maintenance of their rifles, the cleaner firing cartridges, and the redesigned M16A1, the problems plaguing the original M16 were largely gone by 1968. For many front line combat troops, being in Vietnam might have still sucked, but being stuck in a war with an unreliable rifle was no longer among the reasons that made Vietnam an especially unpleasant experience.

The M16 is a great rifle in the hands of professionals who are trained to maintain and get the most out of it. It is not as forgiving a weapon as the AK-47, but for those who know how to take care of it, the M16 is a significantly better and higher performing firearm than its Russian counterpart. Unlike the AK-47, the M16 is not a rifle well suited for irregulars, peasant insurgents, and poorly trained guerrillas. It can not be buried in a swamp, then taken out and be expected to fire without mishap. M16 users are expected to maintain their weapon by cleaning and inspecting it on a daily basis, which makes it a, literally, higher maintenance weapon than the AK.

However, that higher maintenance is counterbalanced by higher performance. Professional soldiers – and the American military establishment is as highly professional a military organization as exists anywhere – are trained to maintain and clean their weapons as a matter of daily routine. It is not an onerous chore, but simply part of the job for professionals. In exchange, they can expect – and have gotten for decades now – higher performance from their M16 rifle family than their opponents who wield the AK-47 and its derivatives.

American Rifleman – US M16: A Half Century of America’s Combat Rifle

Gunivore – History of the M16 Rifle

Pew Pew Tactical – A (Not So) Brief History of the M16

National Interest, The, October 1st, 2018 – Did the M16 Rifle Totally Fail During the Vietnam War?