The Hair Raising Curse of Papillon Hall Began With the Demise of a Mysterious Mistress... and Her Slippers 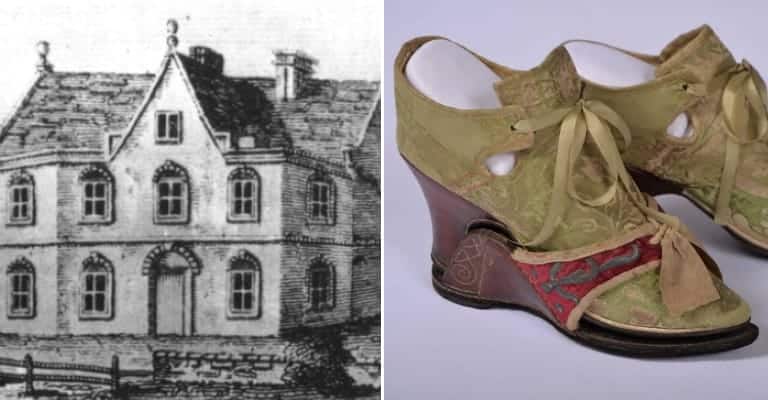 Nothing remains of Papillon Hall. In 1950, after years of being left to rot and decay while waiting to be sold, it was finally demolished, an unwanted relic of the past. However, in its day, the Hall was an impressive building. It was constructed in 1622 by military engineer David Papillon as his family seat. Fortress-like, the octagonal shaped house loomed over the land surrounding the village of Lubenham in Leicestershire.

Today, a very ordinary farm occupies the land. The only traces of the once grand country house are its overgrown gardens, perimeter wall, stables- and a pervading sense of unease. For although the house has gone, its reputation remains. For Papillon Hall was the quintessential English haunted house, complete a cursed portrait a very temperamental pair of Lady’s slippers, and eerie history. That history began in the fourteenth century when the land was in the hands of Leicester Abbey.

The Legend of “Pamps”

In 1303, Edward I asked the abbot of the Abbey of St. Mary de Pratis in Leicester to grant a “corrody,” of food, clothing, money or land to one William Papillon for his services to the crown. The Abbot obeyed and awarded William land near the village of Lubenham. The area came complete with a Chalybeate well with reputed healing properties- and the Abbey leper colony. For the next couple of hundred years, the Papillon family ignored their Leicester property. They had come over to England from France at the time of William the Conqueror, and it was to France they returned.

In 1588, the family was back in England, fleeing the Huguenot persecutions in France. The Papillons reestablished themselves in English society and in 1622, David Papillon; a military engineer began to construct an impressive country seat on the land at Lubenham. Papillon Hall took two years to build, and its design showed the influence of David Papillon’s military background. The octagonal shaped house occupied the highest point of the estate, the land sloping away from it on all sides. It had just one entrance and was rumored to be surrounded by a moat! Even the roof of the house was a defensive feature. The gables, which formed a cross shape were paved with lead on either side to create platforms accessible from the attics. Cannons were stationed on the platforms, as if ready to defend the house.

The Papillon’s only occupied Papillon Hall for a few generations. The last Papillon to live in the Hall was it’s builder’s great-grandson, also called David but better known locally as “Lord Pamp,” or just “Pamps.” Pamps was in his early twenties when he became the master of Papillon Hall. However, he also had a sinister reputation as a mesmerist. One look from Pamps was reputedly enough to force his victims to do his bidding. One Lubenham tale told how two of Pamp’s farm laborers made a bad job of plowing a field. Pamps convinced the shoddy work was due to laziness, mesmerized the men so that they were unable to move until he released them at the end of the day.

Pamps was also rumored to keep a mysterious Spanish mistress within Papillon Hall. No one ever saw the strange woman, as Pamps would not allow her to leave the building. However, it was whispered she occupied one of the attic rooms and roamed the lead flats after dark. Then in 1715, the lady reputedly died, and two years later, Pamps married and left Papillon Hall for Kent, never to return. However, before he departed, he left precise instructions regarding some of the house’s contents. One was a portrait of Pamps himself, painted in 1715. The other was a pair of green and silver brocade lady’s slippers. Pamps ordered that under no circumstances were either of these items ever to leave Papillon Hall.

By 1756, the Papillon family had established themselves at a new countryseat at Acrise Park in Kent. Eventually, in 1764, Pamp’s son sold Papillon Hall to a Mr. William Stevens. The house subsequently changed hands a number of times without giving any sign of housing any restless spirits. In 1866, the Bosworths (the owners at the time), decided to sell the Hall. The buyer, a Lord Hopeton, took on the land and the house. However, the contents of Papillion House including the brocade slippers- were passed on to one of the Bosworth daughter’s.

Not long after they moved into Papillon Hall, Hopeton and his household found themselves plagued by inexplicable knockings and bangs from around the hall. Careless accidents abounded. The noisy phenomena continued to increase until it reached a terrifying peak one December night. The terrified household was raised from their beds by the sound of furniture being thrown violently about the drawing room. They huddled together in the hall’s lobby until finally, someone plucked up the courage to investigate. However, when the brave volunteer entered the drawing room, not a stick of furniture was out of place.

Lord Hopeton decided to consult the local rector. Finally, he learned the legend of the slippers and painting- and quickly set about restoring the items to Papillon Hall. The nocturnal disruption immediately ceased. Hopeton remained at the Hall until 1872 when he sold it to a Mr. Thomas Halford. He was careful to inform his buyer of the curse. However, Halford had no truck with superstition. He regarded the slippers as antique curiosities and so jumped at the chance to send them to the Paris Exhibition of 1878. He quickly changed his mind and tried to retrieve the slippers only to find as registered exhibits; they had to stay in Paris for the yearlong duration of the Exhibition.

The Halfords eventually moved out of Papillon Hall until the slippers finally came home- and then sold the property. The new owner, C W Walker, decided to take no chances with the curse. He had an iron safe built over The Hall’s fireplace- and secured the shoes within it, therefore ensuring his tenure at Papillon Hall was a peaceful one. However, in 1903 the shoes were removed again when the new owner Captain Belville began to renovate the house. This time, a falling brick killed a builder and Belville, and his wife narrowly escaped death in a pony and trap accident. The slippers were quickly returned to the house and placed in a glass vase on a side table in the parlor.

During the Second World War, Papillon hall played host to the US 82ndAirborne Division. After learning of the legend of the slippers, a group of soldiers decided to test out the curse. So a group of them decided to take one of the slippers out of the house. Within weeks the ringleader was dead and the others, fearful of the same fate, returned the missing slipper. However, just two weeks later, two other soldiers repeated the joke. They both died during the Nijmegen airdrop of 1944-. As for the missing slipper, this time it mysteriously made its own way back to the hall.

Papillion Hall and its Ghosts Today

By 1950, Mrs. Barbara Papillon decided to visit Papillon Hall. She found “the house was in a parlous condition, weeds growing up to the lower windows, and doors open and swinging on broken hinges.”Papillon Hall had been deserted since the war. No one wanted to buy it, and so it was scheduled for demolition. As Mrs. Papillon explored the sad remains’ of her husband’s ancestral home, she came across one of the cursed slippers, sitting in the now open safe. She took the shoe home with the permission of the head of the demolition company. The second shoe later joined it when it was found hidden under a floorboard. Both now reside in Market Harborough Museum.

So who exactly was the Ghost of Papillion Hall? Most people favor the mysterious Spanish lady who was kept hidden by the mesmerist Pamps. Based on the links between the hauntings and the brocade slippers, Pamp’s mistress does seem like a likely candidate- especially as during the in 1903 renovations, a female skeleton was found walled up in a small room in the very attic the lady was supposed to occupy.

However, it could be that the Spanish Lady does not haunt alone. For the ghost of Pamps himself has been sighted. One night, one of the servant girls claimed to have seen a male spirit materialize at the end of her bed. She identified it as the strange man in the portrait in the hall below. On more than one occasion, residents and guests at the house reported seeing misty columns near the picture, which formed themselves into the semblance of Pamps himself. Could it be, for whatever reason, that Pamps returned to his former home to rejoin his former mistress?

Misty ghosts aside, the portrait had an unsettling effect on many residents, some of whom felt it exuded an evil air. Finally, members of the Belville family decided to have the painting removed. So they contacted Pelham Rawston Papillon and asked him to remove the picture to his home in Hastings. Pelham agreed and sent two of his servants to collect the portrait. However, as soon as the painting arrived in Hastings, one of the servants had an accident and died.

In 1988, local man David Allen decided to visit the site of the hall. Although the house was gone, the garden and outbuildings remained. A farm now occupied the land and the owners, the Hughes family, told Allen and later a team of reporters from BBC Radio Leicester that a presence remained. One of Mrs. Hughes’s sons spoke of a feeling of unease and of being watched when he worked in the fields. Strange noises had also been heard around the stable block. So the news team decided to do an outside broadcast. After a segment of their tape mysteriously wiped itself clean, they rerecorded – only to find when the tape played back the sound of a child crying.

Papillon Hall may be gone. However, the mystery of its curse grows deeper.

Ghosts and hauntings in and around Leicestershire, Andrew James Wright, Heart of Albion Press, 2006.

Report on the History of the Garden at Papillon Hall, Leicester and Rutland Garden Trust, 2013