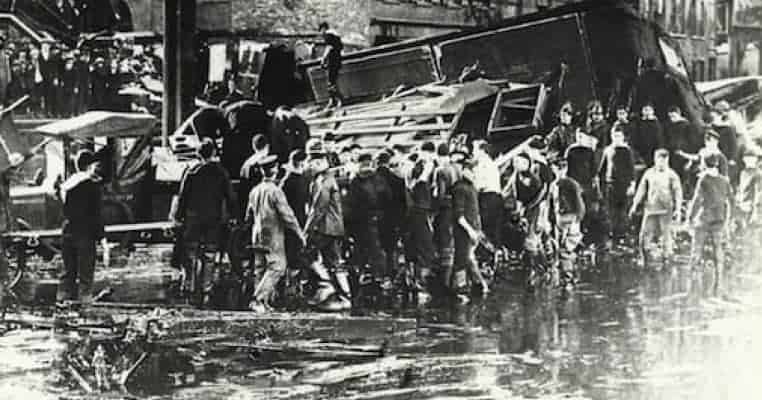 January 15, 2019, marked the 100th anniversary of one of history’s most bizarre disasters, Boston’s Great Molasses Flood. This flood started shortly after noon on January 15, 1919, and took over 300 people about six months to thoroughly clean up. However, those living on Commercial Street in Boston’s north end would be able to smell the disaster for decades to come. On top of that, it would take about six years before there would be an end to the trial which came out of this strange tragedy.

Unknown to everyone at the time, the story of Boston’s Great Molasses Flood of 1919 would begin four years earlier in 1915. Purity Distilling Company, which was also known as the United States Industrial Alcohol Company, built a tank to hold molasses. Not only can molasses be used for cooking, but it can also be used to make rum. The company knew that they would need a large tank to hold all the molasses. They even knew they needed to build the tank cheaply and as quickly as possible.

Steps Towards the Bizarre Disaster

The United States Industrial Alcohol Company hired one guy to build the tank for the molasses. He was not an engineer and did not know how to read a blueprint. On top of this, the company did not hire any engineers or other professionals to make sure the supplies for the tank or the tank itself was safe to use. Part of the reason for this was the company did not legally have to. The other part of the reason was that this would have cost the company more money and they did not want to spend more money.

The company decided to the tank should be 50 feet tall and 90 feet wide. They wanted to make sure the tank could hold 2.5 million gallons of molasses because their need for molasses was increasing and they only felt it would continue to grow. The company was right about this as prohibition was about to set in and the United States Industrial Alcohol Company was one of the companies which would be able to produce alcohol legally, especially during the time of the disaster.

With the building of the tank completed, the company immediately began to use it. They did not worry about the tank getting inspected because they felt they had bought just the right supplies to hold the 2.5 million gallons of molasses. However, people around Commercial Street quickly began not only to notice a nasty smell but also see the tank leaking around its corners. On top of this, one of the company’s own employees told his boss about the leaking he had noticed around the tank.

At first, the company did nothing to stop the leaks from the tank. However, this also meant that they were gaining more enemies around the area then friends. So, in order to make people happy, the company decided they would fix the problem. But instead of bringing in someone to make sure the tank was safe and sound, the company decided to paint the tank brown which would hide the leaks better. They also chose to re-caulk around the tank. Unfortunately, for the people on Commercial Street, this would not fix the problem.

Between the hour of noon and 1:00 pm, kids were played on Commercial Street while others went for a walk or to run errands. The fire department, located right next to the United States Industrial Alcohol Company, was filled with firefighters who were playing cards while eating lunch. For everyone on and around Commercial Street in Boston, it was like a regular day. That was until people heard what they thought sounded like a gunshot and within seconds, without even knowing what was happening, their world would change.

The bang that the residents thought was a gunshot was really the explosion of molasses from the tank. The 25-foot high and 100 yards wide tidal wave of molasses started to head down Commercial Street at 35 miles per hour. Those in its path had no chance of escaping. The rushing tidal wave of molasses swallowed many people up, which caused them to suffocate. As the flood of molasses started tearing down the street, it demolished everything in its path, including the fire department, houses, and a large section of elevated tracks in the area.

While police officers, other first responders, and 100 USS Nantucket sailors from the navy were quick to respond, rescue efforts were slow. The molasses was not only waist deep, but because the temperature was only 40 degrees Fahrenheit, the molasses started to thicken. These conditions made it harder for rescue personnel to reach the residents that needed their help. In order to break up the molasses, the firemen had to use salt water. From there, they were able to use the water from their hoses to send the molasses to the gutters.

In total, clean up took about six months and an estimated 80,000 hours. The last body from the molasses flood was found four months after the tragedy. This man was riding down the street when he was swept up by the molasses and thrown into the river. The molasses flood had only reached a half mile, but the property damage totaled around $100 million in today’s currency. In the end, there were 21 lives lost and about 150 people injured.

Why the Explosion Occurred

Of course, it did not take long after the explosion of the tank for people to start blaming others for the tragedy. While the families along Commercial Street quickly pointed the blame at the company, the United States Industrial Alcohol Company pointed fingers elsewhere. They blamed the anarchists, a terrorist group who bombed several places before the explosion. But just as quickly as first responders arrived, investigators began looking for a cause. It did not take the investigators long to figure out who the real culprits of the explosion were.

With the large tank being built too quickly, it was very unsafe. The United States Industrial Alcohol Company hired someone who would do the work for cheap. The builder of the tank was not equipped to handle such a job. On top of this, the metal which was used to make the tank was too thin to control the amount of molasses it was holding. Not too long before the explosion of the container, the United States Industrial Alcohol Company received a large molasses shipment.

Adding the new shipment of molasses to what was already in the tank, the total gallons of molasses came to 2.3 million. The metal on the tank, which was the same metal used on the Titanic, could not hold that much molasses. On top of this, because the tank was built so quickly, and the builder had little idea on what he was doing, the corners of the tank were not fully together. The caulking that the company tried to use to put the edges together or fix the leak was not able to hold the weight of the molasses.

Once the news hit that the United States Industrial Alcohol Company was to blame for the explosion because they did not build the tank correctly or fix the leaks that residents and the company’s employees mentioned, the residents went after the company. Whether the working-class families lost a loved one, a home, or a business they sued the company. In total, people filed 125 lawsuits against the United States Industrial Alcohol Company. However, the settlements would not be reached for years to come.

In fact, it took a total of six years before the families would see any money from the company. Colonel Hugh Ogden was chosen to head the lawsuits. He had to hear about 3,000 testimonies between both sides before the conclusion of a settlement. In the end, the United States Industrial Alcohol Company had to pay each victim’s family 7,000 dollars. The company also had to pay for damages and other costs. In total, the company would pay out $628,000, which is $8 million today.