The Flying Dutchman: The Tale And Tragedy Of The World's Most Famous Ghost Ship 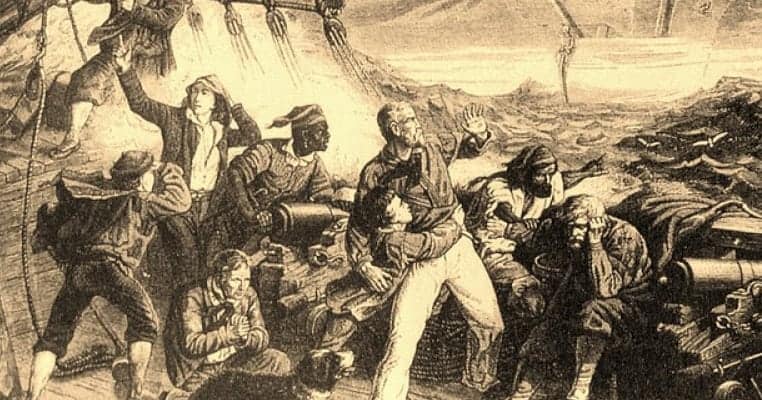 The Flying Dutchman: The Tale And Tragedy Of The World’s Most Famous Ghost Ship

When you gaze out into the ocean what do you see? Do you see a vast, blue expanse, that seems to connect you to every corner of the earth? What about when the tide crashes into you and tries it’s best to pull you back, does it remind you of the consuming power of the seven seas? As sailors set out to sea and began their work, they were usually gone for many months or even a year or two at a time. Companies like the Dutch East India Company and the Virginia company, kept men out in the elements around the clock. In the sailors travels they pass time swapping stories and tales of adventure from the past, to horror stories, and lessons to be learned. Some of the greatest tales that have ever surfaced have deep roots in Nautical realm. Tales of folklore are captivating and seem to stand the test of time. In some, they explain our greatest fears, tragedies, and existence. Others however, are cautionary tales to help wayfaring strangers keep on the straight and narrow as they pass through. In this tale we will explore what is one of the greatest stories ever told and discover what exactly is the Flying Dutchman.

Was the Flying Dutchman Man or Vessel?

The tale of the Flying Dutchman started around 400 years ago. In 1641 Captain Hederick Van der Decken was returning home to Amsterdam from a trip in the East Indies. He was sent by the Dutch East India Company to bring silks, dyes, and spices back to the Netherlands. Like so many other trade ships, this one was faced with the danger of sailing around the Cape of Good Hope. Aboard his ship, The Flying Dutchman, was an exhausted crew and their hunger for adventure had died as their appetite for home grew stronger. This trade mission, however, would prove to be the last for everyone aboard. A storm began when van der Decken and his crew attempted to round the cape. This cape, though deceivingly named, had a reputation for being highly dangerous and unforgiving for any of those who tended it in clear weather let alone in a storm. The crew desperately begged their captain not to sail into the chaotic waters, but he refused. He was determined to conquer the storm.

No one knew for sure why the captain was so adamant about rounding the cape instead of pulling in harbor for the night. Had he gone mad? Or was he inebriated and not fully understanding the circumstances at which he and his crew faced? Nonetheless, once realizing that they were on board for a ride into certain death, the crew organized and attempted a mutiny. Van der Decken did not tolerate these behaviors and captured the leader of the rebels, killed him and throwing him overboard. The legend even further goes on to say that an angel had appeared in front of the captain begging him to have pity on his men. He commenced to then cursing the otherworldly visitor and swearing that he would remain there on his ship until judgment day, sealing their fate. Nothing was going to stop Van der Decken from rounding the cape and going back to his home in Amsterdam. The ship was beaten and battered by the waves until eventually it crashed into the rocks that were so famous on the Cape of Good Hope. This would be the last that anyone would see of this crew alive, and the beginning of their eternal cruise.

Folklore Brings New Life to the Ghost Ship And Her Crew.

It would be sometime after the Flying Dutchman met it’s fateful end before the captain and the crew would gain notoriety. The first print reference to the ship appears in: Travels in various part of Europe, Asia and Africa during a series of thirty years and upward(1790) by John MacDonald where he writes;

“The weather was so stormy that the sailors said they saw the Flying Dutchman. The common story is that this Dutchman came to the Cape in distress of weather and wanted to get into harbour but could not get a pilot to conduct her and was lost and that ever since in very bad weather her vision appears”.

John MacDonald would be the first of many to create or pass down tales of the Flying Dutchman. Others would include George Barrington in his book, A Voyage to Botany Bay (1795). Thomas Moore in his poem, Dead-man’s Island in the Gulf of St. Lawrence, Late in the evening, September, 1804. And John leyden, who first brought forth the motif of punishment of a crime that the captain and crew had committed;

“is a common superstition of mariners, that, in the high southern latitudes on the coast of Africa, hurricanes are frequently ushered in by the appearance of a spectre-ship, denominated the Flying Dutchman … The crew of this vessel are supposed to have been guilty of some dreadful crime, in the infancy of navigation; and to have been stricken with pestilence … and are ordained still to traverse the ocean on which they perished, till the period of their penance expire”.

The ship has even been spotted by royalty, Prince George of Wales who would later become King George V. He was on a three-year voyage during his late adolescence in 1880 with his elder brother Prince Albert Victor of Wales and their tutor John Neill Dalton. They temporarily shipped into HMS Inconstant after the damaged rudder was repaired in their original ship, the 4,000-tonne corvette Bacchante. It would be later revealed that in the early morning around 4 AM, the crows nest look out spotted a ghostly ship. He would then commence to come down off of his post to bring attention to the vessel. 13 people total would see the ship, however, it is said that the whistleblower who mentioned the ship’s present would mean eerie demise. He would fall from the fore topmast crosstrees on to the top gallant forecastle and would be smashed to pieces. This was a very common trend with many people who were first attributed to spotting the ghostly ship. As the ship was almost always a sign of impending doom to come.

Can Science Bring Light to The Age-Old Tale?

Coming of the modern sometimes can mean looking back and trying to explain what could not be explained. As we broaden our knowledge of the natural world and the odysseys that surround it might, we be able to explain what it is the sailors have been seeing for hundreds of years? The overwhelming acceptance of what the sailors were possibly seeing was a mirage. There are three forms of a mirage. One is an inferior mirage where the images located below the object that is being reflected, another is a superior mirage where the images located above the object being reflected, and the last is a Fata Morgana. The latter of the three being the culprit.

A Fata Morgana, the name of which comes from the Italian translation of Morgan La Fay, the fairy shape shifting half-sister of King Arthur, is a very complex superior mirage. It appears with alternations of compressed and stretched areas, erect images, and inverted images. This mirage can also flip between resembling a superior mirage to an inferior mirage. They are also fast moving mirages and help further drive the final nail in the coffin of what the Flying Dutchman could have been. The tale of the Flying Dutchman will always live on. It is a story of what ego can do to an entire crew and how personal gain and financial prosperity should never come in the way of human life.