The Dynamite Boys of the 1890s Terrorized Paris 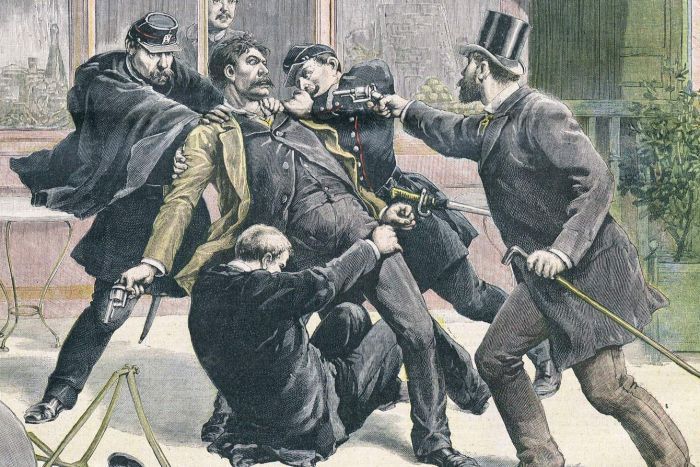 The Dynamite Boys of the 1890s Terrorized Paris

Emma Goldman wrote that “every society has the criminals it deserves.” The 1890s saw a major uprise anarchist activity. Things were especially explosive in France; Paris seemed to have a knack for producing thunderously radical political outlaws. Auguste Vaillant, Ravachol, and Emile Henry were all in their early twenties when they acted out their convictions against French society by lighting the fuses of their self-made bombs.

Industrialization bred more than just mass-produced goods. A growing discontent was felt by a number of factory workers who left their rural settings for jobs that offered long hours, little pay, and substandard living conditions. The setting fueled contempt, particularly toward the bourgeoisie, whose middle-class standards were accused of being aligned with everything that was shallow and hedonistic.

Their lack of depth was perceived to be in conjunction with an untempered appetite for material goods. They shopped while the people around them starved. Leading the charge against the bourgeoisie was Auguste Vaillant, remembered for his bombing of the French Chamber of Deputies on a cold December day in 1893. The bombing only caused slight injuries, but Vaillant was arrested, tried, and executed in February 1894.

Vaillant did not have an easy life. He was abandoned by both his parents and by the age of 12 had spent time in jail for begging and stealing food. He eventually fled to Argentina with the hope of a fresh start but struggled and finally returned to France after concluding there was no way to escape poverty’s hold on him. He settled in Paris, where he learned about anarchist ideas, which he later used as an outlet to vent his plight.

During his trial, Vaillant summarized his life had been spent bearing witness to injustices caused by capitalism. Industrialism and factories were, from his point of view, the intestines of a vampire culture sucking the life out of society. During his time in Argentina, he hoped to escape a money-driven, mass-production reality that was swallowing Europe whole. His romantic ideals were dashed. Argentina was in lockstep with the industry boom happening throughout the world, whether through factories or the raw materials needed to create the goods being made in factories, and the competitive capital spirit was thriving at the expense of the poor.

For Vaillant, returning to France only afforded him the opportunity to watch his family suffer. In the world of measuring wrong against wrong, this made more sense to him than passively standing by and watching. Vaillant underscored that his bomb was devised to harm and not kill. He saw justice in his actions, which were on par not as severe as those carried out through negligence every time a mine collapsed, or factory workers died, the proprietors of those businesses were not held accountable — this was Vaillant’s overarching reason for his actions.

His court defense was overlooked but his actions were taken seriously. The French government used his behavior to pass a wildly controversial law intended to stamp out terrorist activities which were gaining popularity. Before Vaillant, a man named François Claudius Koenigstein, better known as Ravachol, struck terror into the heart of France.

Ravachol was executed on July 11, 1892, not long before Vaillant followed in his footsteps. Ravachol, like Vaillant, had come from a fragmented family background. His father abandoned him and his mother, brother, and sister when Ravachol was only eight-years-old. As the eldest of the siblings, he filled the role his father did not want and worked to support the whole family.

Familiarity with unsavory working conditions led Ravachol to become politically active in fighting for better work environments. At the same time, his anarchist ambitions began to take shape possibly as a result of physical altercations with police that turned violent during a demonstration for better working conditions. On May Day in 1891, Ravachol and other demonstrators were in the village of Fourmies, in the north of France. The police opened fire on the peaceful crowd, killing several people and wounding many more. Elsewhere in France on the same day, police behaved in a military fashion, arresting, beating, and shooting protesters.

The injustice inspired Ravachol to take action. He brazenly placed bombs in the homes of two city officials. General Léon Bulot (executive of the Public Ministry), and Edmond Benoît had both taken part in the court cases against those arrested during the May Day events. Ravachol is thought to be responsible for additional bombings, including at the Restaurant Véry. Nevertheless, to many Ravachol was a heroic figure. He stood trial, was executed and mythologized just as fast. The French workers could not help but admire him. Artists found inspiration in him. Songs were written in his name as were more acts of terror, including the bombing, carried out by Vaillant.

The rising popularity of anarchists alarmed the French government. Directly after Vaillant’s execution, a controversial law was issued that had two purposes. It was intended to demonize anarchists, restrict the press and free assembly, and it made anti-military sentiment a criminal activity. The law made support of any crime a crime in itself. The blanketed wording precluded that all anarchist literature and propaganda would be effectively suppressed, and those who broke the law would be imprisoned…but the band played on.

It was nearly 8 p.m. on February 12, 1894; an orchestra was playing music. Emile Henry lit a cigar and waited. He claimed during his trial that his intention that night was to kill as many bourgeoisie as possible. To him, they represented everything that was wrong with society. Henry was part of the tapestry of young men who were unable to advance socially. Henry, however, was not like Vaillant and Ravachol; he had been offered ample opportunity from French society. From a young age, France offered him a scholarship that endowed him with access to an excellent education. With it came opportunities to engage on a broad social spectrum. His intellectual dexterity landed him in an elite French university. It could be that Henry found himself being pulled by polarized ends of the universe: he was invited into a social sphere wholly incompatible with his upbringing.

Henry was born to a revolutionary line of ancestors; his father and brother were both members of radical fringe groups. His brother, in particular, was an anarchist. Henry’s brother was a spokesperson for the cause. To be a part of that, Henry had only two assets at his disposal; his keen chemistry skills and his life. He lost most of his jobs – one of the last was lost after his boss found a translated Italian newspaper at his work desk called, “Long live theft, long live dynamite!” The 20-year-old had been reading about how to make nitroglycerin during his work shifts.

During his court trial, he echoed Vaillant’s words: it was always the more malevolent characters advancing the most, and with ease. Anyone with a sinister or subservient disposition willing to follow along on the trail of degradation and deceit would be rewarded. Factory owners disproportionately kept massive profits and underpaid their workers, politicians took bribes, police upheld the corrupt system; the injustice riled Henry, which is why he devoted himself to bringing down the system. Henry’s dedication to the anarchist movement was apparent. When he was eventually caught by the police, an arsenal of bomb-making material was discovered in his apartment.

Without pause, Henry confessed to the bombing and added that Café Terminus was not his first act of terror. He added he was the mastermind behind several other bombings throughout Paris, including the Carmaux Mining Company, where a bomb exploded after police found it and were busily taking it apart. Henry’s contempt toward the bourgeoisie was fierce, but it alone was not the motive for the various bombings.

A week after Vaillant’s death sentence was carried out; Henry loaded his revolver with bullets that were rigged to cause the most damage possible, he armed himself with a poisoned knife and placed a homemade bomb in the pocket of his overcoat. He made the long journey from the unimpressive Paris outskirts until he arrived in the wealthy area concentrated around the Opera Garnier, which was his desired target.

Henry discovered the building was too hard for him to enter, as it was heavily guarded. With that, Henry reconsidered his plans. That night in Cafe Terminus, he pulled the bomb from his coat pocket and lit the fuse. The explosion killed one person and left twenty injured. Henry’s escape plan was thwarted when he was stopped, first by a waiter, then by a patron. He never saw his 22nd birthday, was found guilty executed at the age of 21.