The Dramatic Siege of Malta During the Second World War 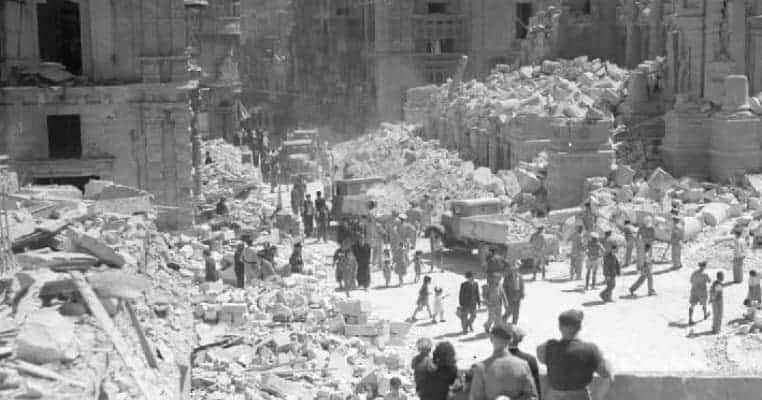 The Dramatic Siege of Malta During the Second World War

The island of Malta is situated roughly in the center of the Mediterranean Sea, about 175 miles east of Tunisia, 200 miles north of Libya, and 50 miles south of Italy. A British possession since 1800, Malta’s strategic location rendered it vitally important to both the Axis and Allies during World War II’s North African Campaign. So the Italians and Germans did their best to try and wrest the island from the British by bombing and starving it into surrender, or at least render it useless as a military base.

The British – and the Maltese people – put up a heroic fight to keep the island supplied, and a going concern as a fortress from which to foil the Axis’ plans in the Mediterranean. The result was a ferocious campaign, from 1940 to 1942, that pitted the German and Italian navies and air forces against the British Royal Navy, Royal Air Force, and the Maltese people. The island suffered heavily, with the heaviest punishment falling upon the densely populated capital city of Valetta, and the adjacent harbor. Those areas, measuring about 0.75 square miles, were subjected to history’s most sustained and concentrated bombing campaign.

With Malta in Allied hands, warships and warplanes operating from the island were well positioned to interdict and harry convoys ferrying supplies and reinforcement from depots in Italy to Axis forces in North Africa. In Axis hands, Malta would have interdicted Britain’s Mediterranean links to Egypt, and severed communications and coordination between British forces in the Eastern Mediterranean from those in Gibraltar.

Early in the war, the British reasoned that Malta’s proximity to Italy rendered it indefensible. So they withdrew the bulk of their fleet and relocated it to Alexandria, Egypt, and stripped the island of airplanes. Luckily, the aircraft carrier HMS Glorious had ditched some crates of obsolescent Gloster Sea Gladiator fighters in Malta during a stopover in early 1940, and local assembled six of them into an ad hoc squadron. They were flown by pilots who had trained on airboats and transports, but who lacked any experience with fighter aircraft.

When Axis operations against Malta began after Italy joined the war in June of 1940, the six Gladiator biplanes were all the fighter cover the island had. Operating out of the RAF’s Hal Far airfield, they came to be known as the “Hal Far Fighter Flight”, and because no more than three of them flew at once, the ones in service were nicknamed “Faith”, “Hope”, and “Charity”. The Gladiators might have been obsolescent, and their pilots inexperienced and untrained, but they put up a spirited fight starting with the first day’s fighting, when the Italians sent about 120 bombers and dozens of fighters to bomb and strafe. One of the defending Gladiators was shot down, but the rest shot down several Italian airplanes in turn.

A series of flukes had created Malta’s defensive air force, and another series of flukes ended up creating the nucleus of the island’s offensive aerial arm. It commenced with twelve Royal Navy Fleet Air Arm Fairy Swordfish torpedo bombers showing up out of the blue, to land at the Hal Far airfield on June 19th, 1940. It was the culmination of a journey that began in southern France, which the biplanes had fled just days ahead of the French surrender to Germany. They made their way to airfields in French Tunisia, but lack of security there prompted them to seek somewhere safer. So they flew to Malta. The locals quickly put them to use, and within little more than a week, the new arrivals had raided Sicily, sank an Italian destroyer, damaged a cruiser, and destroyed oil storage tanks in the port of Augusta.

Despite the pluckiness of Malta’s defenders, the Italians probably could have captured the island in those early months if they had mounted a determined air and sea attack, combined with an amphibious landing. The garrison was simply too small to offer serious resistance, and the British were busy fighting for their lives at home in the Battle of Britain. They had little attention to give a tiny Mediterranean island that they had already written off as indefensible.

By the fall of 1940, the British had come through the Battle of Britain, and with their home islands secure from invasion, they were able to pay closer attention to what was going on elsewhere. In September, Mussolini had sent his armies from Libya to invade neighboring Egypt, but it turned into a fiasco. The Italians crossed the border, only to halt after a 50 mile advance and dig in. They were routed that December by a British force only a fifth their size, which killed, wounded, and captured about 150,000 Italians.

The rampaging British threatened to overrun all of Italian Libya, before other commitments forced them to halt their advance and cannibalize its units in order to send reinforcements elsewhere. British arms met further successes against the Italians that December, when a surprise air raid from Royal Navy aircraft carriers devastated the Italian fleet at anchor in Taranto. The survivors were forced to flee their base in southern Italy, from where they had threatened British Mediterranean sea lanes, and scurry for safety elsewhere.

The Italian threat, although contained, had refocused British attentions on Malta and its potential as a base from which to disrupt Axis efforts in the Mediterranean. In the meantime, the Italian debacle had compelled Hitler to come to his ally’s aid, and early in 1941, a German corps under the command of Erwin Rommel was sent to North Africa. Rommel, whose forces were often forced to operate on a shoestring because of a precarious link to resupply and reinforcements from Europe, recognized Malta’s importance. In May of 1941, he bluntly warned that: “Without Malta, the Axis will end by losing control of North Africa“.

The Germans joined the Italian air campaign against Malta in late 1940, when the Luftwaffe sent to Sicily bomber squadrons of Ju 87s, Ju 88s, and Heinkel He 111s, along with Me 109 and 110 fighter units. By then, Malta’s obsolescent Gloster Gladiators, flown by amateurs, had been reinforced and replaced by newer fighter aircraft such as Hurricanes, flown by RAF and Fleet Air Arm pilots. They had their hands full against the Germans, whose Me 109s were superior to the British Hurricanes, and were flown by better pilots to boot. One of the German crack fighter wings, 7/JG-26, claimed 42 aerial victories in its first four months of operations, without losing a single airplane over Malta.

In the face of such lopsided losses, morale plummeted in British squadrons in Malta. During that period, Axis supplies to North Africa were largely unimpeded, with roughly 95% of the tonnage shipped from Europe arriving safely in Libyan ports. The British got an unexpected reprieve in mid 1941, when the Germans redeployed most of their airplanes from Sicily to Eastern Europe, in preparation for the invasion of Russia, and to North Africa, where Rommel was rampaging against the British.

The Turning of the Tide and Victory

The Luftwaffe returned to Sicily in late 1941, redeploying many of its squadrons from the Eastern Front, where winter had ground most aerial operations to a halt. By then, the British in Malta had been reinforced with better fighters such as the Spitfire, which were more of a match for the German Me 109s. Experience and better training had also improved the quality of Allied pilots, whose numbers now included Canadians, Australians, New Zealanders, South Africans, and Americans.

The difference in the rematch was remarkable. Whereas the British had trouble during the first half of 1941 in downing a single German fighter over Malta, Allied fighters now downed Luftwaffe planes in droves. Allied aces, and then aces of aces, emerged as they notched up kills over the skies of Malta and the surrounding seas. One pilot, Royal Canadian Air Force flight lieutenant George Beurling, who came to be known as “The Knight of Malta”, shot down 27 Axis planes during a two week stretch in July of 1942.

From a threatened island, Malta was transformed into a base for offensive operations against the Axis. By the fall of 1942, two thirds of the Italian merchant fleet had been sunk by planes, ships, and submarines, mostly operating out of Malta, and Axis forces in North Africa were gradually starved of supplies and reinforcements. That precarious condition played a key role in setting the stage for the decisive British victory in the Battle of El Alamein, October 23rd – November 11th, 1942. The surviving Germans and Italians were forced into a headlong retreat, hotly pursued by the victors. They eventually ended up in Tunisia, sandwiched between British forces advancing from the south and east, and Americans, advancing from the west.

With their forces cornered in Tunisia, the Germans and Italians were forced to abandon the Siege of Malta in November of 1942, and focus their efforts on saving their last enclave in North Africa. That was when Malta demonstrated its full potential as a sword thrust into the Axis’ vitals. In December of 1942, Allied air and sea forces operating out of Maltese airfields and ports went on the offensive, and over the next five months, they sank 230 Axis ships – the highest Allied sinking rate during WWII. Cut off from supplies and reinforcements, and under intense pressure on the ground, Axis forces in Tunisia capitulated in May of 1943, netting the Allies a haul of over 230,000 German and Italian POWs. Allied success in Malta ended up playing a key role in ultimate Allied success in the North African Campaign.

Victory had been won in Malta, but it came at a cost. During a campaign that lasted 2 years and 5 months, the Allies lost 716 airplanes, 1 battleship, 2 aircraft carriers, 4 cruisers, 19 destroyers, 38 submarines, and about 2300 airmen killed or wounded. The Maltese lost 1300 civilians killed, thousands more wounded, and 30,000 buildings destroyed or damaged. In 1942, King George VI awarded the George Cross – the civilian equivalent of the Victoria Cross, awarded for acts of the greatest heroism or most conspicuous courage in the face of extreme danger – to the people of Malta.