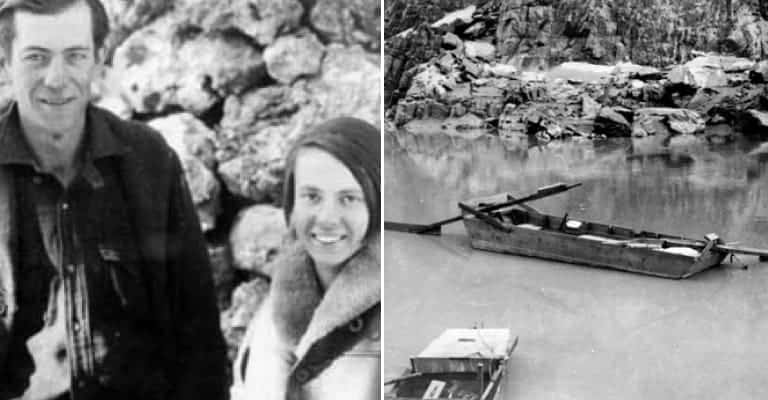 In 1928, a happy newlywed couple went on a white water rafting trip down the Colorado River in the Grand Canyon. One month later, their boat was found fully intact. All of their gear was still in the perfectly preserved boat, including Bessie’s diary. But the couple had disappeared. Their bodies have never been recovered, and there has never been any proof of what happened to them. Fifty years after the fact, new information leads to the possibility that they may have been murdered. However, the clues that are found create more questions than there are answers.

The Honeymoon From Hell

In 1928, newlyweds Glen and Bessie Hyde were on their honeymoon. Bessie was only 20 years old, and she met 27-year old Glen while they were both on a passenger ship on its way to Los Angeles, California. Even though Bessie was so young, she was actually married when she first met Glen. They fell in love, and they eloped just a couple of days after the divorce from Bessie’s first husband had been finalized. When they were married, they were 22 and 29 years old. Despite having a very big age difference, but they shared a passion for exploring the outdoors, and they seemed to share a common dream.

Glen Hyde had a goal of traveling down the entire Colorado River. He spent months building his own 20-foot long boat that would be perfect for the journey. If they could make it down the river and break the time records so that they could win prize money. People who broke these kinds of records in the 1920s became celebrities. They would have gone on lecture tours around the country.

Even if they couldn’t manage to break the time record, since Bessie participated, she would have still gone down in history as being the first woman to complete the entire journey. This was shortly after Amelia Earhart had become famous for her flights. The Colorado River is over 600 miles long, and it is wild and filled with rough white water rapids. It is and incredibly dangerous journey, and yet Glen insisted that he and Bessie should not take life jackets and other safety equipment, because it would add too much weight to the boat and slow them down.

They truly were making record time, so they stopped along the river to meet a photographer named Emery Kolb, who lived in the middle of the grand canyon. He became famous for his work, and a lot of explorers and nature enthusiasts would stop by to say hello. They told Kolb that they had already been going down the river for nearly a month and that they were well ahead of schedule in their progress. They asked Emery Kolb to take their photograph and promised that they would retrieve it on their way back. In the photo, they both look very happy and proud, probably thinking the same picture may be used in newspapers announcing that they had broken the speed record.

Emery Kolb agreed to take their photo. But when he heard about their goals, Kolb told Glen and Bessie that it was far too dangerous to go down the river without life jackets, and he offered to give them some. Kolb also warned them about the cold, too. It was November, so winter weather was going to set in soon, and they would be sleeping outdoors on extremely cold nights. Even though they were making good progress, they still had hundreds of miles left to go, and he did not believe they were prepared to survive the elements. Glen refused to take any of the safety equipment, saying that they were strong swimmers and that it would not be necessary. Emery Kolb was one of the last people to see them alive.

A month later, Glen and Bessie’s families never heard from the young couple. They should have been on their way back through the canyon to pick up their photograph from Emery Kolb, but he had never heard from them, either. They were worried about them, so he asked for a small airplane to fly through the canyon to see if they could find the Bessie and Glen.

The pilot spotted their boat sitting by the shore, and a search party was called in to investigate. The boat was still in perfect condition. Their clothes, food, and all of the other supplies they brought with them were still untouched in the boat. Bessie’s diary was there, and she kept very detailed notes about what happened every day. They were happy notes about making it down the river at record speeds. The couple was well on their way to winning the prize and making history. There was no sign of a struggle or robbery. It was as if they completely vanished into the wind.

The search party spent months combing the surrounding area of The Grand Canyon looking for bodies or any other kind of evidence that may point to Glen and Bessie Hyde’s whereabouts, but they didn’t find anything.

Several years after the disappearance of Glen and Bessie Hyde, a group of men were taking their boats down the Colorado River. They spotted an older woman who was going down the river alone. They invited the woman to join the group, and she introduced herself as Georgie Clark. The rafting tour guide began to tell the legend of Glen and Bessie Hyde around the campfire. The old woman abruptly said that she was Bessie Hyde.

Georgie Clark claimed that she was actually Bessie Hyde and that she stabbed her husband after they got into a fight. Bessie wanted to leave because she felt that the trip had become too dangerous. Glen began to beat her, so she grabbed a knife and stabbed him. This woman said everything so matter-of-factly, everyone around the campfire believed her. One of the men in the group found Georgie Clark’s phone number, and called her afterward to see if she would do an interview to talk about the story. The old woman denied everything, saying that she never claimed to be Bessie Hyde, and hung up the phone.

Of course, if she really was Bessie Hyde, she would have to say this. She confessed to murdering her husband, after all. However, this does not explain why she decided to leave all of their belongings behind in the boat. If Bessie truly did kill Glen, she would have been alone in the middle of The Grand Canyon, miles away from civilization in the middle of winter.

After Georgie Clark passed away, her best friends requested to search her home to look for clues. Clark had also told her best friends that she was Bessie Hyde, and yet she never showed them any proof. Stranger yet, she never let her friends come over to visit her house. When they went through their belongings, they found a mixture of evidence that makes the mystery even more confusing.

Georgie Clark had a birth certificate that said her real name was Bessie DeRoss. They also found a marriage certificate of Bessie and Glen Hyde. In Clark’s underwear drawer, she had a pistol. These three pieces of evidence may be enough for some people to believe that she had been telling the truth. However, all of the photographs of Georgie when she was younger look drastically different from Bessie Hyde. They are not the same person.

So, was Georgie Clark so deep in her lies that she had a fake birth and marriage certificate made? Or, did she steal these documents from Bessie’s boat? Is she actually the murderer? Maybe Georgie Clark was disappointed that she accomplished just as much in the Colorado River as Bessie Hyde, and yet she never seemed to get any recognition for her skills until after she pretended to be someone famous.

A man named Richard Westwood wrote an entire biography on Georgie Clark, and he concluded that while her accomplishments as a solo woman adventurer were incredible in their own right, she was not Bessie Hyde. None of it makes much sense.