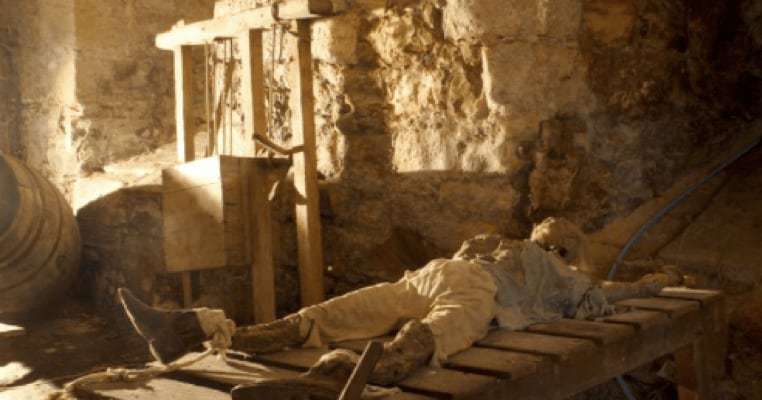 “It’s packed with troubled souls. Far, far too many to deal with. On no account buy this castle.”

Such was the advice given to Sir Humphrey Wakefield by a psychic, just before he purchased his wife’s ancestral seat, Chillington Castle in 1982. The castle, a former monastery, built on the on the border between England and Scotland, had been in the Grey family for 800 years before its abandonment in 1932. In its day, Chillington had been the base of Kings, played a significant role in the conflict between the two nations and hosted the deaths of thousands in its grounds. By 1982, it was nothing but a ruin.

With such a history, it was no wonder Chillington was believed to be one of the most haunted castles in England. Sir Humphrey, however, ignored the advice and purchased Chillington. For over a decade he worked to restore it to its former glory. Now open to visitors, Chillington castle is a major Northumberland tourist attraction, which draws guests with its dark history-a darkness further enhanced when the castle’s restorations revealed yet more of Chillington’s morbid past. So why is the history of Chillington castle so chilling? And is it merely another medieval castle with a bloody past whose reputation has been overhyped for the tourists?

Chillingham was occupied from prehistoric times. During the Second World War, an impromptu excavation in the castle grounds by a German POW uncovering flint and antler arrowheads and axes dating to the Bronze Age. These tools may be evidence of a prehistoric hunting camp. Or it may have been an early manifestation of war. By the Iron Age, local tribes had established a fort at Chillington, on nearby Ross Hill, which overlooks the present castle’s grounds. Perhaps this was the original ‘homestead of Ceofel’ that gives Chillingham its name.

By the 1200s, the conflict was increasing along the borderlands between England and Scotland. Monks had built a house on the land below Ross Hill. This monastery was converted into a fortified manor house with just one tower and a curtain wall. The monarchy placed the new castle in the hands of the Grey family in 1246. The Greys were descendants of the Croys, kin of William the Conqueror. Tasked with holding the border around Chillingham, it was they who turned the manor into a fortress, constructing its dungeons, torture chamber and battlements.

In 1297, the First Scottish War of Independence broke out. That same year, the forces of William Wallace raided Chillington, burning local women and children alive in a church. However, in 1298, Edward I, “the Hammer of the Scots” made Chillington his base for the campaign against Scotland. Chillington’s dungeon began to fill with enemy prisoners- Scottish women and children, as well as soldiers and spies. Legend says that King Edward personally appointed the man who was to deal with them: John Sage.

Sage was supposedly a soldier who had risen through the ranks to become a lieutenant in Edward’s army. When a leg injury forced him to retire from combat, he begged the King to find him a role. So, Edward, had him appointed torturer at Chillington castle. Sage was a sadist and hated the Scots. Over the three years of war, he reputedly tortured some 50 prisoners a week. When the war ended, Sage burnt the remaining adult prisoners alive in the grounds of the castle while their children watched from what is known as the Edward Room or Killing Room. Sage later hacked these children to death with an ax still displayed in the castle.

In all, 7500 Scottish prisoners reputedly died at Chillington; their bodies dumped into its lake. John Sage also met his end at Chillington. One evening, Sage killed his lover Elizabeth Charlton, strangling her during a sex game on the rack in Chillington’s torture chamber. Unfortunately for Sage, Elizabeth’s father was a leader of the powerful border reivers, outlaw gangs who plagued the borderlands but were vital to the fight against the Scots. To avoid losing the Reivers to the enemy, Edward I handed Sage over to justice. He was sentenced to hang at Chillington but was torn apart while he still lived. Others would soon join Sage’s ghost and those of his victims.

In 1344, Edward III issued a license to crenelate to Sir Thomas Grey. The license was not a thing awarded lightly by the King as a fortified castle could be used against the crown as well as fight for it. Allowing the Greys to thoroughly fortify Chillington was a statement of confidence in their loyalty- and in Chillington’s vital role in defending the border region. The castle’s curtain wall became a quadrangle some ten feet thick. The Grey’s also added towers and a moat- just in time for the Scottish invasion of 1345, led by King David II.

Chillington continued as the guardian of the border regions for the next 200 years. Although the Grey family was split in their loyalties during the War of the Roses, the Lord of Chillington always stood by the crown. This support continued during the northern uprising of 1537, known as the Pilgrimage of Grace. By the reign of Elizabeth, Chillington’s role had become more diplomatic. Its Lord, Ralph Grey, was godson not only of Lord Burghley, Elizabeth I’s chief minister but the Queen herself. Grey helped smooth passage of Scotland’s King, James VI, to the English throne by acting as a go-between- and playing host to the King himself on his journey south to his coronation.

It was at this time Chillington began to take on the more comfortable and refined aspect of a country house. Yet its walls still hid dark secrets. In the nineteenth century, renovators uncovered the skeletons of a man and a child hidden near a trap door to the underground vaults. It was believed they might have been the forgotten victims of a border Reiver attack. Other renovations revealed 100 Tudor documents hidden in a walled up fireplace. The documents related to James VI’s succession. However, they chime curiously with another find made in the Castle’s Pink Room during the 1920’s.

During work in the bedroom, the skeleton of a young child was found bricked up in the wall. The bedroom long had a reputation for being the haunt of a spirit known as the Blue or Radiant boy. The child manifested itself with cries of fear or pain followed by a bright, radiant glow around the figure of a young boy dressed in blue clothes. The radiant boy had supposedly discovered documents in the castle relating to the Spanish Invasion of 1588. Legend told that he was bricked up alive with the papers to ensure his silence.

The body in the Pink Room was reputedly dressed in scraps of blue cloth- and showed evidence of having attempted to scratch his way out of the wall. Whether or not the child died in the exact circumstances described by the legend cannot be known. But his walling up speaks of yet more dark goings-on in within Chillington’s walls.

The growing peace in the borderlands during the seventeenth and eighteenth centuries completed Chillingham Castle’s evolution into a country house. Capability Brown designed landscaped gardens to surround the castle and its new east wing. In 1832, the King of France, Louise Philippe stayed at Chillingham and gifted the owner with garden urns from Versailles. However, by 1932, the Greys had left the Castle as the costs of running Chillingham became too high, leaving the castle to its ghosts, until its rescue at the end of the twentieth century.

Ghost stories of Chillington in this gentler period continue to manifest. One notable spirit is the ghost of Lady Mary Berkley, the wife of Lord Grey of Wark and Chillingham who in 1682 ran off with his wife’s sister, Henrietta. Lady Mary was left alone at Chillingham with her baby daughter. She died in the castle in 1710, and her ghost reputedly remains there still, signaled by a rustle of silk and an eerie chill.

But how real are Chillingham’s ghosts? American heiress Leonora Van Marter, who married George, Earl of Tankerville in 1895 certainly seemed to believe in them. The new Countess was a keen believer in the spirit world and claimed to have experienced many of Chillingham’s spirits herself, capturing their stories in a pamphlet published in 1925.

However, Chillingham’s reputation as Britain’s most haunted castle seems to stem from its current owners. And despite its undoubted turbulent history on the borders of England, some of Chillingham’s more bloody tales are difficult to verify. For although much of the castle’s history is well documented, the character of John Sage, for instance, is not. Nor are the exact number so those who died within Chillingham’s walls. It could be that in reality, Chillingham’s history is no more horrific and bloodstained than any other castle fortress in England, such as the Tower of London or Warwick castle.

However, the mysterious finds of bodies in the castle remain as a testimony to the grim goings-on, no matter how undocumented. Then there are the reports and photographs of visitors to the castle and paranormal investigators. Maybe these are fakes, flukes or the workings of overworked imaginations. Perhaps, as the early nineteenth-century poet Longfellow said of Chillingham:

“All houses in which men have lived and died are haunted houses:
Through the open doors, the harmless phantoms on their errands glide,
with feet that make no sounds upon the floors.”

Or perhaps there is something to the reputation of Chillington Castle after all.

“Believed to be the most horrific place in Europe, the Chillingham Castle has seen many wars, deaths, and tortures since the 12th century”, Brad Smithfield, The Vintage News, January 11, 2018.