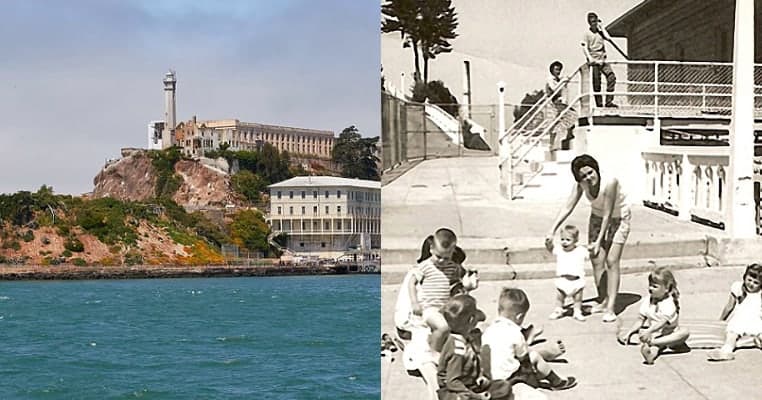 Just outside of the city of San Francisco, Alcatraz Island sat in the middle of the bay, and served as a federal prison for 29 years. It was considered nearly impossible to escape, and it housed some of the world’s most notorious criminals, like Al Capone. For many, the idea of ending up on this island was a nightmare, and the prison is supposedly haunted by the souls of the people who were trapped behind bars. However, few people have heard the story about the children who grew up on the island and called Alcatraz “home”.

Work and Family Life Was Ideal on Alcatraz

Alcatraz had as many as 300 convicts living in the prison at any given time. Supplies were delivered periodically to the island to help support the lives of the convicts and the employees living there. It was possible for employees to leave by boat, but it was mostly a self-sustained place. Many prison employees volunteered to live on the island full-time in exchange for discounted rent of just $18 a month. Even with modern inflation, that is like $200 per month for multi-million dollar views of the San Francisco Bay. It was a far shorter commute as well, and young families could save their money for the future once they moved. This was shortly after The Great Depression, so for many families, the opportunity to live on Alcatraz was a dream come true. Even back then, the cost of rent in San Francisco was normally very expensive.

Over 100 children were living on the island, and many of them grew up together from the time they were infants. There were even babies born there, with their birth certificate saying “Alcatraz Island” as their place of birth. Everyone knew each other’s names, and the kids had tight-knit group of friends that felt more like family. All of the children had to take a boat on and off the island in order to attend school in the city of San Francisco, so the groups of kids going to class back and forth probably felt more like cousins or siblings than neighbors as they went on their trips back home.

The island had three-story apartment buildings, duplexes, and even private cottages. Even though they were not far from hundreds of convicted felons, the residents still never locked their doors. After all, prison guards and police officers were all over the place, and the bad guys were behind bars. In a way, it was almost safer to raise a kid on this island than it would be in the outside world.

There were not big lawns of grass on the island, so kids spent most of their time roller skating down the roads that only had the occasional vehicle driving on it. They played baseball, flew kites, and raced bicycles. Some of the kids even raced one another in a soap box derby, and they took the competition very seriously. There were also big game rooms with pool tables and a jukebox where some of the older kids would hang out. There was a strict rule that the kids were not allowed to play with toy guns or play games like “cops and robbers” (for obvious reasons) but parent managed to sneak them in, anyway, and they would play in the privacy of their own homes. As the years went on, some of the officers bought color TV’s, and kids were glued to screens to see their favorite Saturday morning cartoons.

Two-thirds of the island were restricted, meaning that the civilians were not allowed to enter the areas where the prisoners lived. While civilian adults feared going there and mostly, kept their distance, the kids saw it as a challenge. They would climb the rocks to try to see if they could sneak a peek inside of the fences. There were guards who could see them, of course, and would let it slide, so long as the kids weren’t actually getting into any trouble.

One former resident named Bob Orr grew up there from 1941 to 1956. He would encourage his friends to sneak out to camp on the beach. This was strictly against the rules, of course, but the kids managed to do it anyway. To them, it was like a summer camp that lasted forever, and they made a huge group of lifelong friends.

The Friendliest Neighbors Anyone Could Ask For

Convicts that were in prison for non-violent offenses did a lot of jobs for the families living on the island, like cleaning their laundry, picking up trash, and doing the landscaping. Every time there was a need for a handyman to do plumbing or electrical work, the convicts did that, too. So, not only were the parents getting cheap rent, but they were also getting almost all of their household chores done for free. It was so normal, the kids didn’t think anything of it. Many of the mothers became best friends, and they even took turns cooking dinner for one another. Friends would go over each other’s houses nearly every night of the week, which reduced the amount of time wives spent cooking.

One child who grew up on the island, Joyce Ritz, told Reuters that her shoes were repaired by Al Capone, and that he signed his name on the bottom of her leather sole. She wore the shoes every day to school, and threw them away when they got too old. Now, as an adult, she kicks herself, knowing that they would be worth a fortune today. Some of the kids kept momentos from their stay, like watercolor paintings and other artwork made by the prisoners.

Kids would see these men going about their daily duties, and wave to them. Every so often, they would even have short conversations or help them load garbage into the back of trucks, but the prisoners would usually move along. It was like seeing the garbage man, or the milk delivery driver. As far as the kids were concerned, they were just men just doing their jobs, and there was nothing to be afraid of.

Families were free to come and go from Alcatraz Island as they pleased to go into the city of San Francisco, but police officers might find it hard to believe that a wife and kids wanted to get on a boat to the prison. This is why every single member of the family had to get a special dog tag that proved they lived on Alcatraz. The ferry went back and forth from the island, and the last boat left San Francisco at 11:30 PM. Nearly everyone obeyed this rule, except for one story when an officer’s teenage daughter went on a date in the city. She miss the last boat, and ended up calling her father, crying. With no place to stay for the night, the ferry captain was ordered to turn the boat around and make one last trip for the teen girl. Obviously, this would have been an embarrassing story that the rest of the kids would have giggled about, knowing not to ever make the same mistake.

The prisoners themselves were said to have a very relaxed atmosphere inside the walls, too. They had open mic nights where they could play guitar and sing, game nights, and good meals. So the convicts were not exactly being tortured. One boy named Ed Faulk recalled that a prisoner his sister spotted one of the inmates, and called him “Pop’eye”, because he looked like the cartoon character. He called her “Olive Oyl”, and later found a ball to toss to her as a gift.

In 1946, convicts got ahold of guns, and there there was panic inside of the prison. Two guards were killed, but everything remained calm and safe in the residential areas. The kids were never in any danger, but the event was enough to suddenly make the reality of living in a prison feel more real. After that year, the kids stayed farther away from the prison, and did not try to become friends with the convicts anymore.

The End Of An Era

Back in the 1940’s and 50’s, the laws around sanitation and littering were nothing like they were today. Sewage and garbage were simply dumped in the San Francisco Bay. It wasn’t a huge concern for the people living there, though. Everyone who lived there loved fishing on the island. They did not need a fishing license, and there were no restrictions to how many fish they caught in a single day. Men would bring in enough to feed everyone living on the island. Today, they would never be allowed to do any of this, and it would cost a fortune to keep up with EPA regulations.

Alcatraz closed on March 21, 1963. By that time, most of the fathers had gotten jobs at other prisons, and moved off the island years before it was finally ready to shut down for good. Some of the fathers decided to leave in order to serve in World War II, as well.

However, there were some that stayed until the very end. Many of the kids who grew up on Alcatraz didn’t want to leave. Some of them even returned to the prison to work there as tour guides when it was open to the public. However, many of the residential areas were torn down, and many of the houses and apartments no longer exist. But the memories lived on. The kids who grew up there say that when they meet someone new, it’s easy to make friends, because saying “I lived on Alcatraz” is a real conversation starter. 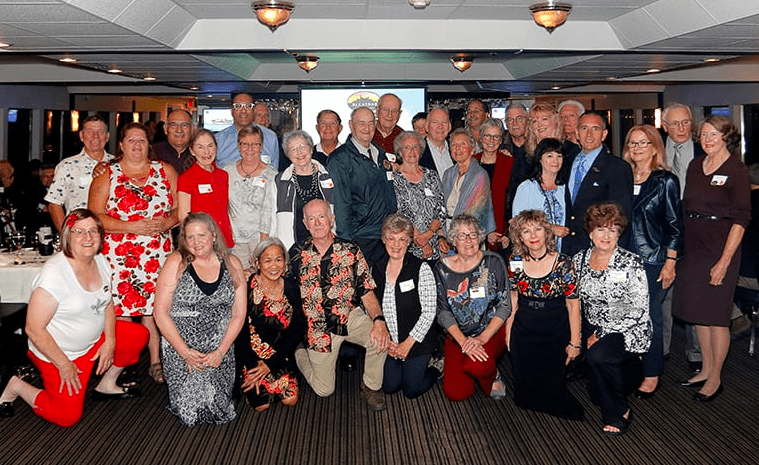 The people who grew up on the island loved it so much, they decided to hold “Alumni Reunions” once a year, which is really more like a family get-together. With the population growing older and moving to various parts of the country, the number of people attending the reunion went from over 200 people down to only 20. Many of the remaining members would go back only to meet people who would ask them the same questions over and over again, like “Did you meet Al Capone?” They decided that 2018 would be the final year to travel to Alcatraz to see one another, and simply keep in touch and remain friends in San Francisco, instead. Many of the former residents still have fond memories of Alcatraz island as their almost utopian 1950’s home town. They say that if they had the opportunity to move back to Alcatraz, they would.

Children Who Once Called Alcatraz Home: ‘For Us, It Was a Big Playground.’ Caitlin Nolan. Inside Edition. 2018

Children Who Grew Up on Alcatraz. Inside Edition. YouTube. 2018.