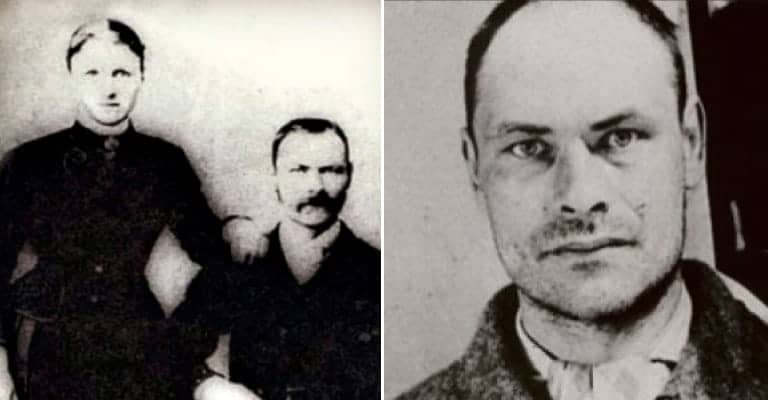 On March 22, 1895, constables found the charred remains of a woman’s body in a shallow grave in the corner of a boggy field near Ballyvadlea near Clonmel in Southern Tipperary. The torso was severely burnt and naked, except for a few remaining scraps of cloth from the victim’s undergarments- and her black stockings. However, her head was covered with a sack. When they removed this, the police found themselves face to face with the undamaged face of missing cooper’s wife, Bridget Cleary.

Bridget had vanished from her home in the middle of the night some days earlier. However, over a period of some weeks, the pretty and forthright twenty-six-year-old dressmaker had been suffering from a severe chill that had kept her confined to bed. However, unusual stories about Bridget and her illness were circulating in the district. For many people were murmuring that Bridget Cleary was with the fairies.

Several members of Bridget’s family- including her husband and father- were charged with her ill-treatment and murder. The subsequent trial revealed a story of changelings and fairy abductions. The question is, was Bridget Cleary, the tragic victim of superstition? Or was there another motive for her murder?

The Life of Bridget Cleary

Bridget Cleary lived her whole life in Ballyvadlea, a small townland near Clonmel in Southern Ireland. By 1891, the little settlement consisted of just nine dwellings housing a population of 31. Like many of the residents, Bridget’s father, Patrick Boland was a local farm laborer. However, he and his wife, who was also called Bridget ensured that their only daughter and youngest child acquired a good trade- and means to support them in their old age. So, after an education with local nuns, the young Bridget Boland was apprenticed to a dressmaker in Clonmel, eleven miles away.

Bridget’s occupation was a good one for a woman of her class and time. It was well paid and allowed the already pretty teenager to stand out amongst her peers in terms of independence- and style. Bridget’s looks and individuality meant she attracted plenty of jealous looks – but also plenty of male admirers. So it was some surprise when Bridget elected to marry at a very early age to a most unlikely man. For in 1887, just as she had completed her apprenticeship, the eighteen-year-old married local Clonmel cooper, Michael Cleary.

Cleary seemed a strange match for Bridget. For a start, he was nine years older than his young bride. Then there was the difference in their characters. For Bridget was lively and independent, while, Michael was rather dour and sullen. More unusual still was the fact that for some years after the marriage, the couple lived apart, only seeing each other on weekends. Instead of living with her husband in Clonmel, Bridget moved back in with her parents in Ballyvadlea. These unusual living arrangements may have been because Bridget’s mother was ill and she was needed to help nurse her. However, by the early 1890’s Cleary had made a move to Ballyvadlea – rather than have his wife come to him.

In 1891, the Clearys and Bolands took a step up in the world when they moved into a new laborer’s cottage not far from the house of Bridget’s paternal aunt, Mary Kennedy and that of her cousin, Mary’s daughter Johanna Burke. The slate-roofed cottage was a far cry from the homes of the Burke’s and Kennedys. There was just one problem: it was built on the side of an old rath, a fairy fort.

Even in the late nineteenth century, rural Irish rural communities maintained strong beliefs in the fairies that provided a way of rationalizing life’s misfortunes. People believed that illness and misfortune would visit anyone who offended these invisible neighbors. Fairies would even go so far as to steal away adults or children and leave in their place a facsimile of the missing person; a changeling. These changelings were often sickly and vague and often died soon after their appearance. Living on a rath was likely an odd choice, as it was the location for fairy gatherings. It was rumored that the previous tenants of the cottage had been driven away… by local fairies angry that anybody dare trespass on their territory. So would the Clearys fare any better?

“That is Not Bridget Boland”

Bridget not only lived on a fairy rath, but she also had cause to roam other parts of the countryside associated with the fairies. Since her marriage, Bridget supplemented her dressmaking income with the sales of eggs from hens, the money from which she collected monthly. Part of her egg round took her onto Kylenagranagh Hill, another local fairy fort. The hill was the home of one of her customers, Jack Dunne, who was a Shanachie – a custodian of the ancient lore.

March 1895 was bitterly cold- and Bridget caught a chill that confined her to the cottage for several days afterward. However, for some reason, the usually healthy woman did not throw off the illness but instead became steadily worse. Various friends and neighbors called round to see how she was. However, when Jack Dunne came to visit, he took one look at the wane and disheveled figure in the bed and declared “that is not Bridget Boland.”Michael Cleary, Bridget’s husband, overheard. From then onwards, he became convinced that the woman in the bed was not his wife – but a changeling.

Ignoring the medicine and diagnosis of the local doctor, Cleary tuned to Jack Dunne who recommended he visited Denis Ganey, a local ‘Fairy Doctor.’ Ganey did not visit Bridget himself. However, he did give Michael Cleary a herbal mix with ‘the nine cures in it’ to be administered to the patient, mixed in new milk. This cure was a standard one in cases of changelings and designed to restore the real individual. As many contained foxglove, the concoctions were more likely to finish the patient off. However, other methods could be used to identify and exorcise a changeling including harsh, persistent questioning and the threat of fire. All of these methods were used on Bridget Cleary on March 14, 1895.

Just before ten that night, William Simpson, a local landowners caretaker, and his wife Minnie went to visit Bridget. When Michael Cleary finally allowed them into the cottage, a fearful scene greeted them. Jack Dunne and her cousins Patrick, James, and William were holding a weak and distressed Bridget Cleary on the bed. Bridget’s aunt, Mary Kennedy waited nervously by the door while Michael Cleary forced his wife to take the herb-laced milk. Bridget was screaming and complaining it was too bitter. However, Cleary held Bridget’s mouth shut to force her to swallow, intermittently demanding if she was Bridget Cleary or Bridget Boland, wife of Michael Cleary, in the name of God.’

The Simpsons noted that there was a large burn mark on Bridget’s forehead caused by a poker that had been used to threaten her earlier. The harsh questioning continued, and Bridget was drenched three times with “a noxious fluid” that was probably urine. After the third dose of herbs, the men lifted her out of bed and shook her back and forth before Jack Dunne ordered them to “make a good fire and we will make her answer.” Bridget was then carried to the grate and held over the flames while her father asked her: are you the daughter of Patrick Boland, the wife of Michael Cleary” “I an Dada” Bridget said, in a voice made loud with terror.

After the rites of March 14, Bridget was put back to bed. However, according to Michael Cleary, during the night of March 15, she disappeared. The police became suspicious, and a search began for the missing woman. Over the coming days, informants came forward with tales of ill-treatment. Warrants were prepared for the arrest of Michael Cleary, Patrick Boland, Mary Kennedy, and her sons, John Dunne and Denis Ganey- even before Bridget’s body was found. Finally, in June 1895, a court in Tipperary discovered what had happened to Bridget Cleary.

On March 15, the Clearys again had visitors. One was Joanna Burke, who came to see how her cousin was. However, Joanna and Michael Cleary began to argue. So Cleary forced Bridget out of bed, ordered her to dress and sent her to the kitchen to settle matters. All was not well between the couple. When Bridget was asked how she was, she replied she was only ‘middling’ as her husband was trying to make ‘a fairy of her’. Cleary then told her to ‘hold her tongue.’ He became more and more agitated and began to ask Bridget again if she was his wife. Then he hit her.

Cleary then lost control. He tore off Bridget’s clothes, only leaving her in her chemise. As he brandished a brand from the fire in his wife’s face, his guests tried to flee. Instead of letting them go, Cleary threatened them and locked the door. Frightened, the company sought refuge in the bedroom. There they heard Bridget scream ‘give me a chance’ before her head struck the floor. There was then another scream. William Kennedy gathered enough courage to investigate. He quickly returned. ‘Bridgie is burned,’ he said. Whether by accident or design, Cleary had set his wife’s chemise alight. He then poured paraffin over Bridget’s body, sat in a chair and watched her burn.

The court acquitted Denis Ganey and Mary Kennedy. It then sentenced all but one of the defendants for wounding. Michael Cleary, however, was found guilty of manslaughter. He was sentenced to 20 years penal servitude. After fifteen years, Cleary was released. He immigrated to Canada, never to be heard of again. The fact that most of the defendants were illiterate and steeped in an older, traditional lore does make it credible that they at least believed their actions were helping Bridget. Michael Cleary, however, was literate and had been part of a more modern world. Did he believe his wife was a changeling?

Perhaps lack of sleep clouded Cleary’s judgment. However, there are signs his marriage was in trouble. Firstly, there was the level of violence used by Cleary against Bridget. Then, there was the testimony of Bridget herself. While she was ill, Bridget told her aunt that Cleary had been ‘making a fairy’ of her for months. She also claimed ‘he thought to burn me about three months ago.’ After the burning, Cleary disappeared for three days, supposedly waiting for the real Bridget to reappear out of Kylenagranagh hill. However, this was not his first impulse after his wife’s death. For initially, Cleary talked of feigning madness, fleeing to America or killing himself. This suggests Michael Cleary did not believe he had a changeling bride; he merely hoped by claiming he had one, he would be absolved of murder.