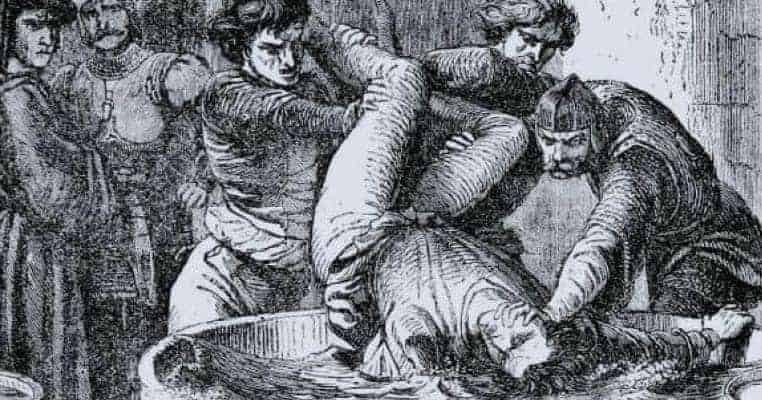 Cade’s Rebellion was symptomatic of a general collapse of royal authority, fueled by rivalries between different branches of the Plantagenets, that would ultimately spell the dynasty’s doom. The Plantagenets had been prone to fighting each other since the dynasty’s founding – Henry II, the dynasty’s founder spent much of his reign warring against his wife and sons. The dynasty survived those earlier travails, but it would not survive another bout of intra-dynastic bloodletting, that began in the 14th century.

It was triggered by the tyrannical rule of king Richard II, last seen in the previous entry, suppressing the Peasants’ Rebellion with no small dose of nastiness. From a nasty teenager, Richard grew into a nasty customer as an adult, and he proceeded to surround himself with corrupt officials, and rule in an arbitrary and capricious manner. That led to an uprising by many lords, including some of the king’s Plantagenet relatives, who seized power.

In 1386, the rebels formed a committee known as the Lords Appellant, which governed the realm and reduced Richard to a figurehead. A Parliament, which became known as the “Merciless Parliament”, was called. It impeached several of the king’s favorites, confiscated their property, and ordered their execution. Richard bided his time, and slowly rebuilt his power. Then in 1397, he struck back, reasserted his authority, and executed the most prominent Lords Appellant.

One of Richard’s opponents had Henry Bolingbroke, Richard’s cousin and the son of his uncle, John of Gaunt, 1st Duke of Lancaster. John of Gaunt had supported Richard and helped him regain power, and acted as intermediary between the king and his opponents, including Gaunt’s own son. However, John of Gaunt died in 1399, and Richard decided to settle scores with his son. So he disinherited Henry Bolingbroke, declared him a traitor, and banished him for life.

Bolingbroke did not stay in exile for long, however. He returned a few months later, raised a rebellion, and proceeded to defeat and depose his cousin. Richard II was captured, and quietly murdered. Henry Bolingbroke had himself crowned as Henry IV, and founded the Lancastrian branch of the Plantagenets. The Lancastrians would rule England until the crown was disputed by the Yorkists – Plantagenets descended from John of Gaunt’s younger brother Edmund, Duke of York – in the Wars of the Roses.

The Wars of the Roses, the Kingmaker, And Deadly Brotherly Rivalry

Richard Neville, 16th Earl of Warwick (1428 – 1471), was one of the most powerful nobleman of his era, and a capable military commander during the Wars of the Roses between the Yorkist and Lancastrian branches of the Plantagenet family. He began the conflict on the Yorkist side, but then switched his support to the Lancastrians, and his role in deposing two kings earned him the epithet “Warwick the Kingmaker”.

The Wars of the Roses began when Richard, Duke of York, supported by the Nevilles, attempted to seize the crown from his cousin, the mentally incapacitated king Henry VI. However, the Duke of York and Warwick’s father were slain in battle, and the struggle passed on to the next generation of Yorkists, including Warwick and the Duke of York’s son, Edward.

Warwick was instrumental in securing victory for the Yorkists, who crushed the Lancastrians at the Battle of Towton in 1461. Henry VI was deposed and imprisoned, and his place was taken by the slain Duke of York’s son, now crowned as Edward IV. The new king was a great warrior, but was uninterested in government, so Warwick governed the realm on his behalf.

The relationship soured because of Edward’s impulsive marriage to a commoner. That ruined years of painstaking negotiations by Warwick for a treaty between England and France, which was to have been sealed by Edward’s marriage to a French princess. Things came to a head in 1470 when Warwick, aided by king Edward’s younger brother, George, First Duke of Clarence – who had married Warwick’s daughter and thus became his son-in-law – deposed Edward. The Yorkist king was forced to flee England, while the deposed Lancastrian Henry VI was released from imprisonment, dusted off, and restored to the English throne.

Warwick’s triumph was short lived, however: Edward returned to England in 1471, and raised a counter rebellion. At a critical moment, Warwick was betrayed by his son in law, George, Duke of Clarence, who had a change of heart and defected back to his brother, Edward. The two sides met in the Battle of Barnet in April of 1471, a Lancastrian defeat in which the Kingmaker was killed.

Another and final Yorkist victory at the Battle of Tewkesbury the following month confirmed Edward IV’s restoration to the throne. The unfortunate Henry VI was quietly murdered to eliminate the possibility of further trouble from Lancastrian loyalists. And to be thorough, Henry VI’s only son, the teenaged Henry of Lancaster, was also killed.

As to the wishy-washy George, Duke of Clarence, he continued to demonstrate his ingratitude to his elder brother. Understandably, that irked Edward IV, who had made his younger brother a duke in the first place, then made him Lord Lieutenant of Ireland at age of 13, only to see his generosity get repaid with multiple conspiracies. When the Duke of Clarence was caught conspiring once again, an exasperated Edward finally had enough.

The king imprisoned his younger brother in the Tower of London, and tried him for treason, personally conducting the prosecution before Parliament. George was convicted, attainted, and sentenced to death. On February 18th, 1478, the Duke of Clarence was executed by getting dunked into a big barrel of Malmsey wine, and forcibly held under until he was drowned.

The Plantagenet era ended on the afternoon of August 22nd, 1485, at the Battle of Bosworth, due to one of history’s most momentous betrayals. The traitor was Thomas Stanley, First Earl of Derby (1435 – 1504), a powerful peer who ran his extensive landholdings in northwest England as if they were an independent realm. Accordingly, his support was sought by both the Lancastrian and Yorkist branches of the Plantagenet dynasty during the Wars of Roses.

The Yorkist King Edward IV died in 1483, having named his brother Richard regent during the minority of Edward’s 12 year old son and successor, Edward V, and guardian of the child king and his younger brother. However, Richard declared his brother’s sons illegitimate, and imprisoned his nephews in the Tower of London, where they disappeared and were likely murdered. He then had himself crowned as king Richard III.

The new king was challenged by Henry Tudor, the last viable male descendant of the competing Lancastrian line, who landed in England in 1485, after years of exile. Richard gathered his forces, which included a large contingent commanded by Thomas Stanley, a major Yorkist loyalist and supporter, and marched out to meet his challenger.

Stanley was conflicted: his family had been Lancastrians, but he himself had defected to the Yorkists. He was handsomely rewarded by the Yorkists for that betrayal with lands and estates, and appointments to powerful government positions. So he was deeply indebted to the Yorkists. However, he also happened to be married to Henry Tudor’s mother, so he was the Lancastrian challenger’s stepfather.

That stuck Stanley between the rock of loyalty, and the hard place of peace at home. So he decided to play both sides, and secretly contacted his stepson to explore defection. However, king Richard got wind of that, and seized Stanley’s son as a hostage for his father’s good behavior, and insurance against treachery. He then ordered Stanley to join the Yorkist army with his contingent, which the earl reluctantly did.

Richard III and Henry Tudor met at the Battle of Bosworth on August 22nd, 1485, but Stanley was still undecided. So he kept his contingent to one side of field, while waiting to see which side looked like a winner. Richard sent Stanley a message, threatening to execute his son unless he immediately attacked the Lancastrians, but the earl coolly replied: “Sire, I have other sons“.

A livid Richard ordered Stanley’s son executed, but the order was not immediately carried out, and before long it was too late. As the afternoon wore on, Stanley made up his mind that king Richard was losing the battle, so he ordered an attack – against Richard and the Yorkist forces. That decisively tipped the scales in favor of Henry Tudor, and against Richard III, who launched a desperate attack seeking to reach and cut down his rival, only to get cut down himself.

After Richard’s death, Stanley found his fallen crown in some bushes, and personally placed it on the head of Henry Tudor, henceforth Henry VII. Stanley’s stepson and new king of England brought the Plantagenet dynasty to an end after centuries of rule and replaced it with his own Tudor dynasty. As to Stanley, treachery paid, and he was handsomely rewarded by his son-in-law for his betrayal of Richard.

ThoughtCo – Wars of the Roses: An Overview

Unofficial Royalty – The Sinking of the White Ship, and How it Affected the English Succession