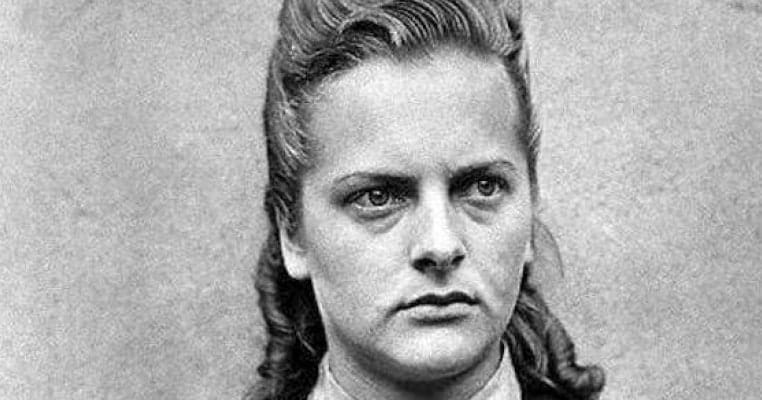 Most rebellious teenage girls who rebel against their parents will do relatively harmless things like skipping class, date questionable boyfriends, or maybe even smoke cigarettes and drink alcohol with their friends. But in the wake of Germany’s Third Reich, a troubled young woman named Irma Grese decided that she was going to join the Nazi party. During her time working for the Nazis, she was sent to multiple concentration camps. Belsen beat and tortured prisoners within an inch of their lives, and allowed thousands of innocent women to die on her watch. During her final days, she was labeled as one of the most evil SS Officers in all of World War II, and she was one of 45 people to answer for her crimes at the Belsen Trial. But for years, her reputation precedes her as “The Beautiful Beast”.

As a girl, Irma Grese grew up with 4 other siblings. Her father was a milkman, and he lived up to every single bad joke and cliche, because he had an affair with the pub owner’s daughter. He abandoned his wife and children in order to be with his new lover. Irma, her mother, and siblings were all left in poverty without any ounce of support. When the rest of the town found out about the milk man’s affair, Irma was bullied mercilessly in school, and she was mocked and beaten up by other kids.

Irma dropped out of High School as soon as she was old enough, so that she could escape the daily torture. She wanted to escape the reputation of her parents, and start a new life of her own. Since she had no one to support her, she had to find a job. At first, she wanted to become a nurse to help aid German soldiers, but the fact that she left her education early meant that she could not possibly qualify for a medical job, and failed most of the written exams. She began working on a farm, and also worked in a local shop to earn some pocket money.

Irma’s mother could not survive any longer with the bad luck life had given her, so she opted to commit suicide. All of her teenaged children to fend for themselves, so Irma joined the Hitler Youth, because it promised her a place to stay and food to eat. She became an official part of the Nazi Party just one year later, at 19 years old. In a way, this may have been her one and only choice to make, considering the circumstances she was born into. Under Nazi Germany, the Hitler Youth normally recruited 10-year old boys when they were in school, and anyone who was already a teenager after the start of the war did not have to join if they did not want to. But the organization was seen as a sort of brotherhood that helped one another, and Grese probably saw a lot of potential in that as a surrogate family that would take care of her.

As a woman, Irma Grese could have stuck with working a desk job, if all she wanted was survival. But the Nazis allowed Irma to channel all of her rage by terrorizing Jewish people as an outlet to her pain. They gave her a job at the Ravensbruck Concentration Camp to see what kind of skills she had. She began to rise in the ranks very quickly, because she was showing her willingness to learn about all aspects of running a camp.

Irma Grese arrived to work in Auschwitz in March of 1943. She started out as the secretary for her block leader, and mostly just answered the phones. She let the higher-ups know that she had bigger ambitions than being just a secretary, so was put in charge of the Punishment Party for two days. Her job was to monitor the Jewish prisoners as they went on “parade”. There were two purposes for these parades. When prisoners first arrived at the camp, they were made to run, and anyone who fell during the run was chosen to be executed, because they were too physically weak. The second purpose of a parade was to strip them naked and herd them into the gas chambers. If any of the prisoners tried to run away, officers like Irma Grese would pull her revolver on them, and beat them with a whip to get them to go back in line. Even though she had never done something like this before in her life, she was channeling all of her hate into these Jewish people, and assisted in their deaths without remorse. The Nazis were shocked, and quite impressed, and they knew that they had a promising young S.S. Officer on their hands.

Torture, Starvation, and Death Become A Way Of Life

The higher-ups in Auschwitz could see that Irma Grese wasn’t just some dainty woman destined to make coffee. She showed a lot of promise, and would eventually be called nickname like “the beautiful beast” and “the hyena”. Despite her young age, she was assigned to become the new warden of the Bergen-Belsen concentration camp in northern Germany. As one might imagine, Bergen-Belsen was an all-female camp, so it would only make sense to have a tough woman in charge of the prisoners.

The camp was called a “residence camp”, and they claimed it simply provided housing to these prisoners of war. The camp held tens of thousands of prisoners who were Jewish, Roma, disabled, and lesbians. They were very short on water, food, and supplies. Even though these women were not doing a lot of hard manual labor like in many of the work camps, they would die quickly from a lack of resources. There were very few bathrooms, and disease was spreading rapidly. Thousands of women died every month, so mass graves were scattered around the camp for everyone to witness.

Once Irma Grese became the warden, she gained a reputation for being absolutely brutal and unforgiving to those who stepped out of line. Prisoners who survived living in Bergen-Belsen claimed that she would kick the prisoners as hard as she could with her steel-tipped leather boots, and let her guard dog loose to attack the women. She also used a whip and any other club or weapon she happened to have on-hand to beat the female prisoners whenever she felt it was necessary. Women were made to hold large boulders above their heads for extended periods of time as a form of torture. They say that when the train arrived with new prisoners, she would find the most beautiful female prisoners and choose them to die first, likely out of jealousy.

One of the camp survivors, Alice Lok Cahana, said, “Bergen-Belsen was Hell on Earth. Nothing in literature could ever compare to what it was.” She described people screaming for water, and the poorly constructed houses prisoners were expected to live in. Floorboards will give way, and people would break their legs. Straw mattresses were rotting, and the beds were falling apart. At the end of all long day, women would try to get some sleep, and the wood ended up snapping and collapsing on the floor.

When the Allies liberated the Bergen-Belsen camp, everyone in the administrative offices began burning their files to destroy the records of their crimes. There were so many mass graves of dead women, they had no choice but to get giant bulldozers to clean up the remains of all of these people. The most famous prisoner who died in Bergen-Belsen was a young woman named Anne Frank. Her body was most likely scooped up among all of these other nameless bodies, but not all of them were so lucky as to leave a diary of their lives behind.

Irma Grese Answered For Her Crimes At The Belsen Trials

There were several women who became high-ranking officers at concentration camps, but Irma Grese was the youngest and most beautiful of them all. There were rumors that she had affairs with multiple high-ranking Nazi officers, including Joseph Mengele, and this was one of the many reasons why such a young girl had been allowed to become a warden of an entire concentration camp.

During her career as the warden, Irma Grese received a thoughtful gift from yet another Nazi woman living in a concentration camp; Ilse Koch. Just like Irma, Ilse Koch had gotten into the Nazi party early, and she was able to enjoy running the Buchenwald camp with her husband. She was known for sending fellow concentration camp wardens lampshades covered in human skin, decorated with the tattoos of the prisoner who died to make the household trinket. Irma Grese enjoyed this morbid gift so much, she wrote to Koch to ask if she could have two more to match. It was clear that Irma Grese was fully aware of all of the death, disease, and torture all around her.

After World War II was over, Irma Grese was just one of 45 Nazi employees arrested by Allied soldiers at the Bergen-Belsen camp. They all had to give their testimonies at The Belsen Trial. Newspapers took notice to her, especially, because she her youth and beauty was completely unexpected. Newspapers printed stories about her with catchy nicknames. When photographers tried to take her picture, she refused to look at them, as a form of defiance. In many of the photographs of her, she is looking off to the side, because it was all she could do to try to ruin the picture.

There were some witnesses during the Belsen Trial that claimed to have never seen Irma Grese beating any of the prisoners, except when they stole food. Others went over very gory and horrific details about the torture that she inflicted on her prisoners. Grese claimed that she did carry a revolver with her, but that she never used it. She said that she never owned a dog, and that if anyone stole food, they only got a stern talking-to. According to her, she was a perfectly reasonable and downright sweet warden who never did anything wrong.

When questioned about her time in Auschwitz, she claimed that she thought the parades she helped run in Auschwitz were simply to meant to humiliate the prisoners by forcing them to go around the camp naked. She claimed that she had no idea that these people were marching towards their death. It is very hard to believe this, considering how Auschwitz must have reeked of death all around them.

It is also important to note that everyone standing trial claimed they didn’t know the purpose of these parades, and that they were just following orders. It is impossible that all 45 camp employees did not know about the thousands of dying women all around them. No one wanted to take the blame, but of course, Irma Grese was in charge, and she was responsible for everything. Of course, the judges at the trial did not believe her testimony. There were far too many witnesses who told stories of her brutality, and the physical evidence at Bergen-Belsen was staggering. At just 22 years old, Irma Grese was hung for her crimes against humanity.

Meet Irma Grese, “The Beautiful Beast” and One Of the Nazis’ Most Feared Guards. AllThatsInteresting.com 2017.