Tenochtitlan: 8 Things You Didn't Know About The Aztec Floating City that Rivaled Venice 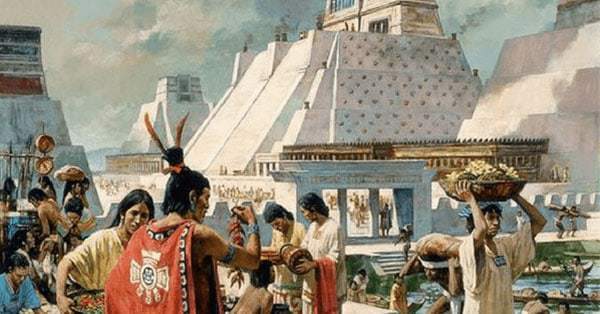 Tenochtitlan: 8 Things You Didn’t Know About The Aztec Floating City that Rivaled Venice

The Spaniards Arrival: Preparing for War and Getting a Luxurious Welcome

Perhaps you arrive at the palace and find a collection of armored Spaniards arriving, looking comically out of place in their metal plates among lightly and brightly dressed natives. These Spaniards are getting a warm welcome, though they might look immensely uncomfortable; they had fully prepared to take the city by force and were armed for battle that day.

An impeccably dressed Montezuma is working through a translator to welcome Cortes and his men. Though the higher class knew that Cortes was no God, rumors of strange deities floated among the hundreds of thousands in the city. A sizeable crowd would surely have been gathered not too far away to see this group of strange men and horses.

Only a few days later the city would be in utter chaos as Cortes and his men decided to kidnap the emperor. Being a foreigner, this would have made your future uncertain as well. A thick tension hung over the city as life continued on as normal as possible. After a while, you think it’s safe to go to the great festival of Toxcatl, after all, the Spaniards forbid sacrifice, so it should be a calmer affair without all the death.

Well, that might have been a mistake. The high-strung Spaniards, fearing a revolt, get a little too jumpy and start killing the nobles and priests at the banquet. Thousands of Aztecs are slaughtered, helpless against Spanish steel. a few thousand unarmed civilians at a feast was easy enough, but now a full revolt was coming. Holding up with the Spanish might still be the best of a plethora of bad options, at least the risk of being a sacrifice was much lower with them.

The Night of Sorrows: Spaniards Driven out, but they Left their Smallpox Behind

When Montezuma is killed, it’s definitely time to get out of there. Montezuma was killed by a mob of his own people while trying to speak for peace, but the prevailing rumor was that the Spanish did the deed. A night escape was necessary. As you gather up your belongings in the barricaded palace you put on as much borrowed armor you can and just pack the essentials. You might be shocked to see Spaniards preparing to leave not by loading up on armor, but sacks of gold, fastening pieces to themselves and slinging great bags of treasure over their shoulders.

The escape is frantic and terrible. The famous Eagle warriors, so impressive in their ceremonial duties around the temple, are now equally terrifying as they swarm around you. The Spanish armor holds, few men are dying, but one-by-one men are tackled and dragged off into the night. Fires illuminate the Temple Mayor in the distance as all of the city, Cortes, and his men witness the hasty sacrifices of the captured Spanish.

You spend your time in the middle of the pack, dodging spears thrown with the deadly atlatl, a device that could accelerate spears to almost 100 mph. the obsidian-edged wooden clubs can’t crack the armor, but most of the men soon sport large gashes in unprotected areas. Even Cortes was badly wounded that night.

In their haste to get off the causeway, many men try to shove through or tiptoe the edge, several men fall in the lake and are literally drowned by their own greed as the bags of treasure pull them to the bottom. A full night of relentless attacks continues, canoe warriors pepper the retreating position with spears and each small island connected to the causeway is full of the elite warriors of the empire.

Finally, you break through to dry land, several thousand men were killed in the retreat but you’re alive and the Spaniards have allies nearby. You look forward to sleep and perhaps some of that excellent Xocolatl chocolate drink to celebrate mere survival. As you take one last look at the impressive city glowing in the moonlight, you see the fires of the great temple as you just make out the distant screams of the Aztec’s last Spanish sacrifices.