Ten Things That You Need To Know About Franco

Ten Things That You Need To Know About Franco 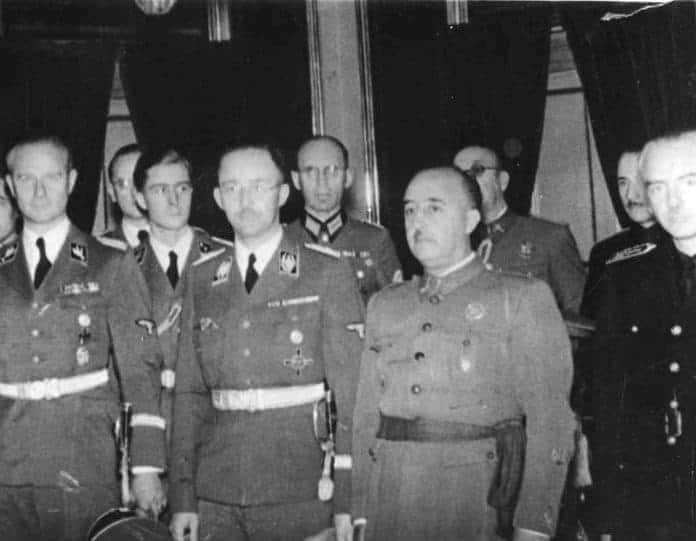 The general and dictator Francisco Franco (1892-1975) ruled  Spain from 1939 until 1975 when he died. He seized power during the bloody Spanish Civil War when, with the help of Hitler and Mussolini, his Nationalist forces overthrow the democratically elected left-wing government of the Second Republic.  Franco styled himself the “El Caudillo” or The Leader.  Franco persecuted political opponents, His rule became more liberal in later years and Spain modernized under his rule.

Franco entered the naval academy and intended to be a naval officer but because of government cutbacks he was forced to enter a military academy and he later graduated as an officer.

His father and grandfather had been naval officers. Joining the army was not as socially acceptable to someone of his class.

Franco volunteered to fight in Spanish Morocco. This colony was wracked by an insurgency. In one attack some 7000 Spanish soldiers had been killed by the Moroccan rebels. Franco fought for many years in Morocco. He earned a reputation as a formidable officer. He was wounded several times during the fighting and received several medals.

Once in Spanish Morocco, a soldier mocked his squeaky voice. Franco drew his revolver and shot the soldier in the head and killed him in front of his entire unit.

Franco was banished to a remote post in the Canary Islands, because of his opposition to the new left-wing government. Franco initially hesitated in his support of the proposed military coup planned by several generals. Franco only became fully committed, however, following the assassination of the leading monarchist José Calvo Sotelo.

After the death of the original leader of the coup in a plane crash. Franco was appointed as the head of the coup and overall commander of the Spanish Nationalist forces.

Franco made contact with Hitler and Mussolini and Fascist Italy, securing arms and other financial support that would continue throughout  the Spanish Civil War (1936-39). The Germans and Italians supplied troops and planes to Franco’s forces and helped to tilt the balance in his favour.

During and after the war, Franco killed many left wing supporters and sympathisers. Many thousands of communists, socialists, and anarchists were executed on the orders of Franco and many, more imprisoned or forced into exile.

Hitler tried to persuade Franco to join the Axis powers during WWII. Th Spanish dictator refused to join in Hitler’s war despite the support given to him by Germany and Italy. Franco did send a division of soldiers to fight with the Nazis in Germany but later withdrew them under pressure from the allies. Fascist Spain never did join the Axis powers during WWII as Franco believed that his country was exhausted after many years of war.

Franco before he died Franco asked King Juan Carlos to become head of state. This happened after his heir apparent was assassinated by Basque terror group ETA.