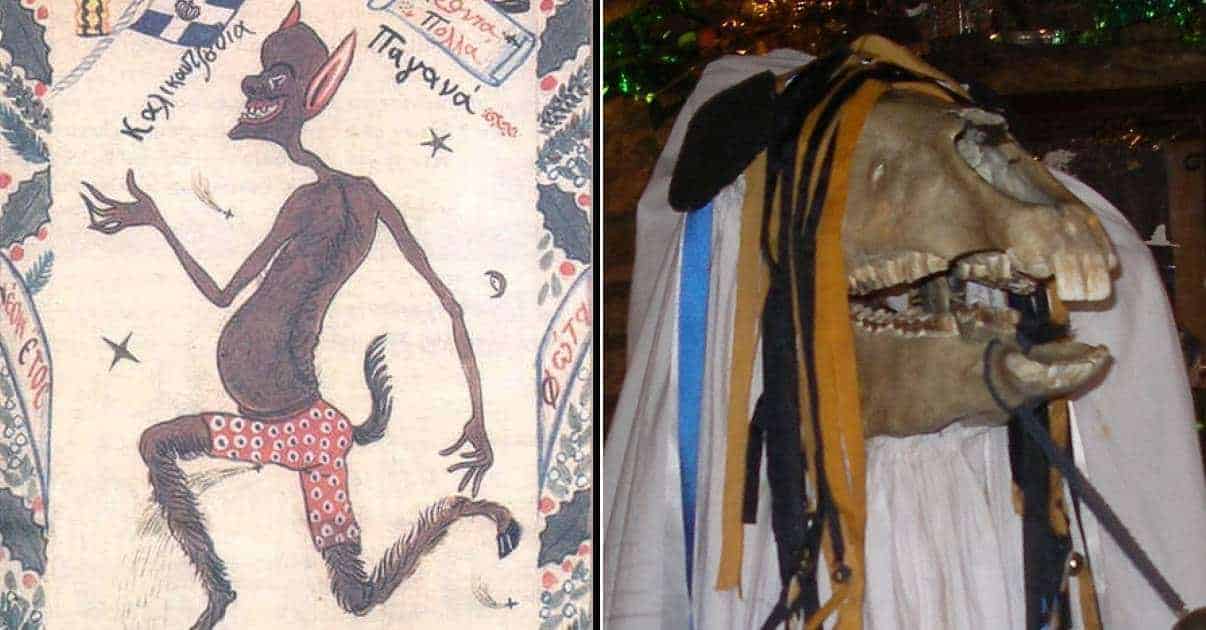 Le Pere Fouettard is a French/Belgium Christmas bogeyman with one foot in history and the other in the pagan past. Like Krampus and the Perchen, he is linked to the purifying/ punishing aspect of whipping-hence his name “Father Whipper.” Dressed in dark robes, with a sooty face and unkempt hair and a beard, children can hear him coming from the sound of the slapping of his whip. Le Pere does not work alone; he also follows St Nicholas from house to house, acting as his punisher, dispensing coal and beatings to the naughty. His original pagan context is lost, so instead, he is given shape by various more historical legends and events.

The most popular story of Le Pere Fouettard dates from around 1150. In this tale, La Pere was either an innkeeper or butcher with particularly evil habits. One day, he and his wife captured three boys on their way to a religious boarding school. They robbed the boys of their money and then disposed of them most gruesomely, slitting their throats, cutting them up- and stewing them.

St Nicholas heard of the crime and resurrected the children. On seeing this miracle, the evil innkeeper repented. He either volunteered to help St Nicholas as penance- or else was forced by the saint to assist him every Christmas, punishing the bad while the Saint rewarded the good.

Other, more historically verifiable events explain La Peres’ dirty face. In 1552, the northeastern French city of Metz was under siege by the forces of Charles V, the Spanish King, and Holy Roman emperor. The anger of the citizens led them to make a likeness of the Emperor and drag it through the city streets and burn it. At the same time, the tanners of Metz had created a grotesque character who punishes children. The two separate effigies somehow married themselves together in the popular mind and became incorporated into the role of Le Pere Fouettard.

Other than having a crone-like appearance, the Italian La Befana isn’t as terrifying as some other European Christmas legends. She was first recorded historically in 1549, in verse by the Italian poet Agnolo Firenzuola. Here La Befana was portrayed as an old and ugly woman. She flew on her broom at night, sometime between January 5 and 6th. She would land on the roofs of houses and, rather like Father Christmas, entered them through the chimney, leaving candles and presents for the good children and coal for the bad. If they were wise, the householders would also have made La Befana an offering of cakes and wine.

This Italian Mother Christmas predates the advent of St Nicholas in Italy. Her name is derived from the Italian for Epiphany: January 6th, the last day of Christmas. This is the day the Magi visited Christ. It is also the traditional time for people to mark the end of the dark days of Winter times and to celebrate the growth of the light of the sun. Both of these aspects combine in the legend of La Befana.

The legend tells how La Befana was an elderly Italian widow at the time of the birth of Christ. While sweeping out her house, she was visited by the Magi who were on their way to find the Christ child. The Wisemen were lost, but La Befana was able to direct them by telling them to follow a large and unusual star. Grateful, the Magi invited the old lady to join them on their journey. However, La Befana refused as she said she had too much housework to do.

However, when she realized she had missed out on seeing the son of god, La Befana was full of regret. So, instead of using the broom to clean, she took to the sky on it and began to roam Italy. Every Epiphany, she imitated The Magi by bestowing her own gifts on good children- and punishing those who were bad with a lump of coal.

However, La Befana is older than Christ. She originates from the symbol of the ‘old lady’ burned in the squares of Italian towns and villages at the end of every Christmas. Her consolation prize of coal, like the whippings of Krampus and the Preschen, was not originally intended as a punishment, but instead representing the cleansing power of the Epiphany fire- the same symbolism imbued in her broom.

Another whipping character from Germany that has taken root in the US state of Pennsylvania is that of Belsnickel. Masked, and dressed in tattered clothes and furs- very much like the alpine Christmas bogeymen-Belsnickel visits children in the early days of December. He comes equipped with a sack of sweets- and a whip. However, Belsnickels’ aim isn’t to punish the naughty and reward the good but to persuade all children to mend their behavior.

Belsnickels’ name matches his dual purpose. It comes from the German for a smack, suffixed with ‘nickel’ for St. Nicholas. This is because, unlike many of his other European counterparts, Belsnickle combines the benign gift-giving aspect of St Nicholas with a more feral festive presence.

Originally native of the Rhineland, Belsnickel accompanied German immigrants to Pennsylvania in the early nineteenth century. The Belsnickel tradition began to be recorded soon afterward. On December 5th, just before St Nicholas day, groups of young men were observed dressing up in skins and furs to celebrate ‘Belsnickle Night.’ They roamed the streets of their settlements, rattling chains and bells and acting boisterously, in imitation of the rites of Krampus.

Elsewhere, Belsnickel, himself was at large. Jacob Brown of Maryland described a visit from Belsnickel sometime around 1830. Browns’ Belsnickel was also called Kriskinkle and sometimes even The Christmas Woman- because he often dressed in women’s clothes. He made his appearance one or two weeks before Christmas. The figure of Belsnickel was probably undertaken by the Father of the house, who had previously absented himself under the pretense of work.

According to Brown, sometime after dark, a mysterious figure in a long robe and hood arrived, bearing a sack crammed with goodies: cakes, fruit and nuts- and a long hazel stick. This character would rap on the window of the house and ask for admittance. The children of the house would only let him in if he answered a question or sang them a song. However, once inside, Belsnickel would scatter the contents of his sack, and the children would dive in to collect the goodies.

As the children fell upon the sweet treats, Belsnickel roamed amongst them, switching them on their backs. This ‘beating’ came to be seen as a warning towards good behavior, but like so many other Christmas switchings, Belsnickels’ beatings had an earlier significance. Like the whippings of the Krampus and the Perchen, it was initially administered as a good luck charm for the children’s well being.