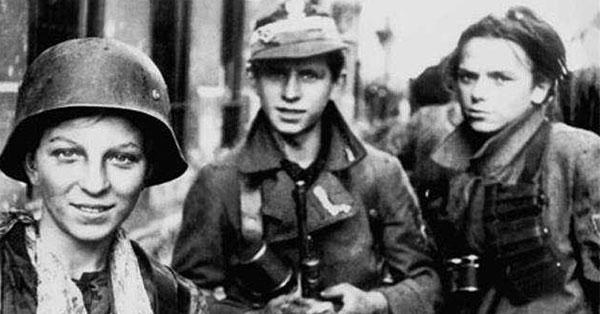 Not everyone in Germany accepted Nazi rule. Sophie Scholl was one of them. Her first inklings about the injustice of the Nazi regime began after she joined the League of German Girls at age 12. Although she enjoyed the games and was quickly promoted to squad leader, Sophie complained about her Jewish friends being barred from the league.

As war broke out, Sophie left secondary school and began auxiliary war work as a nursery teacher. But in 1942, she enrolled at Munich University to study philosophy and biology. It was here her resistance activities took off.

Sophie and her brother Hans were friends with Christoph Probst, the founder of The White Rose movement, an anti-Nazis protest group. Sophie’s boyfriend was posted to the eastern front and she was shocked by his reports of the conditions of the troops as well as the war crimes being committed by the officers. So, surreptitiously she and her friends began to denounce the Nazis.

They began with a leafleting campaign that called upon the German people to rise up: “Nothing is so unworthy of a nation as allowing itself to be governed without opposition by a clique that has yielded to base instinct” read once of the messages “…Western civilization must defend itself against fascism and offer passive resistance, before the nation’s last young man has given his blood on some battlefield.”

The message spread around Germany-the first and the only widespread act of defiance against the Nazis. Sophie, Hans, and Christoph were identified by the Gestapo, tried and executed for treason.

Sophie’s met her death bravely. Her last words were: “How can we expect righteousness to prevail when there is hardly anyone willing to give himself up individually to a righteous cause. Such a fine, sunny day and I have to go, but what does my death matter, if, through us, thousands of people are awakened and stirred to action?”

Born in 1922 in Derechin, Poland, Jewish teenager Gertrude Boyarski enjoyed a normal life with her family-until the German’s invaded. They were then incarcerated in the local ghetto-until on July 24, 1942, the Nazis began a massacre of 3000 Jews. Gertrude’s family, who lived close to the entrance, managed to escape and join partisans in the forest.

But the resistance took their toll and over the next few months, Gertrude watched as every member of her family died before her eyes while resisting the Nazis. Alone, Gertrude went to look for a group that would take on a female combatant. She finally met with a Russian partisan group who were willing to do so. The commanding officer was initially unwilling to take on a woman but when Gertrude told him: “I want to fight and take revenge for my whole family,” he agreed to test her resolve.

Gertrude was left alone on guard duty for two weeks. Situated in the forest a mile from the partisans’ camp, she had nothing but a gun to protect her. Although afraid, she did not give in. Gertrude passed the initiation and lived and fought with the group for 3 years.

Gertrude was true to her word about her revenge. She helped burn down bridges, impeding the German movement of people and supplies. Despite being fired upon by German soldiers while firing a bridge, Gertrude and her companion helped it along by tossing pieces of the burning bridge into the river.

Gertrude married a fellow partisan after the war and moved to the United States.

Andree Borrel was always a rebel. Born in the working-class Paris suburbs in 1919, she had enjoyed boisterous, outdoor activities. But after the German invasion of France, her courage really came into its own.

Andree initially trained as a nurse’s aid. But she used her work as a cover for transporting allied airmen, agents and escaping Jews along an underground railway to Spain. When the network was discovered in 1940, Andree fled to Portugal and then onto England where she volunteered for the SOE.

In 1942, she was one of the first female agents parachuted into France to spy. After making her way to Paris, Andree joined the local resistance network where she was tasked to deliver messages and train and organize members. So impressive was she that by March 1943, 24-year-old Andree was its second in command. In the following month, the group committed 63 acts of sabotage, derailing trains and killing 43 Germans.

Andree was caught on the June 23, 1943 when she and 3 other members were found attacking a power station. Interrogation did not break her. So, one month before D-day, Andree and three other female spies were shipped off to the Natzeiler-Struthof concentration camp.

Natzeiler-Struthof was an all male camp and the only concentration camp on French soil. Andree and her companions were sent there so they would disappear without a trace- part of the ‘Nacht und Nabel” (night and fog) directive. But some of the male prisoners witnessed their arrival. One Brian Townhouse, an artist, knew Andree personally and recognized her at once.

Andree and the other female agents were immediately given a lethal injection of carbolic acid. Andree was pronounced dead and her body stripped for cremation.

But the injection had not killed her. Just before she was placed in the oven, she regained consciousness and attempted to fight off the doctors. They eventually overpowered her-and cremated her alive.