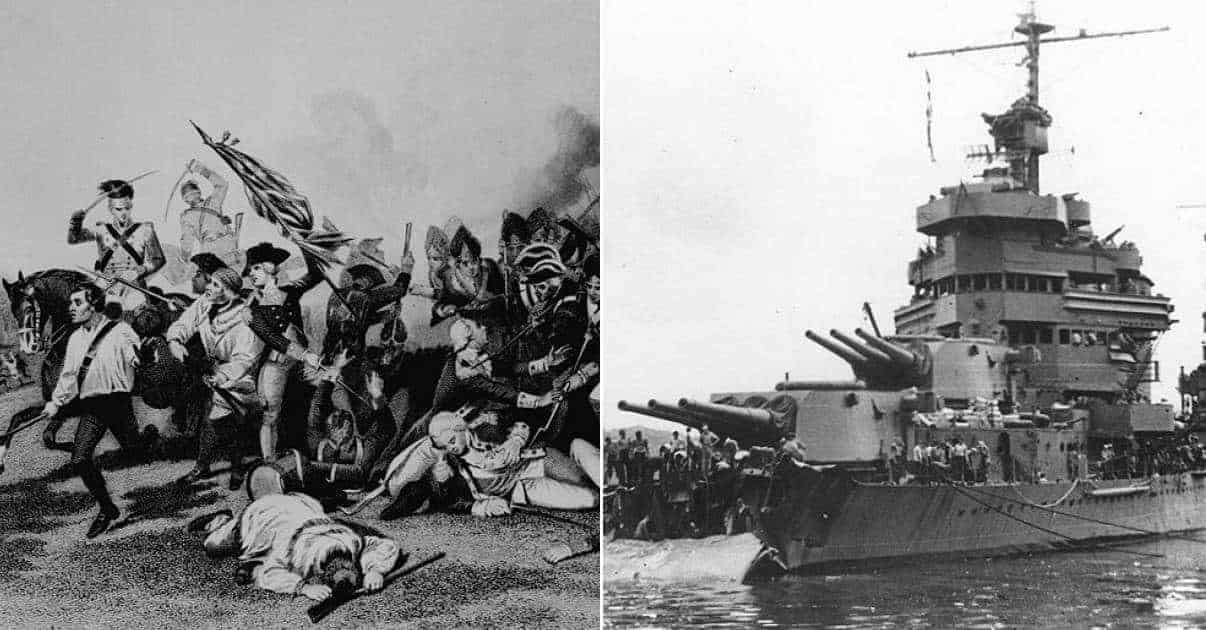 During the Battle of Guadalcanal Japanese Navy operations were directed at reinforcing their troops on the island and harassing the Americans by shelling them at night. The US Navy countered this by attacking Japanese units, and nightly gun battles between American and Japanese ships led to heavy losses on both sides. So many ships were sunk in the waters around Guadalcanal that a portion of them were nicknamed Ironbottom Sound.

The Americans had the advantage of surprise afforded them by the use of radar and opened a gun battle with the severely outgunned Japanese. With the island at their backs and the US cruisers blocking their escape to the open sea, the Japanese fired a “shotgun blast” of long range torpedoes at the American battle line.

Four of the five cruisers were hit. USS Minneapolis, USS Pensacola, and USS New Orleans, all received severe damage. USS Honolulu emerged unscathed but the last American cruiser in the battle line, USS Northampton, was not so lucky. Struck by two of the Japanese torpedoes, Northampton both burned and flooded before being abandoned by its crew. The other three badly damaged cruisers managed to make it to nearby Tulagi; all three were out of action for many months. The Japanese lost one destroyer.

After the attack on Pearl Harbor and the Battle of Savo Island (in which the US Navy lost four heavy cruisers), Tassafaronga was the worst defeat suffered by the United States Navy during the Second World War. It led to changes in the manner of deploying US capital ships and provided further impetus for the development of flashless propellant for the Navy’s big guns. Despite the heavy losses taken by the Navy at Tassafaronga, they did succeed in preventing the Japanese from resupplying their troops, helping the Japanese decision to abandon Guadalcanal at the end of the year.

After the Americans successfully invaded North Africa in Operation Torch in 1942, German and Italian troops were quickly organized to destroy the inexperienced US Army. The Americans were not alone in the region, supported by both Free French and British troops, but the bulk of the fighting at Kasserine was by the American II Corps, commanded by General Lloyd Fredendall.

Fredendall’s opposite was Erwin Rommel, who attacked the American positions in the Atlas Mountains. Rommel pushed against British and American units, who offered stubborn resistance to the Germans despite glaring problems with communication. The American commander remained far behind the lines, which were on terrain of which he had no first-hand experience.

More experienced British units often failed to provide relevant information regarding tactics which they had developed, leaving the Americans in exposed positions and poorly prepared fortifications. American troops had not yet realized the need to dig in deeply and to avoid being bunched closely together when facing enemy barrage. Despite these and other failings, the inexperienced Americans still managed to prevent Rommel from exploiting his initial gains, and eventually managed to stop the German attacks.

The Americans were pushed back more than fifty miles before supporting artillery and counterattacks managed to halt the German thrust. The Americans took heavy casualties in men and equipment, and despite stopping the German attack morale suffered as a result of the losses and the lack of leadership present with the troops.

General Eisenhower relieved Fredendall after Kasserine Pass and he was sent home, in large part because of his failure to instill the necessary discipline in the troops under his command. Fredendall had rarely visited the front lines of his command and was uninformed on many issues which were exposed by the battle. Eisenhower took immediate steps to streamline the Allied chain of command to enhance communications between British, French and American units at all levels, and temporarily assigned a new commander to II Corps – General George Patton.

As part of the United States Army Air Force’s strategic bombing campaign, oil refineries at Ploesti, Romania, were designated to be priority targets. The USAAF wanted to deny access to oil to the German military and to war production. Nine refineries around Ploesti were targeted as a single raid conducted on August 1, 1943.

Called Operation Tidal Wave, the USAAF launched 177 B-24 Liberator heavy bombers at the oil refineries from their bases in the Libyan desert near Benghazi. The flight to the target area was executed at low altitudes and in strict radio silence. These factors contributed to the aircraft becoming strung out during the flight to the targets. Navigational errors by lead planes led to others breaking from the formation to follow the correct flight paths, further weakening the overall formation.

Heavy anti-aircraft fire over the targets and the approaches to them combined with strong fighter attacks on the unescorted bombers to inflict heavy damage to the mission. Many of the bombers failed to find their targets completely and resorted to striking targets of opportunity. Some of the bombers flew so low over their targets that the machine gunners in the B-24’s engaged anti-aircraft gunners on the ground.

Of the 177 bombers which took off on the mission (one was lost in an accident on take-off) 88 returned to their Libyan bases. Of those, more than fifty had extensive battle damage. Three hundred and ten aircrew were killed and another 108 were captured by Axis troops after bailing out or crashing in Romania. Several of the Liberators were forced to land in neutral Turkey; their aircrews were interned.

USAAF officials estimated that up to 40% of the refining capacity at Ploesti was destroyed. They were wrong. Most of the damage sustained was repaired within a few weeks and by September it was admitted that there had been “…no curtailment of overall product output…” at the refineries. By the end of September output of refined oil at Ploesti had actually increased above the rate before the raid.

During the Campaign to defend Philadelphia from capture by the British Washington’s army, soundly defeated at the Battle of Brandywine, redeployed to protect the city from the troops under British commander William Howe. Washington placed a division under Mad Anthony Wayne near Chester, Pennsylvania, to harass the British line of march and possibly capture the enemies supply wagons,

Wayne encamped at Paoli, near the British lines, with about 1,500 men. His encampment was about a mile from that of a larger encampment of Maryland militia, about 2,000 men. Wayne believed his position to be unknown to the British, who had moved little since the Battle of Brandywine. Loyalist spies soon reported Wayne’s position to Howe, who determined to attack the attachment.

On September 20 a British contingent of about 1,200 men approached Wayne’s camp, armed only with bayonets, with the flints removed from their muskets to ensure that no chance shot would give away surprise. They attacked the sleeping Americans shortly before midnight, and Wayne’s men, facing a surprise bayonet attack, were quickly routed. The British drove the Americans from their camp and during pursuit ran into the larger militia encampment, which they quickly routed as well.

About 3,500 American troops were driven from the field by a force one third their size, armed only with bayonets, unable to fire their muskets. The British suffered a total of 4 men killed and seven wounded while thoroughly defeating an entire division.

American losses were over 200 killed or wounded and another 71 captured by the British. The attack at Paoli became known as the Paoli Massacre, largely because of the British use of the bayonet as the sole weapon, but no massacre took place there. The loss of Wayne’s division contributed to the demoralization of the Americans who would soon abandon Philadelphia to Howe.

Exercise Tiger was one of the many full scale rehearsal exercises conducted by the Allies in preparation for Operation Overlord. Tiger was developed to provide training for the American troops scheduled to invade France at Utah Beach, using the British beach at Slapton Sands.

On the morning of April 28, 1944 a flotilla of eight LSTs loaded with American troops, combat engineers, and equipment were operating in Lyme Bay, on the English Channel, when they were attacked by nine German E-Boats. E-Boats were similar to the American PT-Boats and were armed with machine guns and torpedoes. One of the vessels assigned to protect the LSTs was not present due to its having been damaged in a collision with an LST. A replacement escort had not yet arrived.

Four of the LSTs were attacked by the E-Boats. One of the LSTs was damaged by friendly fire as the Americans attempted to engage the E-Boats. Another was set afire by the German attack but managed to make it to shore, although over one hundred Navy officers and sailors were lost. LST-531 was sunk by a torpedo attack, over 400 Army and Navy personnel were lost.

A fourth vessel, LST-507, took the lives of another 202 US Army and Navy servicemen when it sank. Many of the casualties were from hypothermia in the cold waters of Lyme Bay. Others, in a grim foreshadowing of the D-Day invasion, drowned when the weight of their combat gear pulled them underwater.