Ten Amazing Facts About Frederick the Great of Prussia 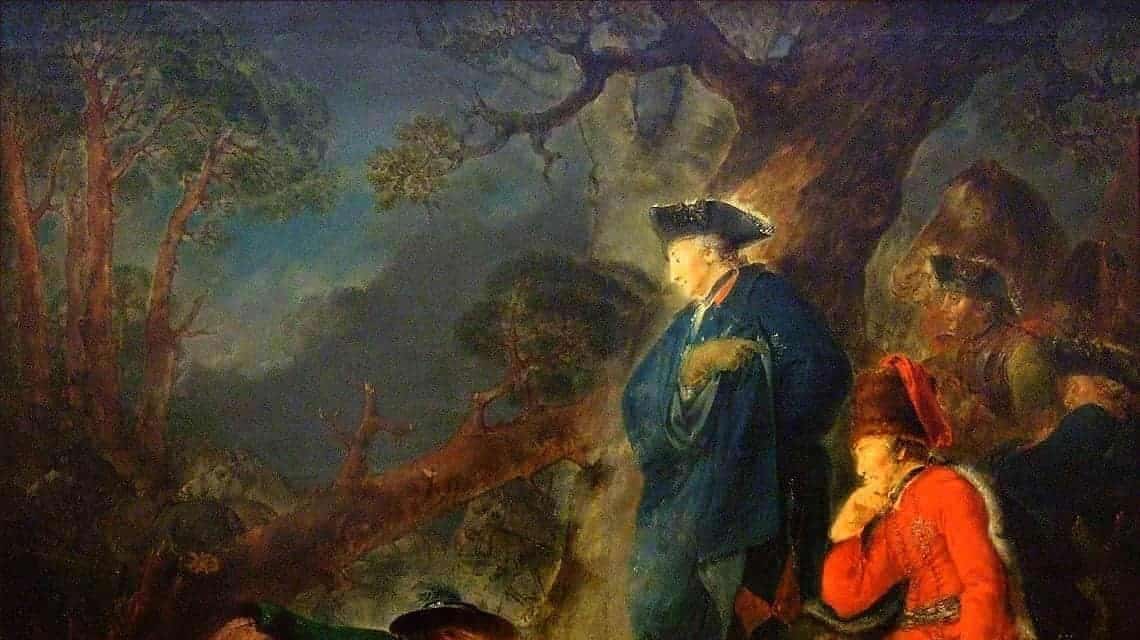 Ten Amazing Facts About Frederick the Great of Prussia

Frederick the Great was one of the most brilliant monarchs in German history. He was king of Prussia in the eighteenth century and he was a brilliant reformer, statesman and administrator. However, he is best known as a great military leader. He was able to expand his kingdom at the expenses of his neighbours and he was to turn Prussia into a major European power. It was under him that the Prussian army became one of the best in Europe. His army was able to inflict major defeats on the French, Austrians and Russians. The victories served to increase his reputation and many came to call him a genius. Frederick was unusually for a soldier and king a very cultured man and renowned for his wit.

However, during the Seven Years War he and his kingdom came close to defeat. Frederick was only saved by the coronation of a new Tsar who was an admirer of Frederick. After the end of the Seven Year’s War, Prussia was to emerge as a real European power and Frederick was revered as one of the most brilliant men of his times. Since that time he has had many admirers and Hitler, in particular admired him and even kept a picture of him in his private rooms at the ‘Wolf’s Lair’ or his headquarters.

Here are then things that you may not know about Frederick the Great.

He had a very unhappy childhood. His father was King and he was a very eccentric fellow and he was obsessed with the military. Frederick’s father wanted a son who would be a great general and make their kingdom a great military power. Frederick was not a very impressive young man, he was slight and weak. He was also a bookworm and loved to play the flute. The son was very different from the father and this led to problems. His father scolded him constantly in public, he often had him punished. There was even an attempt to remove Frederick from the succession and to make his younger brother the heir to the throne of France.

Frederick was so unhappy that he ran away and he was later forced to return home. A young man, his best friend, had helped him to escape and Frederick’s father ordered the execution of the young man and he forced Frederick to watch his best friend beheaded and then imprisoned him for a while as a punishment. This was to make Frederick for life and caused him to have nightmares throughout his life

His genius was apparent from an early age. His father brought him on a campaign with him in order to instil in Frederick some military ardour and make him a ‘man’. By exposing him to war Frederick’s father wanted to make his son a military man. One of the commanders during the campaign was Prince Eugene of Savoy. He was one of the best-known generals in Europe at this time and his tactics are still studied. One day the King of Prussia was complaining about his useless son. Prince Eugene disagreed and stated that Frederick had real abilities.

He was very impressed with the young man and saw him as intelligent and brave and he prophesied a great future for him as a king and as a general. Prince Eugene offered to give the Frederick as few lessons in the science and art of war. This was to have an enormous impact on the young man and Frederick claimed that he owed all his success to the few lessons that he had with the great general.

Frederick military career almost ended before he began. His first battle was a bad defeat and it seemed that his father was right and that Frederick would never be a general. The battle of Mollwitz was the first time that the young king commanded an army and it was a disaster. He was not sure what to do and he had incompetent advisors. He managed to lose the battle even though he had managed to surprise his enemy the Austrians. The enemy were all asleep, but Frederick was not able to take advantage of his great piece of luck. He took too long to deploy his men and this allowed the Austrian to form up a line and in particular, it allowed the Austrian cavalry, to charge Frederick’s own cavalry.

The Prussian cavalry was driven from the field. His infantry was then left exposed and they were worried that they would be surrounded and they began to panic. His general feared for their king and they urged him to flee the battle. He took his generals advice. When he fled he was lucky not to have been captured by some Austrian soldiers. Later, he returned to the battlefield and his generals had been able to retrieve the situation and win the battle. It seemed likely that his generals had wanted to get Frederick away from the battle so that they could take command and he never forgave them.

Frederick was a talented musician and composed several pieces for the flute. The king also composed some symphonies. He was an enlightened monarch who wanted to apply reason to affairs of state in order to benefit the people. Frederick wrote a history of the Great Northern Wars of Charles XII. Frederick also wrote a political work “The Anti-Machiavel” .

He was also a great patron of the arts and he sponsored great artists such as Voltaire, with who he would eventually argue bitterly. Frederick was also a very great builder and he had many beautiful buildings built in Prussia. The king did much to encourage cultural activities and education in his kingdom.

He turned to history for inspiration. Frederick did not have the resources of his enemies. His army was not as big as either France or Russia. Prussia was actually a small country with a small population. So he needed to have the best tactics and strategies. Many of his ideas that he used in his battles came from history.

Frederick studied the histories to develop new strategies for his battles. He studied the battles of Alexander the Great, Cyrus the Great and other ancient kings and generals. Frederick used the tactics that he discovered in history to win battles against much larger armies at Sohr, Rossbach, Leuthen and Liegntitz . Based upon his readings he developed his famous ‘Schwehrpunkt’ manoeuvre.

During the Seven Years’ War, beat the armies of Austria, Russia, France and Sweden. He had no real allies and he fought on by himself. Frederick’s small army was forced to fight on several fronts at once. Frederick sadly remarked that we are “Always running”. The Prussians were able to fend off many attacks on their territory. It was at this time that came to be regarded as the best army in Europe despite the relatively small size of the army.

Frederick was also lucky. He needed two miracles to save him and his kingdom. At one point Frederick was on the point of suicide.

The first occurred after his crushing defeat at Kunersdorf, after which the Prussian army retreated and was on the point of disintegration. Frederick was about to abdicate. Then the impossible happened; the Russians as they were about to advance and capture Berlin, suddenly returned home. They did not know the state of the Prussian army and that they had run out of supplies. The second miracle occurred when Russia abandoned their alliance with the Austrians, his implacable foes. They joined forces with Prussia and were his allies at Burkersdorf for the last battle of the war. However, a message arrived that commanded the Russians to return home. Frederick devised a cunning plan he persuaded the Russian army to stand to attention. This diverted the Austrians and then Frederick launched his entire army against one flank of the AustriansThe plan worked and the Russians had a marvellous view of the battle whilst the Austrians opposed to them stood confused and did not join the battle as Frederick defeated their comrades. This battle was a victory for Frederick and allowed him to dictate peace terms to the Austrians.

He was a master statesman – Frederick was not just great general, but also a great ruler and statesman.

Frederick was a great builder and he did not only build places for himself but build up his kingdom’s infrastructure. Prussia was to have one of the world’s first public school system and it was to have one of the highest literacy rates in the world. Frederick was also interested in agriculture and he introduced the potato into Prussia. Previously, the country had experienced periodic food shortages and when the people began to grow the potato, they no longer had this problem. Frederick also established a law that meant that every peasant had the right to approach him and ask him for a favour. This earned him the nickname of ‘King of the Beggars’.

His opinion was sought by the entire civilised world, and he always gave good advice. He was very popular in America. One little-known fact is that after America defeated Britain, the Americans wrote offered, Frederick’s brother Prince Henry as the King of America. Frederick forbade his brother to take the crown. This was because if Henry was King of America this could antagonise France or Britain and could lead to a war, which an exhausted Prussia could not undertake.

He was a celebrity. His image was very well known and he was referred to as Fritz in Germany. He was even something of a tourist attraction and was regularly visited by the great and the good. He seemed to have enjoyed the attention and even entrained some of his old enemies. These included the Austrian Field-Marshals who had battled him and Kutusov – who was later to be the victor over Napoleon. In fact, Frederick persuaded Kutsov not to retire from the military. Frederick was so famous that even after he died his tomb became a place of pilgrimage. Napoleon worshipped Frederick and studied his battles and tactics.

In 1806 Napoleon destroyed the Prussian army at the battle of Jena, captured Berlin and took up residence in Frederick’s old office before expressing a wish to visit his tomb. Upon entering the crypt, Napoleon approach the tomb and was silent before the tomb for several minutes then he turned to his generals and declaring; “Hats off, gentlemen! If he were alive, we would not be here.” This comment referred to the French victory over the Prussians, Napoleon did not believe that he could have defeated Frederick the Great in battle.

Frederick had a great love of dogs. He always had one with him. Frederick never married and had no children. In many cases, the king only had his dogs for company. Indeed even as he lay dying he was accompanied by his dogs. Frederick’s last recorded words were “Cover the dog, he’s shivering.” He died in his bed with his favourite Italian Greyhound, alongside him. The dog seemed to have a premonition of the death of the king. The clock in Frederick’s room stopped at the time of his death. It has never worked since. His funeral was a national event and the public mourned his passing, because he was such a well-known and popular monarch. Frederick had left his kingdom at peace and prosperous. He also changed the map of Europe forever.